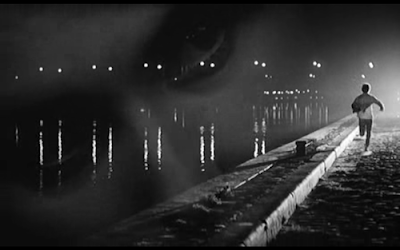 Perched between compulsive citation and the kind of brooding, morbid anxiety that might characterize an older, more world-weary filmmaker, Leos Carax's Boy Meets Girl is about as atypical as directorial debuts get. The film's opening voice-over - set atop a mysterious montage of three images ending in a frenetic view of The River Seine at night and spoken in a craggy voice that could just as easily be a 100-year-old woman or a 12-year-old girl impersonating her grandmother - establishes the movie as the free-associative visions of a dying filmmaker:

But the film is anything but that. Instead, the narration marks the first lines to introduce the world to the 24-year-old French filmmaker and one-time Cahiers du Cinema writer, and they immediately intone a sense of finality and apprehension over both the film and ultimately Carax's career, in which every film continues to feel uncannily like The End of something. Boy Meets Girl was routinely identified upon its release as the resurrection of the youthful spirit of the French New Wave, the kind of film Godard would have been making had he never matured beyond his jazzy, guerrilla-style romances, and it's become something of an accepted idea that it is. The consensus was missing the point though; Carax, an outspoken Godard fan, was making the Last New Wave film, a work that consciously evoked Godard and other Cahiers disciples even as it deliberately set itself apart from the movement. Still today, when we make knee-jerk comparisons of Carax's early work to Godard and Truffaut, we're denying ourselves the ability to see the poetic singularity of Boy Meets Girl.

In fact, if we disregard for a moment any surface resemblances to Godard (the Karina look-alike Mireille Perrier and her Band of Outsiders-esque tap dance, the naked, articulate dialogue, the delinquency motif), a closer spiritual precursor to Boy Meets Girl isn't Breathless or The 400 Blows but rather Last Year at Marienbad, a film that never fit comfortably into the energetic, juvenile umbrella of the New Wave movement. Both films are elusive romances told from the frustrated male perspective, both are situated within a hyper-extended microcosm of reality, or a hypnotic dream space with the appearance of the physical world, and both use a game (Nim in Marienbad, pinball in Boy Meets Girl) as an occasional metaphor for the ubiquity of chance in the progression of their characters. Carax, like Resnais, even halts the flow of the cinematic world in several instances, making figures freeze in time while the main characters continues to move about. All of this suggests that the 24-year-old Carax's concerns were different, and in some cases far broader, than the 30-year-old Godard's. 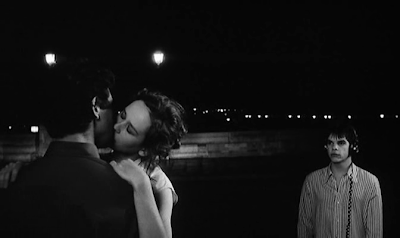 Boy Meets Girl represents the first use of Carax's onscreen surrogate Denis Lavant, a herculean actor (in 1984, a non-actor) who has featured prominently in every Carax movie (with the exception of Pola X) through the recent masterpiece Holy Motors. Lavant plays Alex, the figure at the center of each of Carax's first three films, a young delinquent and loner who keeps a brain-like map of his life experiences behind a painting on the wall of his scantily furnished one-room apartment. The map charts, seemingly arbitrarily, the landmark events in Alex's life, and early on in the film he inscribes "first attempted murder" in the middle of blank wall space after Carax shows him strangling the man whom his recent girlfriend cheated on him with. It seems merely a matter of time before all the empty space on the map will be filled with further experiences of Alex's own design; a self-described "filmmaker" who only dreams up titles of films he'd like to make, there is a sense that Alex is trying to steer his own fate. He uses different chunks (theft, murder, break-up, filmmaking, at one point he refers to having not cheated yet) that can be built into a unifying whole, a complete personality. He's glimpsed a pre-destined shape for himself, and the film is part of his attempt to build himself into that shape.

Through a strange sequence of events, Alex sees it as part of his idealization that he must fall in love with a recently heartbroken failed commercial actress named Mireille (Perrier). For Carax to illustrate this idea, he constructs an unpredictable narrative progression to open the film. After the aforementioned narration, the film reveals Maite (Maïté Nahyr), a woman who's "driving to the mountains" with her baby daughter, and a pair of skies and poles protrude absurdly through her front windshield. When she pulls over to the Seine, she calls a man named Henri and informs him that she'll be throwing his paintings in the river, then runs over to a man named Thomas (Christian Cloarec) to ask him for the date and time before leaving in her car again, dropping a checkered scarf that matches Alex's sport jacket in the process. Alex then arrives and attempts to kill Thomas at the edge of the bridge, eventually pushing him off. This segues to a gloomy-looking Mireille in her apartment wearing a similar black-and-white pattern on her pants. Her boyfriend Bernard (Carroll Brooks) sits on the bed across from her and enigmatically exits the room moments later saying he "can't talk about [something] here and now," leaving Mireille in confusion. The ensuing break-up occurs through the intercom outside the entrance of the apartment building, where the wandering Alex stops to be a front-row witness to the action. Having just been dumped himself, Alex formulates this as a cosmic exchange of heartache, a turn of fate that allows him to pursue Mireille with utter determination. 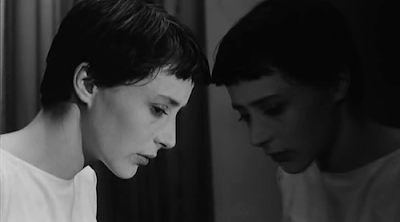 This progression of scenes demonstrates Carax's associational montage, which carries the film along according to impulses, emotions, and sensations. Because of Carax's elliptical editing and his propensity to highlight miniature gestures and seemingly insignificant elements in the mise-en-scène - Thomas grabbing a knife while being strangled, Bernard throwing out some kind of tickets from his coat pocket, the blaring Dead Kennedys song that Mireille listens to while being dumped - it's easy to miss narrative details in this sequence, and throughout Boy Meets Girl in general. I'm still trying to unpack the nature and significance of Maite, a character deliberately aligned with Florence, Alex's actual ex-girlfriend, who, like Maite, also threatened to extinguish her ex's creations (in Alex's case, his letters to her). Furthermore, why does she drop Florence's scarf, or does she just happen to have the same article of clothing? Soon after, Alex watches a couple kissing by the river, and the women, whose entire face is never seen, appears to be Anna Baldaccini, the actress credited as Florence, but the man she is kissing is not Christian Cloarec. Intentional or not, these narrative ambiguities contribute to the film's dizzying self-reflexivity and also suggest the way that Alex has tried to depersonalize and obscure his troubled recent past.

Carax himself - whose name is an anagram of the first and middle names of his birthright Alexander Oscar Dupont - is a prankster, and his complete kinship with the anarchic Alex is transparent. Alex spends his time documenting his experiences on his typewriter and filing old letters he has written, and in order to insure the posterity of his feelings he Xeroxes them. The relationship between his methods of observing and preserving reality and the cinematic apparatus is hinted at by Carax through the repeated visual motif of framing Alex within larger frames: a window overlooking subway stairs, an elevator, a phone booth (the glass of which is broken to reveal its own circular lens), not to mention Alex's tendency to observe intimate moments (Bernard and Mireille's break-up, the lovers' kiss on the bridge) from close distances, like a spectator in a theater. Reflections and doubling also take a strong thematic role. At the Xerox store, Alex stands behind identical twins who are placed in front of a large mirror. Notably, Mireille's apartment features a window overlooking both a courtyard and another apartment building that takes up the entire surface of a wall, and she continually sits against it, allowing her faint reflection to have a ghostly presence in the frame. If Boy Meets Girl deals with how our ideal self(ves) are thwarted and redefined by chance, by the intrusion of unexpected life circumstances (hence pinball), then in the final scene, Carax demonstrates how far the ideal self can be distanced from the real self by returning to the image of happy lovers in a window across the courtyard. Thus, the film acknowledges its own conceit of cinema as a duplication of reality as inherently flawed, while at the same time making it known that this striving for the ideal is nevertheless essential to living. 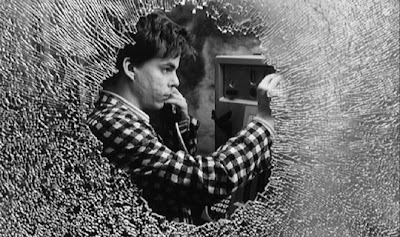 If cinema is not a duplication of reality, it's a construction of it that is subject to its maker's personality and context. Boy Meets Girl, accordingly, is an extremely personal film, as well as a work that is very alert to its own place in cinema culture and film history. During the climactic, titular meeting between Alex and Mireille, Perrier calls explicit attention to her bum tooth and longtime wrinkles, which bluntly separates her from the famously polished Karina. It's as much an example of Carax distancing himself from the shadow of Godard as it is Mireille bearing her soul for Alex, just as a mysterious bourgeois party set piece at the heart of the film (which includes a very meta monologue about silent cinema by a deaf man), with its smoky ambiance and frozen intellectuals, is both a love letter and a farewell to the world of Marienbad. In a broader sense, Carax, the man to propose "the silent talkative film" (see: Fergus Daly and Garin Dowd's book Leos Carax), positions the film in a nebulous middle ground between the potential of silent film and the potential of sound. Like a great deal of mid-century European art films, Boy Meets Girl is entirely post-synched, drawing attention to the divide between the image and the construction of the sonic diegesis. (Its soundscape is one of its most unique features, but that's a topic worthy of another essay.)

In Boy Meets Girl, the setting of Paris seems incidental, and it continues to be in Carax's body of work. The city is nearly unrecognizable through Carax's highly posed, nocturnal universe. Areas of the frame that Carax has no interest in are reduced to murky negative space. Bodies are situated against expanses of black, an effect that is often called upon, illogically, during moments of great introspection. What's in the frame and what's visible is always a highly selective act for Carax, so the setting of Boy Meets Girl feels like an afterthought. Indeed, for a young filmmaker, this counts among the highest praise. Carax's selectivity is mirrored by his understanding that filmmaking is about the search for identity. Like Alex, it's defined by being in a perpetual transitional state. Twenty-eight years after the release of Boy Meets Girl, Carax is still producing work that revels hypnotically in the dark.