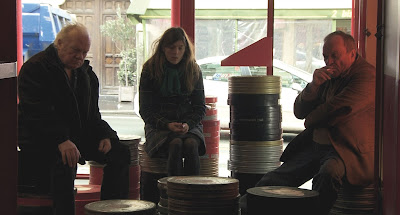 The two main characters in Elise Girard's Belleville Tokyo are named Marie and Julien, and the film is a story of them. They're married, and Marie is expecting a baby, but the relationship is waning because of Julien's infidelity. The story, set in Paris, begins in summer and ends in winter, and title cards indicating each new month make abrupt appearances throughout. Much of the drama is relayed through static wide shots in urban and domestic spaces, and when the camera moves, it moves in succinct, assertive gestures - a pan or a tilt, never on track. Backgrounds loosely reflect inner emotional states and generate aesthetic appreciation, particularly in the final chapter of the film when the troubled couple is surrounded by a gentle snowfall that seems to materialize Marie's sense of self-confidence as she pushes her unstable lover further and further away.

If all of this sounds like a kaleidoscopic pastiche of art films past, it's because it is. Girard's film might as well be titled The Story of Marie and Julien, but it's not just Rivette's presence that hovers over Belleville Tokyo; it's also Rohmer's, Renoir's, Godard's, Varda's, Tati's, Ozu's, De Sica's, etc. Many of the film's inspirations are implicit, but others are openly addressed: only 15 minutes or so have past by the time Girard treats the audience to the extended sight of a poster announcing a Jarmusch retrospective, and though Marie (Valérie Donzelli) is also in the shot receiving a phone call that may or may not have narrative significance, the subject of the shot is Jarmusch. It's as if Girard, in addition to advertising her Jarmusch love, is priming the audience to anticipate the film's snow-covered denouement, which seems to hearken back to Stranger Than Paradise. 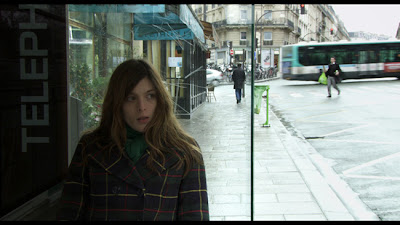 Cinephilia runs amok in Belleville Tokyo, and Girard expresses her boundless enthusiasm by situating the film's plot within Paris' culture of cinephilia. Marie works at an arthouse cinema with an overflowing collection of film prints that is seemingly based around Jean-Marie Rodon's beloved Action Films, both a distributor and a theater of the highest-quality classic films. That Marie's time at work amidst a temple of Hollywood movie posters and the floating scent of celluloid is treated as a respite from the claustrophobia and distress of her personal life is instructive in understanding Girard's own position in her work. The act of filmmaking, and of film viewing, is an escape from the harsh reality of life, but it's as if Marie - and by extension, Girard - doesn't realize that the filmmakers she adores peer deeply into life as a way of getting closer to it and understanding it. When the cinema screens Visconti's L'Innocente and Julien (Jérémie Elkaïm) introduces it, Marie interprets the film's notorious infant murder scene as Julien subtly announcing his fear of the future, and promptly exits the screening in irritation. For Marie, if the cinema too closely approaches reality and too accurately conveys inner emotional states, it makes her uncomfortable; as evidenced by the Intervista poster in her living room, she seems to prefer the fantastical flights of cinema, a safe alcove of movie magic and canonization.

Fittingly, Belleville Tokyo becomes more hysterical the closer it gets to messy emotional truth and more tone-deaf as it approaches the calamitous outcome of Marie and Julien's struggles. My theater laughed harder at the climactic argument between the couple (shown in the film's longest static take) than it did at the earlier scenes in the cinema office between Marie and her slapstick duo of bosses. The latter are willfully delightful, while the former should be harrowing. Belleville Tokyo is fetishistic to the core, which explains why it gets all the surface features right (the unfussy compositional sense, the measured editing, the carefully choreographed but organic blocking) but none of the intangibles. It lacks the probing intelligence of Rohmer, the knowing self-reflexivity of Godard and Rivette, the quotidian calm of Ozu, and the performative chemistry in Jarmusch. It plays like a parade of references splayed out for enthusiasts to pick up on, or for casual viewers seeking inoffensive entertainment to subconsciously acknowledge and feel all the better for it.