TIE: A Selection of Shorts 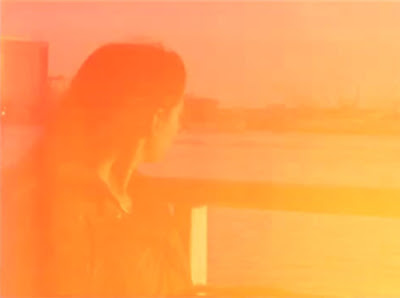 TIE, the International Experimental Cinema Exposition, is a traveling program of experimental films curated by Christopher May that seeks to bring to light the impoverished image of contemporary experimental cinema to a broader filmgoing public. What's more, May is working hard to revive the nearly extinct ghetto of 16mm exhibition, a medium that has become less and less attractive to the profiteers of international cinema curation. TIE's latest program, which recently made a pit stop in Boston, is a collection of short films by mostly American filmmakers ranging from 5-22 minutes that loosely explore the notion of travel and aim to transcend conventional anthropological approaches. Further affinities between the six films reveal themselves throughout the program - the idea of the outsider, the trajectory through a space, certain visual and editorial rhythms - that speak to May's sharpness as a curator.

The program began with Diane Kitchen's Penfield Road, the oldest film of the bunch from 1998. It's a playful meditation on travel, specifically contrasting the ideas of vacation and of merely occupying a place. Kitchen uses postcard pictures rather than here own footage and accumulates a bizarre editing rhythm by alternating back and forth between two images several times before introducing a new image to alternate with the second in the first pair. This somewhat unsettling pictorial rhythm, akin to a line of dominoes reversing their inevitable momentum every other piece, is set to rough, fuzzy ragtime that skips as if spinning on a bad record player. Kitchen's clearly suspending a sense of irony when she shows uninhabited nature alongside dolled-up middle-aged women peering out at the world from an observation tower, but the effect is less often funny and more often stuck between bluntly didactic and curiously thought-provoking. Whether one thinks of these small and iconic figures in the postcards as exploiting the beauty of the natural world or respecting their small roles within it, Kitchen is at least attempting to make the viewer consider the way we inhabit the physical world.

In Death Throes #1, filmmaker Tony Balko goes way beyond Kitchen's rapid photomontage to achieve pure frenzy, an assault of images that paradoxically achieve a mood of relaxation, of quietly taking in the stillness of nature. The effect is not unlike some of Stan Brakhage's shorts that use fast bursts of images to reach for something warm and ephemeral, such as Cat's Cradle or Mothlight. Balko assembles hundreds of fragmented shots of Northern California mountain regions, combining rocks, leaves, dirt, insects, trees, sky, and mountaintops to gradually form a cumulative mental picture of the landscape. Usually the same piece of scenery, no matter how undramatic, will be shown several times in a row from slightly different angles, perhaps some blurred and some not, offering multiple ways of looking at the same thing before the image quickly recedes into the rapid movement of the film and reveals something else. The editing is relentless but often strikingly beautiful, such as when Balko creates an extended stretch of shots that form their own miniature progression. And despite the seeming chaos, one could similarly apply an overarching narrative to the entire short; the images, abstracted from the utter speed and momentum, appear to tell the internal, emotional tale of a sunny hiking trip.

If Balko's objective is to aggressively interrogate the objective to locate the subjective, Chilean filmmaker Jeannette Muñoz' Villatalla takes a more reserved stance on objectivity and aspires to suggest nothing more than the physical world before her camera. Muñoz' film is split into two parts - one in color with field recordings and the other in black and white with no audio - that observe the daily happenings in a remote mountain village in Liguria. So drastic is Muñoz' shift that the project feels like two separate films, the first of which is superior in mood and discipline. It is there that her compositions are at their best, fragmenting the space visually while uniting the village through the quiet, spacious field recordings. In the second chunk of the 22 minute running time, the camera observes a sun-bleached forest where a farmer collects various sticks for an unspecified task. Muñoz' attention to the rhythms of the man's work wavers, making it a somewhat incomplete study of labor and solitude. Instead, her focus drifts to a seemingly endless succession of indifferently-framed shots of forest undergrowth. Still, however unfocused, there's a real sense of an outsider's compassion for her new and humbling surroundings.

The highlight of the showcase was Jonathon Schwartz' Between Gold, which possesses a measure of thematic complexity to coincide with its casual and nuanced observation of an exotic country. The film grew out of Schwartz' brief stay in Istanbul, where he brought along a Bolex and indiscriminately filmed people and places, and it concerns itself with the docking grounds on either sides of the Bosphorus Strait, which mark a divide between Europe and Asia as well a distinct separation of the Turkish areas of Anatolia and Rumelia. Being an economic center, the Strait sees great amounts of back-and-forth migration. Schwartz focuses on this unceasing movement while keeping his images unobtrusive, languid, and ruminative. As much as people are traversing from one space to another, there is also stasis between transportation, and it is during this layover that Schwartz finds his most evocative images of quiet, lonely figures, partly dehumanized in the midst of the ongoing cultural exchange (is Schwartz' insistent non-diegetic soundtrack of dogs barking a suggestion of the ultimate debasement inherent in all this monotony?) yet elevated by the camera's gaze. The finest example of this act of individualization is the film's centerpiece, a long and repetitive passage focusing on a young woman's face, back-lit by the sun, as she rides the ferry from one continent to another. Few films in the program allowed such transcendent moments of introspection, and Between Gold was the humanistic triumph because of it.
Posted by Carson Lund at 4:14 PM