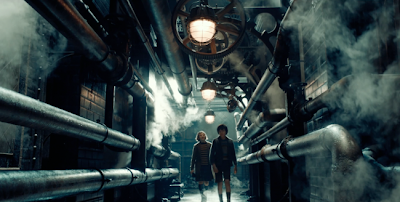 For two films in a row now, Martin Scorsese has staged a climactic scene around the ascension of a staircase. Atop one staircase is light (Shutter Island's lighthouse) and atop the other is time (the massive gears of the clock in his latest, Hugo), two of the primary elements that are manipulated in the creation of cinema. In some ways, this image represents the restless progression of this stage of his career, a continuous climb into the higher reaches of technology in search of new ways to heighten his expression. Of course, this attitude was there from the beginning: look no further than Mean Streets' SnorriCam scene or Taxi Driver's famous aerial tracking shot to witness Scorsese's compulsion towards technical spectacle. But in the 2000's, his awe of new gadgetry has been more pronounced. The blending of Super 35, Technicolor, CGI, and scaled miniatures for The Aviator, the soaring IMAX perspectives of Shine a Light, and now the most drastic shifts to 3D and digital with Hugo have all signaled a heightened desire within the aging director to tackle the many opportunities offered by new equipment.

As if to consciously separate himself from mindless gear-hound filmmakers like Michael Bay and James Cameron though, Scorsese uses new technologies (Alexa, 3D) in Hugo to educate about old ones, the final message being that the technology is negligible, that it's ultimately what one does with it that matters. The central paradox of Hugo - a digital celebration of celluloid and a plea for the importance of film preservation writ in 0's and 1's - is less a hypocrisy than a self-aware attempt to acknowledge the magic of the forebear and then take a leap into the unknown. Scorsese speaks to the mainstream using the tools of the mainstream about the critical responsibility of our culture to actively preserve our works of popular media at a time when the survival of film itself is jeopardized, when spectatorship trends are most schizophrenic, and when the public knowledge of what it takes to make movies is at its nadir. In a word, Hugo is timely, and its near-blockbuster status is sure to raise some awareness of the cinematic heritage Scorsese is building from. 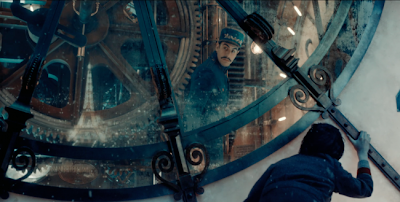 Of course, if it achieves anything of the sort it's because of its accessible family adventure film patina (surely if the message was strong enough in itself Godard's Histoire(s) du Cinéma saga might have been a modest commercial echo of the Twilight franchise). The film is set in the Paris Montparnasse train station in the 1930's and follows the titular character (Asa Butterfield) as he scrounges his way through the walls overseeing the maintenance of the station's many over-sized clocks. Hugo's a mopey orphan who lost his beloved father in a factory accident years before the narrative begins, and therefore sustains a livelihood by refining his skills as a thief, grabbing croissants with the detached precision of Michel in Bresson's Pickpocket (Scorsese, as always, finds some joy in gently recreating the aesthetics of one of his favorite films). It's fitting that the film's somewhat slow and clumsy in establishing Hugo as a rounded individual and a boy whose issues of loneliness are worth investing in, because it turns out that he's, frankly, only of peripheral interest here. It doesn't seem obvious at first, but the embittered toy-shop owner (Ben Kingsley) who routinely barks at Hugo for stealing and/or breaking his gadgets eventually becomes the emotional and thematic center of the film. Conveniently, he's also Georges Méliès.

Early silent cinema starts to bristle from Hugo's sharp, kinetic edges, and it's here where the encylopediac cinephile-cum-technologist Scorsese of the modern day meets the asthmatic, attic-dwelling, projector-hunching Scorsese of old. Hugo's clearly a surrogate of the latter (staring out from behind the holes in the clocks, he sees the train station drama inside a cinematic frame), but it's in line with the gently self-loathing tendencies of this Little Italy filmmaker that what Hugo observes and explores is of greater emphasis than what he feels. His self-proclaimed "adventures" with Méliès' goddaughter Isabelle (Chloë Grace Moretz) - whom he also, for good reason, happens to harbor a bit of a crush on - lead the two to unlocking the toy-shop owner's true identity through a series of narrative incidents involving Hugo's ancient broken automaton and a silent film scholar working at a Parisian library. What ensues with Kingsley illuminates what a classic Scorsese character Méliès really is; isolated and repressive, he is a man, like many of the director's protagonists, suffering because of his inability to come to terms with the past.

The cathartic transformation of this tragic figure is not as convincing as it is in some of Scorsese's recent immersive character studies (Kingsley's heart suddenly swells when he spies a screening of one of his last surviving film prints), but the better to launch Scorsese into the passage of the film he cares about most: the heartfelt seminar on Méliès' invaluable contribution to cinema. Hugo presents a succinct history of the early spectacle filmmaker that is never once dry or academic, delighting in three-dimensionally recreating his already magical output in joyous bursts of color, smoke, garish costumes, and cardboard sets. The comparatively flat, tableau look of these recreations only underlines what magic Méliès was able to bring to the screen with mere two-dimensionality. Scorsese can't resist the gag of putting himself in the film briefly in reference to the pioneer's own onscreen efforts, but for the most part Méliès' life and work is all there unfiltered: the glass studio, the many enthusiastic laborers, the childlike dedication and delight he brought to the process, and the magician's urge to enthrall.

Hugo's film history mania does not end there. A flip-book held by Hugo at Méliès' toy store is a tribute to Eadweard Muybridge, the English photographer who took the first steps towards the moving image. Hugo's frightful cling to the outside of the clock at the top of the station recalls Harold Lloyd's even more terrifying - and certainly more vulnerable - stunt in his Safety Last!, which is also the film viewed by Hugo and Isabelle when they sneak into a theater earlier in the film. Moretz manages to evoke something of Lilian Gish in her awestruck expressionism, which is probably why it's no surprise that the most cloying parts of the film are when she opens her mouth, spewing the forced intellectualism of an overeager European student; Gish didn't have to speak to send audiences to worship. This is to say nothing of Hugo's structural reliance on two of the most iconic motifs in film history: trains and clocks.

Scorsese integrates this dense pastiche with great fluidity and visual energy, animating his Paris of the imagination with ubiquitous smoke shoots, vibrant colors, and a restlessly mobile camera (if Robert Richardson is not awarded in some capacity for his brilliant cinematography, it's a disservice to the dignity of the medium). What's more, the film makes a rare argument for the legitimacy of the much-maligned 3D format. Near the conclusion of the film, Scorsese throws in a dolly zoom (famously first invented by Hitchcock for Vertigo and later used by Scorsese in Goodfellas) with the added disorientation and depth of the 3D to create an image that tricks the viewer into thinking Ben Kingsley is literally floating in space, gloriously disconnected from the background. It's a spectacle that not even Méliès, despite his innovative wizardy, could have dreamed of.
Posted by Carson Lund at 2:37 PM

Have a SUPER weekend !