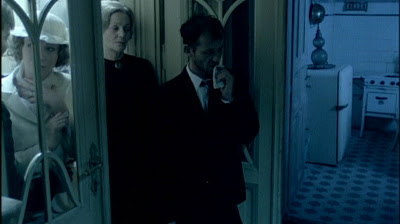 Just before Bela Tarr finally settled on the characteristic black-and-white, long-take formalism that he's become widely respected for in his later work, he made Almanac of Fall, a jarring transitional piece that attempts to suddenly marry the freewheeling social realism of his early career to a sophisticated and rigorous visual style. It's a social drama perched uneasily between down-to-earth sympathy and the more cosmic observation of films like Satantango and Werckmeister Harmonies, and as a result it's never fully satisfying as narrative or as allegory. When placed within the context of Tarr's artistic progression, however, it's a compelling work, flirting as it does with all of the cinematic staples the director would eventually fully embrace. Set entirely in an old apartment that feels at once cramped and labyrinthine, the film navigates the conniving power struggles of an aging woman (Hédi Temessy), her greedy and immoral son, his former teacher (Pál Hetényi), a housemaid who tends to the woman's health (Erika Bodnár), and her discontented partner (Tarr regular Miklós Székely B.). Tarr sticks rigidly to the simplicity of this scenario, never leaving the apartment and mostly unveiling the drama through long two-character exchanges. For the modesty alone, not to mention the implicit challenge of keeping things lively and interesting in such a limiting set-up, Almanac of Fall is an admirable exercise.

The flip side of the coin is that as much as Tarr's ingenuity in framing the central drama is praiseworthy, the content frequently cannot hold its own. Despite the ubiquity of dialogue and character, the film is oddly one of Tarr's least propulsive, searching desperately for quite a while to find some semblance of narrative momentum in the lives of these downtrodden and unhappy individuals. Eventually that kick does arrive when the maid sleeps with the teacher who is boarding at the apartment in the event of severe economic hardship, a mostly offscreen sexual encounter that slowly unleashes bitterness and jealousy in her partner, distrust from her client, and heightened sexual desire from the woman's son. Before this point, however, the film is frustratingly stagnant, reducible to a series of one-sided conversations in which one character muses about anything from his or her existential crises to simple day-to-day money issues. This is a very specific milieu of post-Communist Hungary that Tarr is zeroing in on here, the same context he would go on to symbolically deconstruct later in his career, and as such we get an up-close-and-personal understanding of the tepid and confused social atmosphere. The early dialogues often go unanswered by the listening party, a suggestion that the struggles of an individual in this climate cannot be solved or soothed by anyone else. Everyone is on their own, fighting their own battles, be it economic, political, social, or sexual.

To express this unrest, Tarr uses a garish color palette of hot reds and murky bluish-greens. Dictated less, as far as I can tell, by specific symbolical purposes and more by a general air of heightened emotion, these colors emanate from room to room with seemingly no domestic logic; a splash of green will glow in a backroom as if an obscure scientific experiment is going on while a face in the foreground is smacked by an orange light that seems to be shooting from the floor. At several points, the black boots of the teacher appear malicious as they trudge through the living room of chiaroscuro red and black. (Already, it's clear that Tarr is establishing a potent shorthand for black boots and pitch-black pea coats, a wardrobe pulled from noir that nonetheless has its own distinct flavor in Tarr's oeuvre.) Other times, the light is less harsh, almost as soft as the colors in Kieslowski's The Double Life of Veronique, particularly in an early scene of rare camaraderie between the woman and her nurse where the two laugh and discuss the nurse's romantic endeavors. Still, Tarr's continued use of lurid, unreal shades manages to extract the buried sense of anger that Temessy is able to so thinly veil towards the nurse until later in the film. 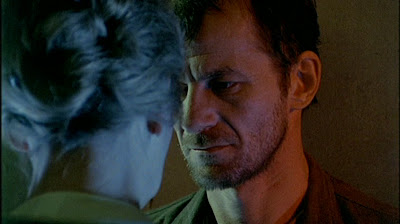 In fact, the film's best scenes are marked by these exchanges where an emotional subtext boils beneath the mostly calm dispositions of the two characters speaking. When the nurse's partner shaves the face of the teacher - whose sexual behavior with the nurse he is only vaguely aware of - Tarr's camera slowly circles the two, capturing the illicit bloodlust of the scene, the fact that he could dig right into the teacher's face at any time. Furthermore, Tarr's uncomfortably intimate sound design lays bare all the quiet breathing, grunting, and scraping, which uncovers an implicitly homoerotic tension as well. Yet later, Tarr's clever mise-en-scene can't fully justify the more one-dimensional realization of the bitter emotional undercurrent between the two: a startling shot from beneath a glass (or plastic?) floor watching as the nurse's partner violently beats the teacher into it. It's a moment that's more exciting for the unexpected way Tarr shoots it than for the actual act of violence onscreen. More effective are the instances when the outbursts explode to the fore after long and tense discussions, such as the one between the woman's son and the teacher in which the son interrogates the teacher about the presence of his mother's valuable piece of jewelry in the interest of selling it and running away with the nurse, eventually holding a broken glass up to his neck in ugly greed. The whole affair turns into a game of violent and scheming one-upmanship, with each of the characters pulling their own selfish pranks to achieve money or sex.

If Bergman's heated chamber dramas were marked by their firm establishment of a single space to highlight the insanity of monotony, then Tarr's is notable for its stubborn refusal to make the stage remotely recognizable from one moment to the next. The old woman's apartment is seemingly medium-sized and traditionally laid-out, but Tarr's searching camera makes it so that every room feels new, some serpentine diversion from the central plot of the house. Much of the scenes are shot in roving telephoto from behind indistinct foreground objects, focusing on the haggard faces yet never losing sight of the larger space in which they speak. One can sense Tarr beginning to distance himself from his characters until finally deciding to settle on an almost cosmic perspective in later films; one such clue comes early on when mother and son argue and the camera slithers back and forth from behind an indoor gate, occasionally sliding behind total blackness in a way that recalls the opening scene of voyeurism in The Man From London. Still, the ultimate sensibility of Almanac of Fall is not nearly as complex or open as those later masterworks. A final scene of atonal celebration in which all the characters' frustrations with each other seem to have been extinguished cements the bleak message Tarr is conveying; set to a pop song whose thesis is the inevitability of fate, the suggestion is that these people will remain deadlocked in mutual tension no matter how hard they try to break free from their dour situation, as if only an outside force can pave the way to happiness and stability. As Tarr's career continued, that force would become abstracted and untrustworthy, and his desperate search for the dignity of individuals would become increasingly nuanced and hopeful.
Posted by Carson Lund at 10:56 PM