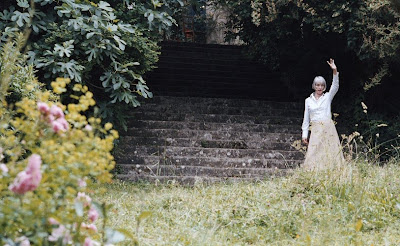 Early on in Olivier Assayas' Summer Hours, a group of young kids, the grandchildren of an old and widowed art collector named Hélène (Edith Scob), spontaneously climb a small tree, their arms reaching up into the elongated branches with tireless determination. It's an offhand moment of rapture that actually proves to be a visual summation of the film's many disparate themes, a way of eloquently signaling that they are all bound to the same flow of nature, left to branch off in different directions. So, too, are the children who climb the tree, just as their parents - the estranged but loving trio of Frédéric (Charles Berling), Jérémie (Jérémie Renier), and Adrienne (Juliette Binoche) - have been pulled apart by the shifting currents of their respective lives. The image is part of a series of extensive steadicam shots capturing the hustle-bustle of a family get-together for Hélène's 75th birthday party at her lavishly old-fashioned country home, the family stomping ground for several generations and a storage unit for the rare artwork of Hélène's uncle Paul Berthier as well as a cornucopia of "bric-a-brac from another era." Assayas' fluidly cooperative camera makes the joyousness of the gathering readily apparent, but the film slowly reveals layers of melancholy in the withholding interactions of the family members, in the sense that the robust house is now underused, and especially in Hélène's acknowledgment of her impending mortality, which raises the question of what to do with her and Paul's legacy.

What follows is a knockout scene of Hélène speaking with her longtime friend and housemaid Éloïse (Isabelle Sadoyan) in the now-empty household presumably later in the day after the family has left. They speak calmly but mournfully about the state of the house, the party that day, and Hélène's lingering feelings of isolation and anxiety regarding her children and their willingness to pass down the relics of family history to their own offspring. But the key to this sad, powerful scene lies not in Assayas' casually revealing dialogue but in his restrained staging and mise-en-scene. If the ubiquitous movement of the party suggested a celebration of life, here Assayas' employs a two simple, static medium shots of Hélène and Éloïse. The whole room is awash in the cool blue of dusk offset by the vibrant oranges of indoor lamps in the background, Assayas being less interested in photographic realism than he is in telegraphing the mood through the lighting. It's the film's most tragic scene because we know death is around the corner, but Assayas doesn't belabor the point. Abruptly after, the film leaps ahead three months to a point when the family matriarch has passed away. So as to keep the melodrama to a minimum, Assayas exposes the aftermath in two succinct shots of Frédéric and Adrienne struggling to maintain their emotional control in private and public spaces. In a small gust of editorial wind, Summer Hours has launched into its second and most thematically dense chapter.

If the opening functioned as a way to loosely establish all of the nuances of character and modicums of family history the film parses out, the rest of the time Assayas spends taking these seeds and letting them grow, exploring their modulations over time and in the throes of familial tragedy. Long-winded legal dealings and household art auctions are not normally fodder for riveting film drama, but here Assayas is able to casually reveal all the emotional tensions among the siblings that lie silently beneath the mundane formalities. In one of their first scenes of reconnection after Hélène's death, conflicts of interest arise between Frédéric, Adrienne, and Jérémie, the former interested in maintaining the summer home as a bearer of charged memories, with the other two finding it more financially plausible to abandon the house to prevent it from becoming just an uninhabited money box. The struggle is between holding on to intimate personal history while also trying to remain reasonable in the face of a generation that cares less and less about such archaic indicators of value. For Frédéric, a Paris-based economist who is ironically the most sentimental of the three, the implicit meaning of the house is too strong to simply monetize, while Adrienne and Jérémie, both of whom have pursued careers in other countries (America and Japan, respectively), can't see the concrete value in what are, for them, merely abstract and disembodied markers of the past. 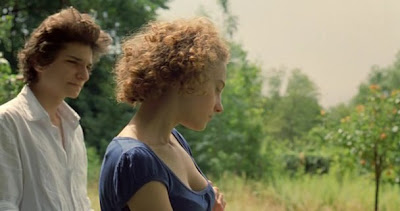 This also hints at another of the themes Assayas is targeting: the irresolvable paradox of globalization. While the world strains to "connect" and further "dissolve" boundaries of nations with business and industry, it actually only creates an increasing alienation, manifested in the distance clearly felt between the siblings. The geographical distance from the house itself indeed proves to be a crucial factor in the decision-making of the characters when it really shouldn't have much to do with the preservation of one's own personal history. Jérémie, a businessman for Puma, and Adrienne, a designer attracted to modern style, have made their personal disconnection cultural. In their clothing, their speech patterns, and their views on the world, they have unintentionally separated themselves from the life created by Hélène and her painter uncle to the point where the placement of a decades-old vase in a museum or in an old house has become an entirely arbitrary and negligible consideration. Frédéric, on the other hand, given his relative proximity to the objects and the immediate family he still intends to pass them down to sees the dissolution of evocative family artwork to the level of vain public voyeurism to be sad and lamentable.

In spite of all these seemingly easy areas for critical objectivity, Assayas remains neutral and sensitive to the individual concerns of his characters. He's not making any generalized judgments about the increasing blindness of a younger generation towards the sophistication of an older one, or something like that. In fact, the film's uplifting ending manages to strike conflicting chords without trying to resolve them: a raucous gathering of adolescents, lead by Frédéric's daughter Sylvie (Alice de Lencquesaing), storm Hélène's old home just before its entry on the market, throwing the kind of elaborate summer party most high school kids would dream of. The scene is light and airy, filled with joy as Assayas' camera once again swoops in and out of the opulent rooms (now barren) in extended takes. Although most of the kids are obviously quite oblivious to the nature of the house they're trampling through, Assayas seems to be celebrating the idea that it's now a blank slate where new memories can be formed. This doesn't need to mean that the past is neglected either - Sylvie, in a scene that feels like Assayas' tribute to Claire's Knee, is overcome by the fleeting sensation of one of the paintings in the house, for she is standing right in the grassy meadow where it was made.

Moments before the party in Summer Hours' chronology is a short sequence where Éloïse returns to the house for the last time, peering in the windows at the spaces once filled with furnishings and life. Assayas' shoots the scene from inside the house looking out as Éloïse drifts by the windows. Is it from the house's perspective or Hélène's? Either way, it suggests a separate consciousness that lasts beyond living humans, a consciousness of place and history. Not only does this signal Assayas' interest in structural mirroring (the film begins with a scene of joy and then one of sadness and ends with a scene of sadness and then one of joy), but it also makes the case that both these seemingly opposite emotions spring from the same source, exist side by side. That's the totality of human experience right there, working in tandem in two elegantly simple scenes.
Posted by Carson Lund at 5:39 PM

I watched this film soon after my own Grandmother passed away and found it to be a cathartic experience. It doesn't jump out at you, but is a film that lets you contemplate life and death and time passing. It is very elegant and reserved. I enjoyed this film a lot.

Thanks for the comment, Jonny. It definitely does have a poignant way of touching upon personal experiences. It's quite "universal", and as much I feel dumb using that word, it really is in a decidedly unsentimental fashion.