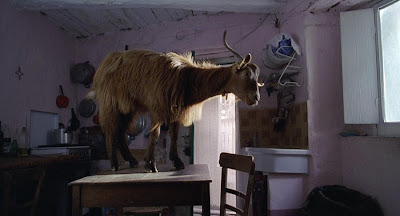 It's quite a magical transfiguration how the smoke that fills the frame in the opening shot of Michelangelo Frammartino's Le Quattro Volte comes to be freighted with such expansive significance by the end of the film. The film's title, translated as either The Four Times or The Four Lives, has rather clear meaning in terms of its loose, suggestive narrative trajectory: in a small medieval Italian village perched atop steep mountains, Frammartino covers the four transformations of an object (human, animal, natural, material) that he posits to be the universal cycle of nature. An old, coughing goat herder (Giuseppe Fuda) dies and gives way to a baby goat, who then dies next to a tree, its decomposing corpse feeding life into the tree which ultimately is chopped down and used for the production of charcoal. This description nails down the entirety of the narrative, but it's beyond that the film achieves such an epic and unique meditation on life, death, and nature. The presence of the smoke at the beginning of the film is either an example of an "end is the beginning" storytelling maneuver or it's simply an excuse for Frammartino to prime the viewer for the eventual metaphysical discovery that the smoke is more than smoke, just as everything in his cosmically interconnected vision of nature has a multifaceted history behind its surface appearance.

An amusing oversight in the majority of synopses for the film place the elderly shepherd at the center of the "plot", as if he's the axis around which everything revolves, and as if the film can't be swallowed without a distinct point of human empathy. Frammartino, I imagine, would likely get a laugh out of this, because what his film is more precisely getting at is the relative inconsequentiality of the human in the vast order of nature. Le Quattro Volte merely begins with the human (or to be more exact, it begins with the smoke, the vessel in which only traces of a life form are returned back to the atmosphere) and ends somewhere far more permanent and intangible. This is not to say that the film is smug or reductive in its representation of humanity (quite the contrary as Frammartino's long attentiveness to the contours of the shepherd's face or the reliance upon spiritual folklore that marks his daily routine suggests a heightened sensitivity to the dignity of human beings in such an anti-modern, agrarian environment), just that it realizes and even celebrates the inevitable smallness of our place in the universe.

The film's elliptical progression is built around mini, self-contained action narratives (when I say action, I mean these scenes gather an enveloping power and story arch based purely on the physical behaviors within the frame). In the opening segment - the first of four separated by seconds of black leader that strongly suggest moments of reincarnation - the shepherd, a man clearly dying from some ailment, must trek down to the village church at night to retrieve a refill of his special medicine, which in adherence to a long-standing method of folk healing is the dust swept up from the floor of the church, presumably thought to be "holy". Normally, the shepherd trades his goat milk for a batch of the church dust but in this instance has no option when he discovers that the church is locked. Frammartino follows his odyssey of desperation in fixed takes, but he also keeps his distance. In such episodes, the film exhibits an omniscient foresight, asking us not to immerse ourselves in fear for the shepherd's life but to observe casually and prepare for what's next. This forward-thinking quality most closely resembles that of nature, which in Le Quattro Volte is seemingly always a step ahead, ready to produce newer life forms out of the rubbish of old. 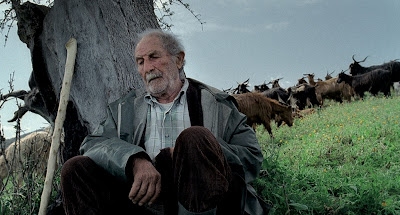 The best of these vignettes, and exactly what the film neutrally advises us to prepare for, is a marvel of choreography that extends for several minutes. In it, a church procession marches down the street in one of Frammartino's recurring high-angle shots on the morning following the shepherd's search for the medicine. The composition is precisely structured: the fenced-in herd of goats appears on the left side of the frame, the street cuts across the middle, and an inconveniently-placed truck sits on a hill on the right side. Miraculously, Frammartino stages (or does he?) a dramatic series of events in which the shepherd's faithful dog tries desperately to alarm the passersby of the discrepancy in his owner's routine, barking and jumping around. The procession understandably doesn't heed the dog's unreadable warning, barging through to the other side of the street wherein Frammartino's camera position pans 270 degrees into another exquisite framing of a wooded street. The dog returns to terrorize a stray worshipper and then dislodge the truck from its position to crash directly into the goat fence, both actions occurring seemingly unintentionally. Despite the mammoth length of the scene and relative distance between pivotal points in the shot, there is a supreme sense of slapstick comic timing that raises the tantalizing question of directorial intrusion or natural absurdity. Given the difficulty of directing animals with this amount of shocking precision, I would feel inclined to agree with the latter, which only strengthens the film's revelatory view of nature as a force bearing a separate, universal consciousness.

Once the goats have escaped from their enclosure, they investigate the shepherd's grounds, finding him gasping lethargically for life in his bed. Upon the man's expected death the film launches into its second section, inaugurated by a startling shot of a white calf dropping from between its mother's hind legs. This is the film's most persuasive hint towards a theme of reincarnation; Frammartino certainly doesn't spell his ideas out, but he doesn't cloak them in deep obscurity either. The calf is slow to adjust to the world, and the film responds by casting a glow of freshness upon objects. In a barn lit only by cracks of beaming sunlight, the group of young goats experience the falling of a broom with mutual bemusement. A pack mentality and eventually a growing need for competition arises, until suddenly the white calf is stranded in a ditch during one of the daily herds through the countryside. Frammartino expertly manages his minimalist soundtrack, conveying as great a sensation of loss and isolation in the sudden absence of the hitherto omnipresent clatter of bells as in the melancholy image of the calf alone in the forest, "baah-ing" with a fear of the unfamiliar (a moment that is, I should add, nearly as moving as the final scene of Au Hasard Balthasar.) 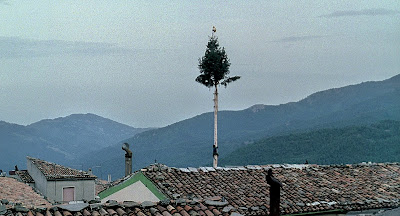 Frammartino's evocation of the subsequent transformation is remarkably subtle and free of emotional manipulation (we are talking about the stranding and innocent death of an adorable young animal here). Instead, the expected strategy is reversed and the sequence is unusually uplifting, with a series of the same landscape shot in different seasons containing the tree the calf last laid down under, a slight aesthetic move that allows for a mere inference towards the animal's fate while acknowledging the idea of seasonal renewal. Adding a layer of absurdist comedy to the mix is the next narrative progression involving a gang of gung-ho civilians cutting down the tree to embark on some weird celebratory ritual back in the village. The shot of the treetop slowly rising with human force above the thatched roofing of the village, accompanied only by the faint sounds of camaraderie, is a particularly memorable one, humorously indicating man's ceaseless drive to claim and manipulate nature.

Le Quattro Volte doesn't stop there though, ensuring that although the tree (an amalgam of both the shepherd and the calf's life forms) was stolen from its place in the ground for arguably trivial human purposes, it will be returned to the Earth in a more diffuse manner, spreading through the smoke of the charcoal production across the many vast and misty mountains that Frammartino carefully photographs throughout the film. Rather than belittling to human experience, this is a graceful and humble nod to the ultimate possession of our souls to the Earth in which we reside and not simply in the domain of a personal lifespan. Lest I sound too abstract and poetic (such an opaque, wordless film will do that to you), it's important to mention that Frammartino has crafted an elegant visual essay that can really only be described in such terms. But rather than being intellectually exhausting, it's an inviting, rewarding work, a soft punch right to the frothy, ambiguous gut of emotions and feelings, and even as it elicits dense allusions to the cyclical theories of Pythagoras and the alarming illogicality of village folklore, it need not be reduced to linguistic justifications.
Posted by Carson Lund at 3:40 PM