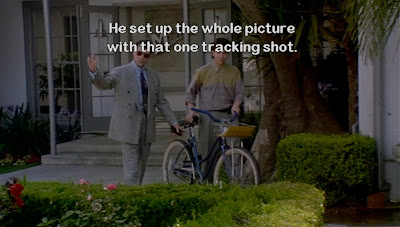 Like Orson Welles' Touch of Evil, a film self-consciously referenced a number of times throughout, Robert Altman's The Player lays all of its thematic preoccupations and metafictional wizardy bare in its opening credit sequence, a several-minute long, expertly choreographed tracking shot around a fictional Hollywood studio lot. Just as he's acknowledging the classical, novel tendency for a film to boast one spectacular, technically overwhelming shot amidst an otherwise traditional mise-en-scene, Altman's also proving to offer his film's most vital gifts there, shoving the keys to understanding the picture down the audience's collective throat before it has even formally started. This is not to say that the film proper is without its substance, but only that its substance is a mere expansion of what is telegraphed in this marvelous credit sequence. Altman does not load his Hollywood satire with any new inquiries once its thriller plot has begun, but rather elucidates and makes palatable the concerns he has already addressed so succinctly. In a word, the credit sequence of The Player is the very core of the film, a triumphant, self-contained short film in its own right that says about as much as needs to be said from a cynic's standpoint about the current money-hungry state of the Hollywood movie business. 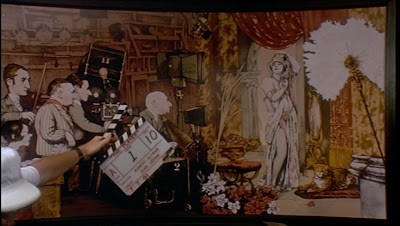 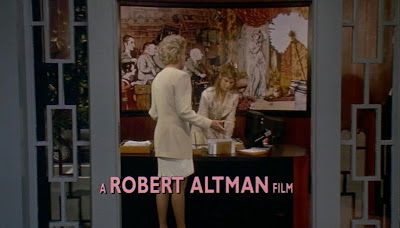 The first thing we see is a uniquely implicit clue towards the film's metafictional nature, its self-reflexive commentary on movies and the movie business. First revealing what is presumably the background of a movie set with a clapper detailing the production specs of The Player itself held up in front of it, the camera then pulls back to place this image inside the frame of an office door within which everyday business dealings are occurring. This is when we see the standard, expected text overlay "A Robert Altman Film", even when we've already seen Altman's name sketched on the clapper. This duplication of stimuli suggests that both the film proper and the film(s) within a film (or rather, the deeply self-conscious thriller plot) are overseen by Altman, that there is nothing that gets by the director, the ultimate designer. 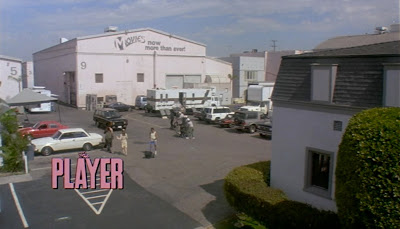 After the camera completes its graceful exit from the office entrance, it swoops into the air to reveal the entire studio parking lot. A sound-stage in the background relays the studio's cheeky, vague motto ("MOVIES: Now more than ever!"), which forever looms over the industry professionals like the eyes of Doctor T. J. Eckleburg in The Great Gatsby. It's a perplexing credo given the fact that the majority opinion among the staff seems to be that the Golden Age was ultimately the era of creative prosperity (so why are more necessary?), and also because if movies are needed in the present more than ever, this implies that the quantity of movies must skyrocket, in turn suggesting that the quality of movies must plummet. 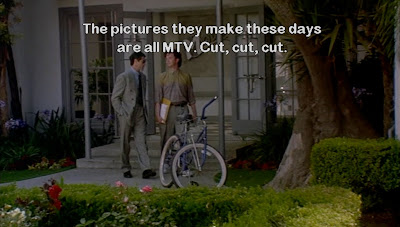 Altman is quick to introduce his classicist figure, a well-dressed man so enamored with the magic of Hitchcock and Welles and so disenchanted by the pitfalls of modern filmmaking practices that he becomes a caricature of regressive thinkers and a foil to the characters at the opposite end of the spectrum, the ignorant, productive studio execs who will do anything to make a quick buck from more and more product regardless of its artistic merit. These types of individuals, Altman suggests, are as much a part of the spiritual vacuum of Hollywood as the dumbfounded forward-thinkers, both stubborn in their refusal to gather a comprehensive understanding of film culture. Furthermore, the man's entire dialogue cleverly comments on Altman's own method; the anger towards MTV-style hyperactivity and the celebration of the virtuosic tendencies of Touch of Evil both mirror Altman's extended take. 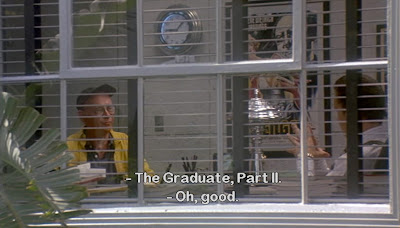 The shot alternates between frenetic movement outdoors to static peeks inside, capturing the hullabaloo of anticipation and activity surrounding the offices and the relative repose of the script pitches, where eager screenwriters spit out summaries of their spec screenplays to generally disinterested execs. A recurring tendency among the wannabes is to claim sweeping parallels with older successes, as if to imply that their ideas will offer as much commercial dependability. Funnily enough, the producers regularly seem to buy into it, failing, at least publicly, to acknowledge the vapidity of their claims. In a telling touch, Altman places classic film posters in the backgrounds of these shots as a reminder of the treasures of the past, seemingly ignored when juxtaposed against the mindless commercialization of the present (as portrayed in this film). 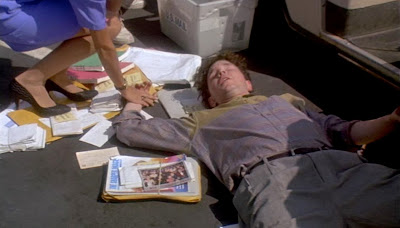 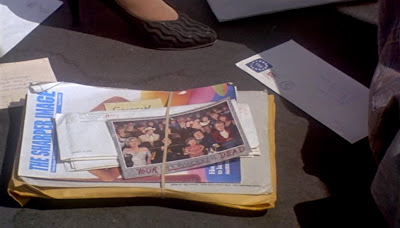 Altman zeroes in on a postcard dropped by the mailboy in a minor accident: "Your Hollywood is dead," it reads. Though these recurring cards prove to spring from a tangible source within the actual narrative, it's tempting to call them transmissions from outside of the film, that is to say, from Altman. 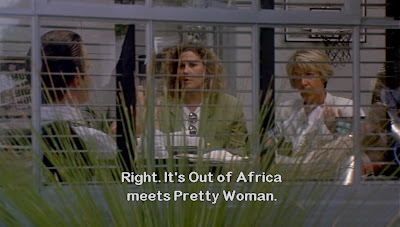 More evidence of the hapless linkage to previously profitable efforts - the perpetual recyclability of Hollywood. 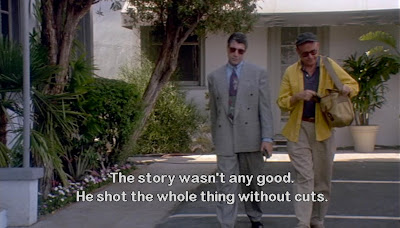 The suave classical Hollywood figure returns, but this time Altman's using his dialogue as a vehicle for his own veiled, wink-wink self-critique, as if he's acknowledging that up until this point The Player's "story [is]n't any good", like Hitchcock's Rope, but that it sure can offer technical spectacle. So while Altman is railing against the industry he must submit to, he's also turning the camera inward, suggesting that rather than being consumed by his own perceived genius, he's genuinely self-effacing. The film is just that throughout, a carefully modulated balance between a rigorous metafictional satire and the self-conscious realization of a thoughtful director stepping violently on his own turf. 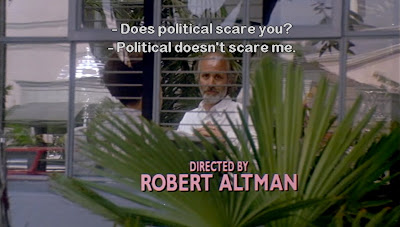 Do you (or anyone else) know where this was filmed? I've been forever trying to identify the studio. When I worked at Ren-Mar, several people said it was filmed there, but it clearly wasn't. I know it's also not Fox, Radford, or Universal. Warner doesn't have bungalows like that. Where is it?

Nevermind... it was Hollywood Center Studios, at the time probably still Zoetrope.