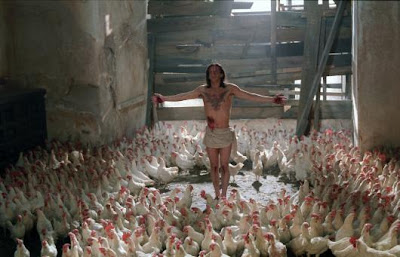 For all its admittedly surreal flourishes and bonkers left-turns, Santa Sangre is actually provocateur Alejandro Jodorowsky's least anarchic film (if we take his disowned The Rainbow Thief out of the picture), for within its hysterical madness there is a traceable, if lopsided, psychosexual transformation, a personal coming-of-age odyssey that makes just enough sense when placed within Freudian and Jungian tenets. Because of this, it's also his most satisfying and complete work, rarely falling victim to overlong displays of wild debauchery. His chaos-stuffed 1973 hit The Holy Mountain still remains my favorite, if only for the dazzling nature of its imagery, but as narrative, as (dare I say) drama, Santa Sangre delights and confounds in equal measure. This is not to suggest, of course, that the film is the least bit conventional in its wayward approach to storytelling. Rather, it strands itself from plausible reality at every turn, depicting the turbulent upbringing and post-traumatic complexes of Fenix (Adan and Axel Jodorowsky, the director's sons) - the son of a heinous ringmaster named Orgo (Guy Stockwell) and an overbearing sacrilegious fanatic/trapeze performer named Goncha (Blanca Guerra) - with elliptical verve and inscrutable diversions.

Starting with an image of a barbaric grown-up Fenix hidden away in an asylum, the film quickly and unexpectedly gestures backward to tell the story of the Circo del Gringo, the family's lurid circus that is essentially Fellini magnified and made extra grotesque. There Orgo, plump and drooling, flings knives at a woman (Thelma Tixou) covered head-to-toe with tattooes, a dangerous spectacle made erotic by the woman's histrionic expressions of sexual pleasure every time a soaring knife shimmies between her upper thighs or beside her lip. Meanwhile, Goncha struggles to maintain her Santa Sangre (translated as "Holy Blood") sanctuary, where her and a mass of supporters are convinced that the pool of red paint in the middle of the room is actually the blood of the cult's patron saint, a young girl whose arms were cut off by her two brothers before her death. Fenix is caught within an oppressive marital tension between Orgo and Goncha caused by Orgo's routine sexual finagling with the tattooed woman while also harboring feelings of romantic attraction to the tattooed woman's deaf-mute daughter Alma (Faviola Elenka Tapia), a circus performer whose physical ailments and genuinely human demeanor throughout make her the film's truly innocent sympathetic figure. But Fenix and Alma, in an affecting scene underscored by Jodorowsky's iconic compositions, are drawn apart indefinitely after Goncha, in a fit of rage, pours acid on the genitalia of the tattooed woman and Orgo, who responds by promptly cutting off her arms.

Santa Sangre's character conflicts operate in such a way throughout. Although the motivations behind the actions are more or less clear, the punishments enacted stretch any inkling of reason or verisimilitude. Certainly an acid attack is not the cleanliest or most reliable form of murder, and certainly Orgo's violent outbreak is a bit over-the-top in its execution, but Jodorowsky deliberately makes it so in order to align Goncha's traumas with that of her saint's, to give the film the fanatical religious and mystical thrust that all his film's incorporate and subsequently deconstruct. Furthermore, it's quite simply because Jodorowsky revels in the terrain of baroque overstatement; when his characters are angry, they get very angry, and the same goes for sensations of happiness, sexual excitement, and horror. All these elemental emotions are in feisty competition in Jodorowsky's work, making them rather turbulent experiences that are difficult to engage with emotionally. But Santa Sangre includes exalted occasions when the kaleidoscopic tone collage comes to a steady halt, leaving in its wake scenes of rich emotional poetry, such as the harrowing devastation of Goncha after her Church is bulldozed and Fenix comforts her, or the plaintive and inevitable farewell of Fenix and Alma, which feels like a missed opportunity until the two reunite later in an equally lovely scene of romantic swooning. For all his cinematic nihilism, Jodorowsky is unusually sensitive in his depiction of these perversely relatable scenes by visually matching the respective emotions, like when his camera swoops under and spins around Fenix and Alma during their uplifting kiss. 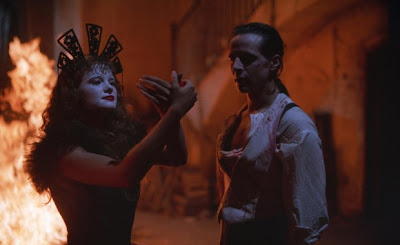 By the time Fenix is older, the raunchy traumas of circus life prove to have made an indelible mark on his psyche. Living in a nuthouse with mentally disabled, cocaine-snorting inmates and a guard who treats him like a child, Fenix is all of a sudden called upon by his mother in the alley adjacent to his cell. The subsequent shot of the two of them trotting wearily into a cloud of smoke at the end of the street is a succinct visualization of the foreboding experiences ahead for Fenix under the false promise of motherly support. Goncha enlists her son as her sidekick in a peculiar theatrical show in which he stands behind her and acts out the movements indicated by her words with his arms, which are squeezed through her costume to suggest one person. It grows increasingly disturbing when the goings-on at the theater start to mirror the circus, with Fenix, perhaps against his own conscious will, enacting on a voluptuous fellow performer his father's sexualized knife routine. The moment Goncha has any sneaking suspicion of her son being attracted to a woman (likely indebted to her husband's consistent infidelity), she begins living vicariously through him, ordering his hands to stab and murder the various females. Gorily, theater and life coexist, and in the process Fenix's oedipal complex is strengthened.

The film's batty final act is somewhat unbalanced in its trajectory (quite literally when Jodorowsky's camera starts careening from one dutch tilt to another in the climax), and it contains a few too many subplots from left field (Fenix's admiration of James Whale's 1933 film The Invisible Man is a particular head-scratcher), but it all coalesces into an awesomely zany fit of Gothic horror not unlike the work of Italian directors like Mario Bava and Dario Argento. Whether the presence of producer Claudio Argento (Dario's younger brother) rubbed off on him or whether Jodorowsky earnestly sees shocking horror as the natural conclusion of a man's motherly dependence is a curiosity better left ambiguous, because the finale's loopy, ugly, claustrophobic, and ultimately sublime beauty makes up for the rest of the film's often clumsy discursiveness. When the newly anointed grown-up versions of Fenix and Alma (Sabrina Dennison) wander outside the crime scene into police headlights and are forced to raise their hands to the sky, it's bracing and almost mysterious how effectively the metaphor of letting go of the past and regaining one's identity works. Santa Sangre is one big elaborate allegory for these themes, and it's a miracle that despite its seemingly outlandish countenance it has such conviction behind its sentiments.
Posted by Carson Lund at 10:27 AM