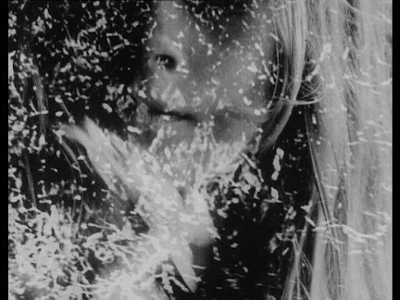 Gunvor Nelson's 10-minute short My Name is Oona is an often unfairly forgotten gem of experimental cinema, cloaked to some extent by the works of the bigger names of Nelson's time. Its relatively diminutive stature aside, it's an enormously moving visual and sonic poem about identity that manages to get at the simultaneous excitement and anxiety that comes with a knowledge of one's self. Nelson obliquely posits this knowledge in the film as the sensation of gradually coming to consciousness or waking up, capturing in a stirring succession of incomplete, fragmented images her young daughter Oona's realization of her name and her physical world. Her radiant face is subjected to intense scrutiny, pausing in front of the camera to stare into the lens or glimpsed in candid moments of play, grinning hugely. Equal time is spent reveling in the natural landscape around her, such as the silvery bushes that swoop by a tracking camera or the sun-blasted field where Oona rides her horse. The visual information is delivered only in snatches, interrupted by cuts to black or swiftly excised just before the viewer has a full spatial grasp. This naturally creates an impression of ephemerality, which is representative of both the relationship between Nelson's camera and Nelson's daughter and the fleeting nature of childhood itself.

My Name is Oona is anything but an idealized, utopian vision of childhood and identity. Nelson suggests that these notions are ever-shifting from tenderness to profound apprehension, and the film's rhythm consciously triggers these emotional fluctuations. It does so, of course, through its visuals (stalling momentarily for lovely slow-motion before bursting into kinetic movement) but even more largely through its hypnotic soundtrack, by Steve Reich. Reich works with the raw material of Oona's own voice as she repetitively recites "My Name is Oona." What starts by sounding like an elementary school speech exercise gradually coalesces into a pulsing vocal drone, with Reich overlapping and warping Oona's voice to the point that it takes on a purely musical, rather than verbal, function. After the first climax of sound fades out, the film luxuriates in a minute or two of peaceful stasis while Oona intimately reads out loud the days of the week. Then Reich begins building up another cacophony of competing voices, this time incorporating an even more unsettling, robotic version of "My Name is Oona" that discordantly scrapes against the surrounding cadence, paradoxically accompanying what are likely the film's most liberating images, the silhouette of Oona and her horse galloping through the wind. The competition between these forces is intensely effective, communicating both a fond familiarity with Oona as well as a visceral discomfort. Because the film is more impactful than most feature-length works, and because few artists can demonstrate such an inseparable pairing of sound and image, My Name is Oona is a landmark in poetic cinema.
Posted by Carson Lund at 6:41 PM