How many shots of scraggly Viking warriors sitting on a hill, staring out into nothingness, and occasionally muttering portentous pseudo-Biblical lingo can one fit in a film before it becomes absurd? Nicholas Winding Refn was up to this challenge with Valhalla Rising, his latest film about a cyclopic slave-warrior appropriately named One-Eye (Mads Mikkelsen) who slaughters and escapes his Pagan captors to incidentally find himself connected to a group of brooding Catholic Norsemen who are emphatically searching for the Holy Land in 1000 A.D. Unfortunately, Refn's redundant "tone poem" does tip over into the absurd at times, and it's more mind-numbing than it is hypnotic, but it's tough to fault him for trying; as the film laboriously plodded along with enough Tarkovsky intoxication to sink a ship yet still miraculously itself, I began to wonder if I'd ever seen anything quite like it. Of course, I've witnessed savage Vikings beating skulls before (though sadly it remains for the most part a scarcity onscreen), and the general narrative outline and geographical trajectory of the film is suspiciously congruent with Joseph Conrad's radical anti-imperialist novel "Heart of Darkness" (not to mention having an overall air of mythical timelessness about it that suggests the story has been told in various iterations at least a million times), but something about Refn's strange presentation - his indulgence in gloom and doom or his frequently numb efforts with staging - makes it distinctive. This is closer to Andrzej Zulawski's hallucinogenic, unsettling oddity On the Silver Globe than any of the more common comparisons that have sprang up like Stalker or Aguirre, Wrath of God.

The trouble begins early when Refn titles the first chapter of the film "Wrath", immediately lending it the heavy sense of self-importance that often plagued Lars Von Trier's similarly subdivided gorefest Antichrist last year. What's more, the simple narrative strategy of chaptering proves to be an unnecessary and curious move on Refn's part in the grand scheme of things provided how tonally repetitive each section is and how much imagery feels like it's literally spliced around in different spots. We begin with One-Eye as a caged prisoner to the Chieftain, where he is routinely used for brutal battle games in which he finds himself chained to a stake in the ground fighting for his life. Though there's a perverse thrill in it for the blank Pagan warriors sitting on the sidelines, Refn's roving camera makes it a certainty to highlight the sheer displeasure of this lifestyle, the way the violence is strictly an end rather than a means to anything. This idea extends to the remainder of the "battle" scenes in the film, which for all intents and purposes are bereft of drama. Only elemental motivations - honor, rage, personal safety - guide these brief snippets of bloody violence, and they're meant to simply exist as facts of life, inevitable repercussions of the milieu. Like in ancient Scandinavian prose, Refn's violence is swift, matter-of-fact, and all in a day's work.

If these Vikings are wonderfully adroit fighters, they remain concise and clumsy with their words, and Refn's ponderous dialogue doesn't help. Granted, Valhalla Rising embraces a laudable level of historical realism, a preference for not sensationalizing the bare-bones lifestyles of these straightforward men, so it's only natural and rather wise that Refn eschews a traditional narrative arch in favor of a series of elliptical sequences and dialogue. However, somewhere along the way he mistakes dangerous levels of humorlessness and stoicism for authenticity, and the result is a smattering of wooden line-readings like "it was never for him, but his time is coming" that just sit like dead ducks without any surrounding context. Also, whether it's just Refn's bizarre inclination towards awkwardly up-front voices or the result of a hack sound mixer, Valhalla Rising must be one of the most sonically ragged films I've seen in a while, with disjointed hissing piercing through the vocal threshold time and time again and pounding, suggestive prog-metal building tension with no suitable visual counterpart. This all generates a serious divorce between image and sound that can be both irritating (when Refn refuses to pay off the anxiety he so willfully builds aurally) and strangely compelling, the idea of these two fundamental ingredients of cinema being as remote from each other as the alienated characters in the film. 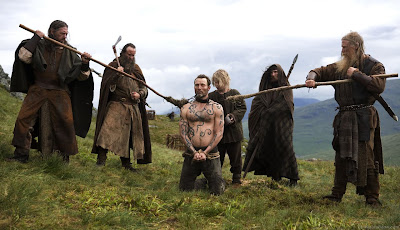 Without a doubt though, where Refn's film indisputably succeeds is in Morten Søborg's darkly beautiful cinematography. The dirt, the fog, the threatening black clouds, the robust wrinkles on the faces of these weathered men, are all rendered with a stunning palpability via a sickly desaturated color palette. It's no surprise that the film is at its best when it is plainly luxuriating in images, eschewing character development for grim panoramas of both landscapes and faces. However, with such a barrage of photographic ruthlessness, perhaps it was an inevitability that it would overstay its welcome, becoming rather tiresome and redundant after about an hour. As if anticipating this, Refn supplies One-Eye's journey with an unexpected arrival in a refreshingly greener North American nowhere after the ship he was sailing on falls drastically off course in the midst of a thick fog. There he witnesses firsthand the overbearing religious frenzy of the Christians, who find themselves torn apart, often literally, when a few members don't hold the carrying out of Christ's sacrifices as highly as others.

The finale of the film, when the icy, vacuous anti-hero sacrifices his life in the face of a vast tribe of armed Indians for the survival of the young Danish boy who feeds him and stays at his side throughout, might suggest One-Eye as a worn-out reincarnation of Christ, giving the film a closing note of religious ambiguity as his disembodied face sits ghostly over the hellish landscape. Not only does One-Eye harbor this rare feat of astonishing humility, he also possesses the ability to portend strings of future events, which play throughout the film cloaked in a tacky red filter. But Refn's main character is an even stronger parallel to Odin in Norse mythology, the one-eyed God of War who ascends through a brutal environment to the climactic capital of Valhalla, where creatures feast, fight, and engage in all other acts of instinctual slumber. Whatever the allegory though, it's tenuous and murky at best, and Refn never seems entirely convinced of its necessity to the story. He simply jabs in several directions, prioritizing the visceral impact of the imagery and the violence over any meaning it might all have. Ultimately, Valhalla Rising, albeit messy and fierce in an intriguing way, is such a farcically self-serious production that it gets in the way of any authentic, complex statement on the culture and lifestyle of ancient Scandinavian warriors.
Posted by Carson Lund at 11:56 AM

The certain thing is that it was waiting for more of this movie of what ends up by offering. It remembered me to Van Diemmens Land, for the landscapes and the slow pace; though I liked the latter much more.
The Zulawsky's movie that appointments it is one of my weaknesses and does not do very much I outlined it in my blog.
A greeting from Spain