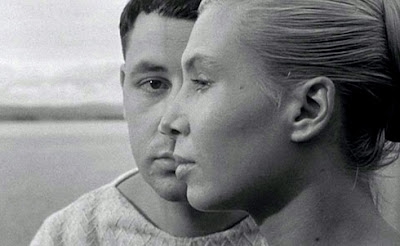 With little money, little experience, and little knowledge of the cinema, Agnes Varda made her peculiar debut film La Pointe Courte. The result is one of cinema's oddest and most quietly groundbreaking inaugural works, an atypical, amorphous salute to the titular fishing village in France, a specific locale within Sète, the neighborhood of a portion of Varda's youth. Haphazardly perched in an ambiguous middle ground within documentary and fiction - and occasionally making strong, definitive stabs at both - the film vacillates between a quasi-Bressonian study of a dissolving marriage and a nondescript portrait of the various comings-and-goings of the townies. Neither section makes a case for being the driving force of the film, but rather, they interject back and forth with graceful chaos. Coming from a young woman with no grasp on cinematic vocabulary (at least from an academic standpoint, for she definitely has intuition), it's understandable hearing that Varda claimed to pull structural inspiration from William Faulkner’s The Wild Palms, an adventurous novel that swapped, chapter by chapter, between two disparate narratives.

Here, Varda takes Faulkner's conceit further, transposing his quintessentially literary form to the mutant canvas of film with two strands that are both arguably non-narrative. First, there is her almost ethnographic documentation of the lives and travails of the local fisherman and their families, all of whom are portrayed by real inhabitants of La Pointe Courte but who often times "perform" for Varda rudimentary mini-narratives. After a credit sequence in which Varda's camera is poised on the interior of a log, a gentle wind seems to blow it upstream and into the back streets of the village, incidentally settling into this initial mode. Secondly, there is the boldly distinct story of Lui and Elle, played by relatively established theater actors Philippe Noiret and Silvia Monfort, in which the two middle-aged lovers visit Lui's old hometown (La Pointe Courte) and feverishly contemplate the state of their relationship, wondering if any life remains in it. Their roles are simplistically archetypal - the meditative country boy and the erratic city girl - and Varda's treatment of them is deliberately droll and lifeless. They speak their lines with no inflection, and the film's post-synchronized sound makes no attempt to give them spatial coherence, as if pinning them down to their self-contained, artificial universe. It's almost as if Varda is decidedly unsympathetic towards them, suggesting that it is the townspeople, not the transient others, who are to be paid utmost respect.

This idea extends to the particular way Varda shoots both sections. The episodes with Lui and Elle have a cryptic stylization to them: baroque compositions, scrupulous blocking, and often exacting camera movements. It's the kind of visual style that would suit psychological analysis, but it is complicated by how much Noiret and Monfort are stripped of emotion, given very little evidence of external character depth. Their dialogue has the kind of meandering, poetic tremor to it that would never exist in real-life conversation. On the contrary, the stories of the fishermen - the group who are interrogated by the fish inspectors, the paunchy, raunchy mother whose children nearly overflow her concrete dining room, the daughter of a disapproving fishermen who falls for her father's younger co-worker - are shot in a direct, neorealist manner, denied the more elegant lighting that embellishes the married couple to achieve a rougher, sometimes sunburnt look. Yet these episodes are also punctuated by some surprisingly majestic tracking shots that have an almost Tarkovskian beauty to them; the camera will float through the village, sliding in and out of open houses and glimpsing windy clothing lines on the way. Hints of Varda's striking formalism, progressively more evident as her career went on, is on display here entangled with a quite paradoxical vérité look. 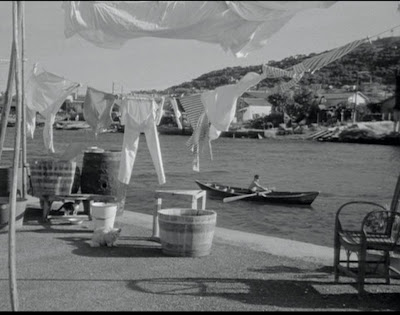 What's particularly fascinating about La Pointe Courte is the way that so much of it feels offhand and improvisational despite Varda's own insistence that the film was carefully and minutely pre-planned on a shot-to-shot basis. Besides the novelistic blueprint that vaguely guides the proceedings, there seems to be very little internal logic. The notions of when exactly to traverse the line between documentary and fiction, when to cut, and what to cut to and why are obscured deeply. Thus the editing, surprisingly courtesy of Alain Resnais, who Varda asked on a whim, borders on the anarchic. One such cut electrifies the screen with a hand swiftly slapping a boy's face, an unusually brief shot whose function is similar to that of Orson Welles' audience-awakening superimposed chicken in Citizen Kane, restocking the film with life after a longer, quieter episode. Moreover, much of the documentary-like sequences contain very detailed, off-the-cuff shots, like the close-up of a young child's feet before she jumps from a long piece of wood into the water, an image that communicates an aura of the decisive moment, a candid glimpse that supposedly delighted Varda as she conducted the scene. But when one realizes these were all given prior thought, it speaks to Varda's unique cinematic instinct, her ability to capture the ephemeral.

Given how seemingly uneducated in film culture Varda was in the early 1950's when she began work on La Pointe Courte, it's amazing how much the film manages to portend many subsequent cinematic benchmarks. Various sequences with the central couple manage to uncannily predate some of the iconic imagery from classic Bergman films, albeit in much rougher, more abbreviated iterations: the married couple's faces squashed together against a flat landscape to become one (Persona (1966)), the scene in the bottom of an abandoned row boat (Through a Glass Darkly (1961)). And of course, there is a whole school of thought that likes to consider La Pointe Courte as a spiritual predecessor to the French New Wave, the kind of unconventional, personal vision that encouraged filmmakers like Godard and Truffaut to take their own courses off the beaten path. It's certainly a bracing, daring film (so daring in fact that it sometimes threatens to stretch the attention span to a level of alienation), one that effectively communicates the essence of this small, closed-off fishing village.
Posted by Carson Lund at 7:37 PM