Rashomon (1950) A Film by Akira Kurosawa 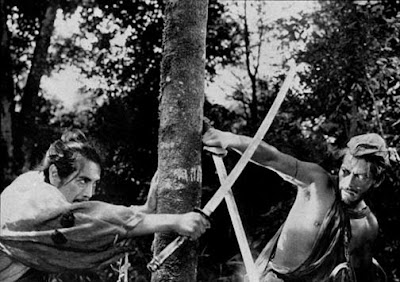 When films become canonized - that is to say, they are raised to a mythic level that is considered irreproachable - serious criticism has the unfortunate tendency to fall by the wayside. The quintessential example is Citizen Kane, a film whose overwhelmingly positive critical consensus has made viewers feel worthless if they do anything but surrender to its majesty. The notion is that if the film is so widely considered "great", then it must be great. Any swimming against the current would, in this instance, look baffling, unintelligent, and uninformed. Yet it is normally the thumbs-up reactions which have become lazy, dispassionate, and streamlined in such instances, safe in the worst possible way because of how they undemonstratively continue a long line of recycled praise. Suffice to say, Akira Kurosawa's revolutionary, game-changing Rashomon is a film that, for me, fits perfectly into this category in that it is almost unanimously regarded as a timeless masterwork despite what I consider to be a wealth of clumsy, unappealing flaws. At the risk of deterring people from the film though, which nearly singlehandedly exposed Western audiences to the great diversity of Japanese cinema, I will keep my pronouncements gentle: Rashomon is far more interesting to learn about and to know the significance of than it is to actually see.

One of the major elements that critics and historians point to as a sign of distinctive genius is the fact that Kurosawa sanctions the idea of absolute truth being elusive and utterly indefinable. Visual or verbal information should no longer be responded to without a hint of skepticism, he implies, for there is no real authoritative truth-teller. This is clearly a weighty, respectable theme, so daring in fact that if not handled properly it could easily be a self-defeating mechanism with the potential of being boiled down to one reductive "well, why should I believe your film then?" Kurosawa orchestrates it in such a way that it does indeed work to sidestep this catch-22, but his method is so clinical, so desperately banal and specific, that it does so without making the film anything more than a monotonous riff on a thesis statement. A murder and a rape occur in the woods, and three suspects recount their experience of what exactly happened. These descriptions are told visually in flashbacks with painstaking detail. Adding another layer of falsification is the fact that these testimonies are being filtered through a woodcutter (Takashi Shimura) who witnessed them from the sidelines and who is explaining these stories somberly to a commoner (Kichijirô Ueda) and a priest (Minoru Chiaki) underneath a decrepit gatehouse in the torrential rain called Rashomon.

Inevitably, in order for Kurosawa to push his point, each flashback bears little similarity. In fact, in most cases the recollections tend to contradict the others. The only thing the bandit Tajômaru (Toshirô Mifune), the murdered samurai (Masayuki Mori, whose presence exists through the use of a medium that speaks in distant, ghostly tones), and his wife (Machiko Kyô) agree upon is that the violence ensued in a grove in the woods. Whether they are tweaking their stories in the interest of saving their own backs or if it is actually how they perceived the incident is left unclear. Perception itself is untruthful however, as Michelangelo Antonioni's Blow-Up (1966) proved brilliantly 16 years later, so it becomes blindingly clear early on what Kurosawa is getting at: objective truth does not exist in this world, and it is only through forceful, authoritarian, and often unfair final judgments that we can negotiate "right" and "wrong". Rashomon attempts to build toward this implication from the get-go, but it doesn't realize that it said all it needed to with its opening and closing sequences, which depict the priest, commoner, and woodcutter arguing about what appears to be a dissertation they are planning on writing about the complexities of human nature. This renders all of the melodramatic flashbacks redundant and inconsequential, reducible as they are to hammy displays of male bravado, confused marital loyalty, and long, goofy sword fights that feel cheaply improvised when placed aside Kurosawa's more vivacious mise-en-scene in Seven Samurai (1954).

The most screamingly salient aspect I find troubling in Rashomon is its chosen mode of acting. To think that Toshirô Mifune's performance has been praised among the greatest in motion picture history baffles me, for I find his on-screen persona comes down to a fit of histrionic giggles, flailing body movement, and village idiot stereotypes. Maybe it's just the contemporary critical preference for subtlety that guides my judgment, but whatever the case I do not find the theatrical, overemotional acting particularly moving. Even worse, I don't think it suits the story and its thematic underpinnings very well. If Kurosawa and Shinobu Hashimoto's script suggests a study of the vagaries of human nature, the cast's unconvincing acting wipes out any semblance of verisimilitude, negating the possibility for a life-like reflection. Though Kurosawa has openly professed his admiration for classical Japanese theater acting and the expressive body language of silent cinema, his employment of these methods feels ill-suited to such delicate, ambiguous themes that would surely be better complimented by naturalistic performances. The final straw is the film's run-of-the-mill cinematography, which saves its only striking image for the closing frame. And I don't find Kurosawa's incidental pointing of the camera into the sun to be much to applaud, no less an act of genius.
Posted by Carson Lund at 4:53 PM

Your blog seems strangely bereft of comments, given the strength of the writing that I have witnessed, which is a shame. It may have something to do with the last comment I attempted to post being eaten, but I can't be sure. In the hopes of this one going through, I'll be reading in the future and hopefully will draw in some others - unless you suffer some sort of mental breakdown and your writing transforms into some stream of unconscious psychotic ramblings, at which point I will easily be able to draw in a bevy of new readers. Whatever the case, I appreciate the efforts.

Thanks a lot, Leaves. It's unusual that your comment would be "eaten"; no one else has ever informed me of that problem. I would definitely appreciate it if you could bring in more readers!