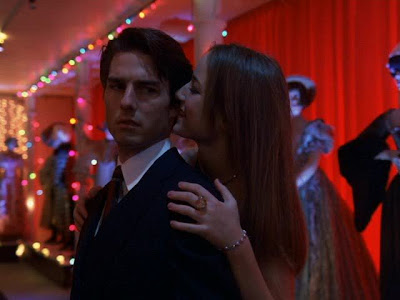 Stanley Kubrick was never known as a particularly erotic filmmaker, instead devising calculated avant-garde epics that either criticized the objectification of sex (A Clockwork Orange), presented it as an awkward off-screen effrontery (Lolita), or left it out of the picture altogether (2001: A Space Odyssey). It's interesting then in a cleverly ironic way that his final film at least purports to be a humid erotic thriller replete with the kind of glowing, screen-filling flesh that its posters advertised, flushing out the entangled bosoms of its two stars - and at the time, Hollywood's most vogue couple - Tom Cruise and Nicole Kidman. Certainly this appeared to be unfamiliar terrain for Kubrick, but once filtered through his typically florid, studied sensibility, it became clear that Eyes Wide Shut was no simple treat for the senses but rather a challenging examination of the ontological role of sex in society, how it's less an ephemeral act of pleasure than a significant dislocation of one's own permanent values, an inexplicably powerful instinct capable of destroying one's future. Kidman's character, Alice Harford, makes this explicit early on when after smoking marijuana in bed with her husband Bill (Cruise), she divulges a brutally honest tale of deflected sexual desire about a time when a naval officer caught her eye and she was willing to give up everything if he offered himself to her. Being the naive, self-assured doctor he is, this kick-starts a mysterious expedition into Bill's subconscious that exposes boundless layers of sexual opportunity and clandestine activity.

Markers of monotonous marriage and infidelity abound right from the first twenty minutes. Bill and Alice are putting the finishing touches on their preparations to go to an upper-class party at the Ziegler's. They exchange only glances and insincere small talk while finalizing their attire, acquainting their daughter Helena (Madison Eginton) with the babysitter, and strolling through the opulent corridors of their Manhattan flat, all while "Waltz 2" from Shostakovich's "Suite for Variety Stage Orchestra" floats through the soundtrack, establishing the familiar majesty that is usually lent to Kubrick's openings. Once at the party, the two drift apart seemingly as soon as they walk through the door, and only a few moments pass before Alice is slow-dancing with an ultra-suave Hungarian man and Bill is linking arms with two giddy Manhattanites. Both of them are utterly consumed by their sophisticated milieu, presenting themselves as people who have been to far too many fancy parties and have perfected their hopelessly cheesy formalities. Regardless, their demeanor works in context, which helps to firmly erect the film's reality as one of superficiality, routine, and social restlessness, as if knowing people and refreshing your acquaintances is the be-all and end-all of life.

There are more treacherous, introspective dimensions though, as Bill discovers through Alice's shocking revelation, which amounts to a total shattering of his shallow presuppositions about marriage, faith, and fidelity. Alice, on the other hand, appears more sexually mature, promiscuous even, as she confidently battles Bill verbally about the desire she assumes he harbors while treating female patients, and eventually almost boasts about her own sexual fantasies as a way of positing the equal magnitude of sex in a female mindset. This lengthy scene of dialogue in the couple's bedroom, rich with suggestive red and blue lighting, works to singlehandedly position the marital dynamic as a constant war with natural impulses that have a tendency to undermine love, and is one piece of evidence towards Kubrick's cynical humanism; if he is wary about man's inherent drives, it does not come with a favoring of one gender over another. Both, in fact, are evenly guilty. It is only through Bill's perspective that we witness this issue. Torn by his wife's declaration, he takes to the streets, variably projecting her imagined excursion with the naval officer in his head in dreamy blue-tinted monochrome with jerky movement, recalling early spectacle-based silent cinema. If his home is a place where the blunt frigidity of reality manifests itself, the willfully artificial New York nightlife is a playground for his sexually charged subconscious, and his car-rides in between the two poles is a twilight zone that Kubrick exploits with slow zooms and conspicuously rendered back projection. 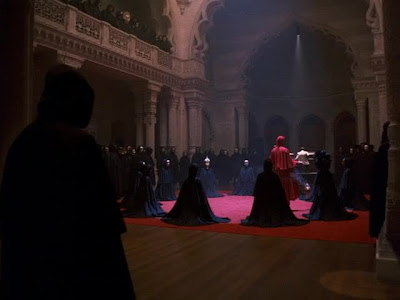 His first departure from home is the result of the sudden death of one of his patients, and in a time of consolation and grieving, the elderly patient's middle-aged daughter makes an unexpected bound at Bill, kissing him and telling him she loves him. Many have read Eyes Wide Shut as a dark comedy about Bill's sexual inadequacy, and while this scene is most importantly the first indication of the pervasive dread to come, it also contains a strain of pitch black comedy that culminates with Bill's matter-of-fact delivery of the line "We barely know each other. I don't think we've had a single conversation about anything except your father." Upon leaving, Bill falls prey to a horde of drunken frat boys who mock his sleek attire by calling him a homosexual. Shortly after, he is approached by a fur-clad high-class prostitute named Domino (Vinessa Shaw) who ushers him into her conveniently nearby apartment. Bill puts on his best raunchy bachelor impression, agrees to an exuberant price, and is prepared to get in bed with her when suddenly Alice calls from home wondering why the sympathy process is taking so long. The troubling choice is before him - sex or love - and he declines the offer from Domino, foreshadowing Alice and Bill's later decision to overcome their sexual mistakes and realize the true meaning of their marriage, which is really the ultimate point for the regularly misinterpreted Kubrick, who is so often identified as an aloof misogynist.

Bill's adventure grows ever longer and more convoluted, as if his subconscious is playing tricks on him, involving him in elaborate ruses to test the limits of his loyalty. This reaches its apex when he eventually finds himself with a puzzle laid out before him by a friend and pianist, Nick Nightingale (Todd Field), whom he goes to see at a late night show in a jazz bar. At this point, the film's rigorously mounted dreamscape has flown into overdrive, explaining why Bill can ask for a beer without specifying which kind or witness a duo of diminutive Asian men dressed only in underwear hiding in the shadows with a pubescent girl (a darkly comic, "wtf" moment that recalls the glance of the man in the bear mask in The Shining). Nightingale explains how this is only his first show of the night, even at such a late hour, and that he's actually going to an ill-defined cult gathering later on in a mansion in the woods where he has been asked play blindfolded. The vague mystery behind his wary description causes Bill's desire level to soar, and in the end he finds himself with the password "Fidelio" written on a napkin and an instruction to purchase a Venetian mask and cloak. What results is one of the most memorable sequences in Kubrick's career, a sustained, haunting tour of a huge masked orgy complete with bizarre ritualistic acts. A reversed, slowed-down operatic movement bellows on the soundtrack throughout, creating a droning ourobouric loop that seems to put everyone in a somnambulistic trance. Nude woman stroll around in masks with their black-clad male counterparts, clearly deindividualizing, dehumanizing, and filtering them down to their fundamental capacity for sexuality. It's a chilling, uncomfortable, yet strangely stimulating episode that fearlessly confronts the deep objectification of the male gaze, coupled as it is with a foreboding sense of Bill's luck running out.

As with most of Kubrick's work, Eyes Wide Shut is a painstakingly coded film, steeped in symbolism, narrative deception, and aesthetic rhymes. I have hardly begun to crack the surface of its labyrinthine matrix of meaning, which involves anything from the repeated use of certain primary colors, the historically loaded term "Fidelio", several references to the rainbow (the women Bill flirts with offer to take him to "the other end of the rainbow" and the store where he buys his masks is called "Rainbow"), and a deliberately ambiguous plot thread about a prostitute who overdoses on heroin in the final act. Beyond any of Kubrick's sophisticated fun and games though is an utterly dazzling audiovisual experience, so immersive and assured in its pacing and design. The film takes place during the Christmas season, and surely Kubrick makes full, sardonic use of the season's charm, rarely shooting a frame that is not decorated by a gorgeous mosaic of vibrant Christmas lights. Yet the soundtrack tells an entirely different story, hinting at threatening, uncertain layers beneath the cheerful facade through a fusion of avant-garde classical works like György Ligeti's "Musica Ricercata", an unmistakably primitive piano cycle that takes the general conceit of the Jaws theme and boils it down to its most simplistic, discordant basics. Like everything else in Eyes Wide Shut, it's something deeply unexpected, jarring, and ultimately revealing.
Posted by Carson Lund at 9:46 AM

I didn't quite know what to make of Eyes Wide Shut when I first saw it, but of course this was because I was a Freshman in high school at the time (mind you, this was about six years after the film's release- and Kubrick's death!), and had only seen three other Kubrick films: 2001, Dr. Strangelove and The Shining. The basics, I guess you could say.

Today, the film is in my top five favorites of Kubrick's films. My order of preference would be: 1) 2001, 2) Barry Lyndon, 3) Eyes Wide Shut, 4) The Shining, and 5) Paths of Glory. As for Clockwork Orange, although I definitely like it a lot, it's far and away the Kube's most overrated (mostly because it's the most grossly celebrated among high school teenagers who don't even know who Kubrick is). But I need to revisit Full Metal Jacket someday. My response to it was the same as most other responses to it are ("Great first half, meddling second half"), but I suspect the film must go much deeper than that.

I continue to grapple with Eyes Wide Shut, though I've long since accepted it as one of Kubrick's finest. I think that its hypnotic nature, often identified as lulling and aimless by detractors, works against the audience even as it serves as the crux of the film's allure. Kubrick always kept his distance -- a big reason I respond so positively to Barry Lyndon is the hilarious extreme to which the director takes this aesthetic remove, to the point that he moves far ahead of the plot.

I never understood why detractors had problems with this film on the grounds of it being "slow", "deliberately paced", or "too artificial". It's clearly designed to be a dreamy non-reality of some sort, so any claims of Manhattan being unrealistic are simply foolish. Not to mention the fact that all cinema is artificial; Kubrick is just exploiting the artifice a bit more than usual here, but perhaps not more than anything else he's done.

I've come upon this notion elsewhere that Eyes Wide Shut
is to some people less distanced aesthetically, and therefore more "human". This is something I've never quite understood either. I think its formal rigor is equal to that of his monster hits like Clockwork Orange and The
Shining. To me, Eyes Wide Shut stands a bit behind these great works. He's always analytical, but for some reason it's considered a better thing if he's analyzing sex and marriage as opposed to more abstract ideas like the state of mankind or law and order.