Sawdust and Tinsel (Gycklarnas afton) A Film by Ingmar Bergman (1953) 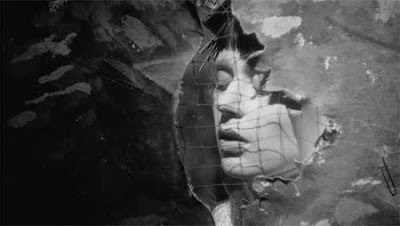 Ingmar Bergman's career prior to his international arthouse landmark The Seventh Seal is shrouded in mist and routinely neglected as inferior to later successes, a director merely refining his chops before fully realizing his capabilities. But Sawdust and Tinsel has actually been referred to by Bergman as his first good film, one with which he was finally able to express something personal. It's a ragged effort without the lofty aspirations that typify Bergman's finest films, and never quite reaches the kind of complex psychological tension that is his trademark, but it uncannily anticipates many of the technical and dramatic features that would show up consecutively throughout his sixty-year career. Released a year before La Strada, Bergman, like Fellini, centers his film around a group of traveling circus entertainers, many of which are reduced by the public to their fundamental shortcomings: there is the "idiot", Frost (Anders Ek), the "whore", Alma (Gudrun Brost), and The Dwarf (Kiki). This is lowbrow art, or "artifice" as it's defined at one point by the local theater director (Gunnar Björnstrand), in the truest sense, garish displays of physical buffoonery and odd feats that delight the lowest of townies, but Bergman is never condemning the group. Instead, Sawdust and Tinsel unveils the humanity in these people with an ever-watchful eye towards the unfairness they face, and, as in much of Bergman's work, attempts to blur the line between art and life.

It's of course necessary to acknowledge that for Bergman, to create a humane film is not to make something deeply compassionate and light; it's to be attentive to the humility that reveals these aspects, and it's bound to be a rather bleak outing. Work is not coming too easily for these carnies. The ringmaster, Albert Johansson (Åke Grönberg), is having regrets about abandoning his wife Agda (Annika Tretow) and his children for life on the road, for he is finding it difficult to make ends meet. At the same time, he is conflicted because of the fact that he cannot handle stasis. He considers his wife's life on a quiet street to be trifling and inactive, but when the troupe returns to Albert's hometown in need of new costumes from the town theater, he feels a desire to be in her company once again. Meanwhile, Albert's voluptuous mistress Anne, played by Bergman's wife of the time, Harriet Andersson, drifts towards infidelity herself, flirting temperamentally with the theater's androgynous Shakespearean actor, Frans (Hasse Ekman). When Frans essentially has sex with her against her will, an indecent act which is only suggested by Frans' bogus offer of a precious amulet after locking the doors, it triggers a threatening power play between Albert, Anne, and Frans, one that Albert is most passionately involved in.

Sawdust and Tinsel is one of the first times Bergman embraced the themes of shame and humiliation in a sexual context. Fear of disloyalty pervades the film, only augmented by Andersson's frank, domineering beauty, which is evident in the way she commands the ring during performances and the way she criticizes the theater's actresses for their flat chests. There is almost a masculine bravado to Anne's presence, even if most of her expressions tend towards inertia or anxiety, and it's as if the glimpse of underarm hair during her seductive talk with Frans is a conscious visual signifier of this. One can understand Albert's brute possessiveness towards her, and the fact that he is so enraged when after relentless questioning he discovers her informal tryst with Frans. Yet this scene also begins as a remorseless display of power, with Albert threatening Anne with violence, and ends as a pitiful showcase as he moans about the futility of life while perspiring profusely. After nearly taking the life of Frost, who spontaneously shows up in the trailer during Albert's most heated moment, he turns the gun haphazardly on himself, lamenting the "pity that people must live on this Earth", but quickly pulls it away in subservience. 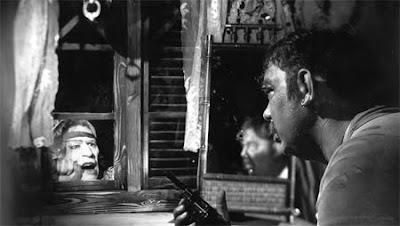 This startling act of near suicide seems to prefigure Albert's later decision to commit what amounts to a figurative suicide, a self-punishment of sorts. In a fit of histrionic emotion, he retreats to the cage of a grotesquely treated bear owned by Alma and shoots it, with Alma following behind him in tears. Murdering the bear means destroying something beastly and impotent, which is what Albert proves to be in the scene directly prior. At a circus performance, he is taunted by Frans who is seated in the front row of the ring while Anne circles on a horse. Frans shouts derogatory remarks that clearly reference the sexual encounter he had with her the previous evening, which riles up the crowd more than anything in the actual show. Bergman builds up an enticing editing rhythm that echoes the crescendo towards a shoot-out in a Western, alternating between increasingly tight close-ups of Albert's infuriated mug and Frans' jeering expression. Eventually there is a succession of shots focusing on one of Frans' eyes, all mascaraed up to emphasize one finishing touch of effeminacy. Albert finally reaches his boiling point and a duel is declared, in which Frans makes an absolute fool of him in front of his own audience, kicking him in the dirt until he is swinging in the air wildly, a defenseless bull that Frans simply laughs at. At this point, in order to redeem himself, Albert has nowhere to go but down, and Anne feels racked with guilt.

The film does not only build to a climactic moment of mortification though, for Bergman announces shame right from one of the earliest scenes of the film, the only overtly dreamy and expressionistic sequence in Sawdust and Tinsel. While the troupe rides their horse-drawn trailers through what appears to be murky late afternoon, the woman sitting in the front of the caravan recounts a story from the past to Albert about Frost experiencing his wife Alma bathing in the sea naked in front of an Army regiment. Shown in flashback, the scene is luridly overexposed, presaging a later dream sequence Bergman would shoot for Hour of the Wolf, and boasts an oddly unreal use of sound. Amplifying the soldiers' raucous laughter one moment and falling into complete silence the next, it acutely represents Frost's sudden humiliation in the face of his wife's lewdness. Aside from this one artful interjection, the film's visual style is primarily sedate, with a sprinkling of unique tracking shots that obscure space in the backstage of the theater. The most notable visual feature however is Bergman's frequent employment of a bifurcated frame with two floating heads, one in the foreground facing the camera and one in the background, something that he would later use to stunning effect in Persona. This technique manages to separate the two figures spatially and emotionally, and Sawdust and Tinsel is rife with emotional distance. Yet the final shot of the movie is not so hopeless, suggesting that the show, and by extension life, must go on regardless of the troubles that are faced.
Posted by Carson Lund at 12:29 PM

That was a nice review, although I wouldn't say that Bergman felt Sawdust and Tinsel was his first good film. He usually said that about Summer Interlude (aka Illicit Interlude), made in 1950 and released in 1951. (And he's right in saying so because it really is a magnificent film.) And both Summer Interlude and the one before it, To Joy, are deeply personal, partly based on his own life.

Also, Sawdust and Tinsel isn't the first time he "embraces the themes of shame and humiliation". Those themes are very much present already in his first film Crisis, and continues to be so in the 40s and onwards (and even before Crisis, since they're there already in his early theatre plays).

Fredrik, thanks for commenting. Your early Bergman knowledge certainly appears to exceed mine; I apologize if I made any errors. However, when I noted that Bergman called it his "first good film", that's actually a direct quote from the segment that introduces the film on the Criterion DVD. He says that he loves it for its "wildness". I don't personally find it to be his first great film; for me, that is Seventh Seal, but I admire the early signs of genius that Sawdust and Tinsel contains, albeit in a somewhat ragged form.

The only film I've seen before it is Crisis, so perhaps I shouldn't be making broader statements about his early work, but I'm more responding to a critical consensus that is general, not my own. You're correct to say his debut deals with humiliation, but not in such a forward manner as in Sawdust and Tinsel. I also was referring specifically to the sexual humiliation that is so omnipresent in the work. I can't comment too much on his theater work because of unfamiliarity.

Thanks for responding though. I always like to invite criticism of my own criticism.

Thanks for your reply. Yes, Bergman says a lot of things, and what he says should usually be taken with a pinch of salt.
And yes he has said that he really likes Sawdust and Tinsel but, on different occasions, he has also said that Summer Interlude was the first film he really felt happy about, a film that was really genuine. But he has also said that he felt that Prison (aka The Devil's Wanton, from 1949) was his first "own" film.

We don't have to debate the finer aspects of humiliation, although I think there's definitely an element of sexual humiliation in Crisis. Not to mention To Joy (based on his own marriage to Ellen Bergman). And Waiting Women (1952) also has its fair share of both shame and sexual humiliation.

I actually think Sawdust and Tinsel is his best feature film, with a tie between Summer Interlude and Fanny and Alexander in second place. But his best work is probably the TV-production In the Presence of a Clown, from 1997.

Interesting. It's nice to see an unconventional opinion of Bergman's oeuvre, someone who doesn't find Persona or Through a Glass Darkly or Wild Strawberries to be his best works. I've especially never heard anyone claim that one of his TV productions is among his greatest achievements. I guess I'll have to see In the Presence of a Clown. My current personal favorite of his is The Silence, but that's always subject to change. Out of curiosity, why do you find Sawdust and Tinsel to be his best feature?

And, as for Bergman himself, he can, like many great directors, be loopy with his words. I should have taken that into account.

Wild Strawberries was my first favourite, and it's definitely among his best, but I think that the combination of the circus setting, the acting, the dialogue and the great visuals in Sawdust and Tinsel puts in a bit ahead of the others.

But Persona, Shame, The Passion of Anna, Through a Glass Darkly, The Silence and Winter Light are also great films.

Another great TV-production is The Last Gasp, as is Scenes From a Marriage.

I think you have a very ambitious blog. I like it.

Are you presently trying to find valid genuine YouTube Views? Leave behind your headaches, we can completely assist you to buy YouTube Views. buy real youtube subscribers