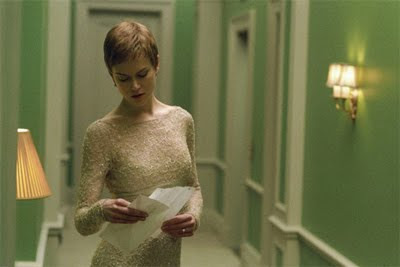 Jonathon Glazer's sophomore effort Birth boasts a central premise as silly on the surface as a Disney Channel comedy: Anna (Nicole Kidman), still grieving after her husband Sean died of a heart attack ten years prior, begins getting visits from a ten-year old boy claiming to be the reincarnated Sean, arriving prepared with copious information about their marriage. It's the kind of scenario that seems to invite skepticism, loaded as it is with innumerable potential comical situations. Glazer proves to be dead-serious though, riffing on the idea in ways that are convincingly metaphysical and deeply enigmatic. The result is a film whose individual moments, taken out of context, could very well feel laughable or tasteless, but come across exceedingly well in the grand scheme of things as the terrific cast embodies the roles of real earthbound adults, reacting to the circumstances with great verisimilitude. Anna is not a simply a lonely widow either; engaged to the sententious Joseph (Danny Huston) and surrounded by family and friends in New York City, it is clear that she cannot just deal with the dilemma on her own. And when little Sean (Cameron Bright) shows up at a dinner party in Anna’s Manhattan apartment and boldly demands that she not marry Joseph, a dilemma it is indeed.

The adults, including Anna, first react as if there is a clever little prank being played on them, but soon find Sean’s relentless methods of communication with Anna – letters, phone messages – to be a mild form of personal terrorism. He suggests that she meet him in the park, claiming she’ll know precisely where to go, and soon enough we find her walking down the same path that introduced the film in a protracted shot hovering over the adult Sean as he jogs through the snow-covered park. This opening sequence’s operatic tone – set to thumping, jovial, anachronistic music by Alexandre Desplat – is immediately contradicted by Anna’s somber meeting with the young Sean under the bridge where the adult Sean knelt down to die. To attempt to convince her, he offers to schedule a meeting with Anna’s brother-in-law Bob (Arliss Howard) for intimate questioning. The ensuing scene, a riveting cross-cut between the interrogation and the family sitting listening to the tape recording, is as revelatory as it is tense, forging unspoken rifts between Anna, her fiancé, her mother (Lauren Bacall), and her sister Laura (Alison Elliott).

One of the film’s major strengths is identifiable in this very moment and continues to intensify over the course of its duration, and that is its propensity to create significant dramatic tension through little more than an accumulation of nondescript glances emphasized by Glazer’s selectively probing camera. Broader scenes will occur while he simply focuses on one face, most memorably orchestrated in an extraordinary shot that zooms in slowly on Anna’s expression as she sits in a crowd at an opera. Kidman’s performance here is stellar, a showcase of subtle transformations in the eyes, cheekbones, and mouth; though a spectacle occurs around her, she is virtually disembodied from the immediate, instead deserted within her own thoughts. Desplat’s score once again complicates the drama onscreen, a bombastic orchestral swell that curiously manages to shape Anna’s introspection. Without saying much, we sense Kidman’s ultimate metamorphoses from disbelief to romantic longing, and equally silent is Huston, who also conveys a gradual change from modesty to jealousy so that his eventual violent outbreak towards Sean - bordering on maniacal child abuse - feels emotionally justified, albeit not fully expected. Part of this is a result of Glazer's storytelling tactic of showing something mysterious and only letting it be naturally explained later, such as in a lovely sequence where Anna's best friend Clara (Anne Heche) scurries into the night and buries an unidentified envelope while being followed unknowingly by the young Sean. Fleeting emotions bubble up and only gain credence as the film progresses. 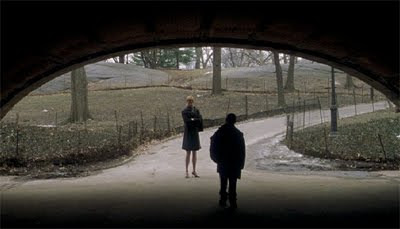 Birth operates with glacial formal poise, and it is through its exacting aesthetic that a Kubrick influence seems apt. Glazer works with the exemplary cinematographer Harris Savides to devise an austere yet elegant color palette bathed in shades of gray, brown, and green and filtered through high contrast. The film's world of dreamy New York nights and supernatural mysteries feels uncannily aligned with that of Eyes Wide Shut, not to mention that the presence of Kidman is enough to elicit strong echoes. Glazer's employment of the occasional slow zoom and an expressive musical element that feels like as much of a character as any of the film's humans further recalls Kubrick. Yet Birth lacks the gargantuan, otherwordly quality of Kubrick's later work, and generally appears to be shooting for something more pragmatic, at least on the level of character. The film functions within reality and is only infused by a sense of the metaphysical and sensual, which has more to do with the films of Krzysztof Kieslowski. Many have suggested that Kidman's performance is aloof and buttoned-up; on the contrary, I find it to be sensual in a remarkably subtle way, with her suave upper-class facade failing to cloak her desires during her more unrestricted displays of emotion. Furthermore, her short hair suggests a woman unguarded, primal. A controversial scene that takes place between her and the young Sean in a bathtub further substantiates this, as the staging of the scene within the bathtub feels like an attempt to announce a domestic womb.

A sudden third act twist regarding Clara and the mysterious envelope from earlier threatens to confuse the film's well-mounted themes, veering it uncomfortably towards an utter contradiction of what it was building to, but the final sequences manage to redeem it, culminating in a beautifully ambiguous final shot on the beach after Anna and Joseph's wedding (sounds like Shutter Island, huh?). Glazer's objective seems to be to probe the intricacies of love, to question whether or not it can be strong enough to transcend physical boundaries. By all accounts, Anna's consuming connection to the young Sean is socially unacceptable and morally questionable, but not necessarily spiritually misguided. After the audience learns that the adult Sean was unfaithful and the young Sean delivers the deliciously enigmatic line "I can't be Sean, because I love Anna", it calls into question whether or not the idea of a reincarnated Sean was ever actually physically manifested, or if it was just an elaborate symbolic ruse to allow Anna to find closure. Either way, the young boy's presence is an affirmation of Anna's ability to yearn for love even when its corporeal existence ceases, and in this sense, the gripping Birth is a significantly humanistic work.
Posted by Carson Lund at 9:07 AM

Great write-up. Obviously I'm a big fan. It's funny, I've rewatched Eyes Wide Shut, the Kubrick it's most often compared to, since I originally wrote on Birth, and the parallels you bring up make a lot of sense, but Eyes Wide Shut itself is the only thing he did that could be called humanistic, and certainly the least cold of the filmmaker's pictures. I'm not a big Kubrick guy, but it's one of his few films that I really, really admire, and still I totally forgot how emotionally complex it is.

And so, obviously, is Birth. You mention that the third act twist threatens to derail the film, and I agree, but I also think it's absolutely necessary. It's framed as the major plot revelation that clears everything up, but it only complicates further. Even the literal is ambiguous, and I think Glazer had to do that to emphasize how nothing is ever totally understood.

Doniphon, I wouldn't necessarily say that Eyes Wide Shut is any less "cold" than Kubrick's other films, though I hazard to use that word in the first place, because I think he is very sympathetic to the plight of people, if only somewhat pessimistic. Eyes Wide Shut is very much about the way that men must retreat to sexual fantasies to get through a troubling marriage, and the way that sex plays such an unavoidably integral role in all relationships, which doesn't sound too hopeful to me. I happen to be a huge Kubrick fan, which is partly why I liked Birth so much, at least aesthetically.

You're right about the twist ultimately producing more ambiguity in the film, which is the way I felt about Shutter Island. It's a complicated twist for sure, and it seems to suggest that the young Sean is the embodiment of the Sean that Anna wants to have had, before he became unfaithful. That's why Sean says "I'm not Sean, because I love Anna". I think he's saying that he's not the Sean Anna thinks he is, the one who was loving for ten years but was really hiding a dark secret.

The final shot of Sean with a voiceover accompaniment doesn't seem too believable either. Of course he wasn't just "imagining" things as the therapist suggested. There is definitely something more unusual going on. The idea of him entering Anna's life temporarily and then leaving makes me think of him as purely a metaphor for Anna coming to grips with her husband's death. Highly fascinating.

Kubrick is an incredibly complicated guy, and any blanket statement made about him (like I did) would almost necessarily fail to take into account his deep ambivalence. He can be sympathetic towards people, although I think Eyes Wide Shut's hope is in its ambiguity (I know, I use that word too much). The final conversation in the mall is absolutely integral, and quite beautiful; and I think the film as a whole (like The Shining, the other Kubrick I like) reveals the filmmaker's deep sensitivity towards the feelings of his female characters (if he hates man, it's as a gender rather than a species). But I really do think it's a warmer picture than his others; the acting is less stylized, he paints in less broad strokes, and it's sensual in a very disarming way, which is of course juxtaposed with the rather sinister story.

Good points on Birth. He's a Sean that never existed, which is the most disturbing thing about the whole movie. I would hesitate to call Sean a metaphor though. If he becomes a metaphor he becomes too abstract, too much like a narrative device, and it's essential that these characters are real people, so in questioning their identities we can come to question what it actually is to be, how we can identify ourselves, etc.

I understand your qualms with naming the boy a metaphor, because I do agree with you that Glazer is very focused on seeing his characters as real people. And certainly, the young Sean is a real ten year-old boy. I just think that the metamorphoses he suddenly makes to become a reincarnated Sean is rather abstract. Glazer intentionally has Bright play a joyless, almost robotic child, seemingly a nod to his symbolic quality. To me, it's as if Anna's intensified grieving caused by her engagement is projected vicariously onto this child named Sean, until she can re-experience love and understand the past is really gone. Notice then how he becomes a much more "normal" child in the final scenes, smiling and speaking logically, presumably the way he was for the years of life before he became "Sean".