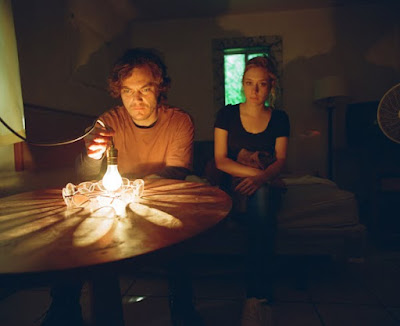 Of the two loosely connected films that comprise an unintentional diptych of the American law system, Werner Herzog's My Son, My Son, What Have Ye Done? is unquestionably the proverbial head-scratcher, a bizarre, inchoate collection of non-sequiturs resembling the more erratic projects of David Lynch, who serves as executive producer. The film was decades in the making for Herzog and fellow screenwriter Herbert Golder, who first concocted the script in the 1970's but were unable to find sufficient funding for the production until recently when Lynch showed an interest with his Absurda Productions. Based loosely on the true story of a grad student who killed his mother with a sword after become maniacally invested in his production of the Greek tragedy Electra, by Sophocles, in which he played the lead character Orestes whose actions he imitated, it is indicative of the kind of meta-textual tale Lynch would be sympathetic toward. I asked Herb Golder about the type of creative relationship that Herzog and Lynch shared during the making of the film, and although he insists that Lynch never once set foot on the set, I take his statement that the finished product is completely of Herzog's sensibility alone with a grain of salt. With distinctly Lynchian line delivery, a story whose blurring of reality and fiction is largely INLAND EMPIRE-esque, and the inscrutably random appearance of a midget (Verne Troyer), My Son often times feels like Herzog's sloppy thank you note to Lynch.

This is not to say however that Herzog's footprint is invisible, because after all, we're talking about a director who, above all others, can't help but kick around in the mud of his own work. The central character is a testament to this fact, another peg in a long line of "mad men" that Herzog likes to capture on screen, people who push themselves radically outside of society. Brad McCullum (Michael Shannon) is presumably in his late twenties or early thirties but still lives with his eccentric mother (Lynch regular Grace Zabriskie) in a San Diego suburb, much to the dismay of his curiously complicit fiancé (Chloë Sevigny). His life is superficially hygienic, with a ready-made dinner available for him every night and a home that is garnished by phony implications of the happy, good life - a bright pink exterior, waltzing flamingos, and an ostentatious garden. Yet this showiness is also slightly off-kilter and disturbing, hinting at the unsteady waters of Brad's own schizophrenic persona. The film's first scene is a crude variation on the Twin Peaks opening, with two happy-go-lucky detectives (Willem Dafoe and Michael Peña) cruising through town right before receiving a call about an unwieldy murder, and from here the film excavates the enigma that is Brad via flashbacks that are elicited by Detective Hank Havenhurst's interviews with Brad's theater director (Udo Kier) and Sevigny's character.

Beneath the guise of bizarreness, there is a standard police procedural, and Herzog seems to want this conventionality only to tweak it with the hypnotic quality of his performers. Despite the fact that Brad is the film's singular oddball, Shannon is very much the actor who seems to embrace the freest manner of performance with wacked-out lines that come entirely out of the blue ("Some people act a role, others play a part!"; "God is here! But I don't need him anymore!"). The seemingly sane citizens are by contrast purely artificial, stilted creations, incapable of focusing on anything outside the crime scene filling up the picturesque street. It is fitting then that the majority of the film's laughs are evoked by Brad, the strange figure who holes himself up in his home with two "hostages" and shouts outlandish orders at the police officials barricading the exterior. In a one-off comment on the somnambulance of the task force, Brad wanders right by Dafoe's investigator when the case is first cracked open, muttering something about his "Razzle Dazzle" coffee cup while Dafoe apathetically ignores him. This comic absurdism does not weigh into the story as much as it should though, for Herzog's exploration of the crazed mind at the center of My Son is for the most part sincere, and with its pseudo-mystical underpinnings, it is hugely unconvincing and leads nowhere.

One element that makes the film uniquely Herzogian is its impulsive globetrotting. For a while My Son appears to be locked in to one locale, but as flashbacks grow increasingly tenuous and inexplicable, we see Brad in the misty mountains and tumbling rivers of Peru and the destitute streets of China. In Peru, he is with a disparate pack of marijuana-smoking free-spirits previously unidentified within the present-day of the story who lounge around on tall rocks and stare at the passionate waters, as alive with elemental energy as the rapid fog in Heart of Glass. Here he is a lone rider, supposedly unaware of the presence of others around him as he speaks nonsensical spiritual babble. One of the film's best images occurs in Peru, which I sense is a lift from somewhere else in his oeuvre, with the camera tracking around Brad in the middle of imposing mountains as he stares into the lens, his voice repeating on the soundtrack: "why is the whole world staring at me?". The brief China segment shows up almost incidentally, giving rise to a documentary quality. Herzog's crude digital footage captures underprivileged men and women as Brad becomes one of them, perusing the crowd conspicuously. These episodes are basically inconsequential in the context of Brad's mental disillusionment, but they have something to do with his increasing interest in an ill-defined New Age Spiritualism that leads him to call himself Farouk and the Greek tragedy he is acting in.

Herzog is mostly screwing around in My Son, letting his thoughts manifest themselves on screen with no inhibition. It's problematic, because the story of Brad McCullum - a matricidal wack-job succumbing to the customs of an ordinary life yet also repelling against them wildly - is potentially intriguing. As it is, the film is awkward and unfocused, drifting around at such a rate that it tends to forget elements that should be essential to its core, such as the Greek tragedy propelling Brad's insanity, or the indifferent, corrupt police force that could have been put to great use. At Herzog's best, he can conjure up transcendent escapism, but his worst work (in which I think My Son must be included, although this is only from my peripheral perspective, having seen it once in a screening environment that was less than ideal) tends to feature a director who is under the impression that he can get by simply with the clout of his own spontaneous genius.
Posted by Carson Lund at 12:26 PM

looks beautiful. Missed out on both Herzog exploits of the year, must catch up!

Interesting, Carson. The part where you mention that Lynch's style doesn't exactly merge with Herzog's is disappointing. I was hoping this film was something like the Spielberg/Kubrick hybrid with A.I.. Guess not.

Unfortunately, My Son, My Son didn't play here in St. Louis, so I never got to check it out. In a way, I still really want to see it because of Michael Shannon. He's always been a familiar face to me (World Trade Center, Before the Devil Knows You're Dead, etc.), but after his performance in Mendes' underrated Revolutionary Road I made sure to remember his name. He has a smaller role in Bad Lieutenant, which I just plain loved. What'd you think of that film?

Apparently, Lynch didn't really have much of a creative role in the film. He was just the one who brought it to life through funding, says the film's screenwriter Herb Golder. This is actually a film that Herzog and Golder wrote a long time ago.

I too was hoping I was going to strike gold with it. Don't let my judgment stop you from seeing it though; chances are it was really a masterwork and I just couldn't detect it. In fact, I know that several critics and bloggers ranked it among their favorite of the year.

Michael Shannon's performance to me was just zany, nothing more. He did some great ad-libbing, but on the whole it was all over the place.

As for Bad Lieutenant, I know about it but didn't get the chance to see it, even though it had an extended run here in Boston.