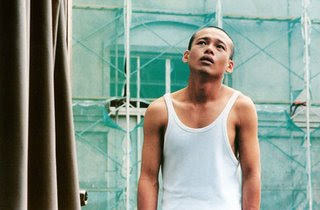 A small selection of obsessive filmmakers say that they make one film in their career, simply rehashing the same themes with imperceptibly slight changes. If there is a current director to whom this idea can be most aptly attributed to, it is Taiwan's Tsai Ming-Liang. His third feature, The River, is his first spot-on representation of his career-long concerns: existential solitude within the modern, urban consumerist environment, difficulty of communication, meaningless, merely physical sexual consumption, objective struggles as spiritual struggles. In 1997, when the film was released, it was Tsai's deepest, most complex, and most ambitious film to date. Today, a wealth of critics still consider to be his finest work, however I have trouble applying favoritism to any particular film of his considering they do contain such a string of similarities.

Tsai has cast Lee Kang-Sheng as the lead in every one of his films, and he also resorts to several other regulars including Miao Tien, Chen Shiang-chyi, and Lu Yi-Ching (save Tien, these figures are non-professional). For the most part, Kang-Sheng plays drifters either jobless or with a minor job, and usually develops some physical or emotional ailment. The two always inevitably overlap, as in The River, when he develops a severe neck pain following his spontaneous involvement in a film shoot, appearing as a corpse floating in the polluted Tanshui River in the film's opening scenes. Just as he is the source of contrived tragedy in the film that is being shot on the water by Ann Hui (in a special appearance as herself), Tsai plants his camera nearby the film within a film, asserting Kang-Sheng's character (Xiao-Kang) as the narrative catalyst as well. There is a taste of Kiarostami in this scene, a need to make the audience aware of the fact that it is indeed a film. Although Xiao-Kang was initially against the idea of appearing in Hui's film due to the dirtiness of the water, he takes up the offer and pays for it.

Shortly thereafter, Tsai casually begins observing the lives of a man (Tien), who spends ample time bumming around Taipei's gay saunas, and a woman (Yi-Ching), a bored elevator attendant. It is not until about thirty minutes into the film that we see the two and Xiao-Kang living in the same apartment, a triumvirate of lonely souls that hearkens back to Tsai's previous film, Vive L'Amour (1994). This time however, the focus is on a family which is not so much dysfunctional as they are nonfunctional. They barely speak, and if they try to it is in vain, such as when the father calls the mother (the only time he tries to communicate with her in the film) and only receives an answering machine. Nonetheless, the parents feel obligated to do what they can to cure Xiao-Kang; they try acupuncture, medicine, an herbal doctor, folk rituals, and a faith healer, none of which show promise. Meanwhile, there is incessant rain that is leaking into the father's bedroom, an issue he attempts to fix by capturing the water with a plastic sheet and channeling it into the apartment's drain system. When he and Xiao-Kang are out of town to visit the faith healer, Master Lui, this flooding problem becomes extreme, leaving the mother alone in the apartment with little means of solution.

The only escape for these characters comes unsatisfactorily through sex; the mother maintains a silent affair with a pornographic video dealer, the father shimmies through the dark hallways of the saunas, one in a mob of shirtless zombies peering into rooms in hopes of finding another pleading male, and Xiao-Kang encounters several affairs throughout the film made useless by his uncertain sexual identity, one of which involves his father, quite uncomfortably, in the lowly lit sauna. Feelings of confusion and dehumanization run throughout the film, and it is most stirring in the aforementioned scene, which is all the more nerve wracking because the dank lighting of the sauna obscures body parts, most adversely the head.

Tsai's visual style foreshadows his late works, which have reached the extremes of modernist minimalism. In the most complex scenes, the camera will remain fixed in its objective, detached position for minutes on end, acquiring an eerie realistic quality that builds tension until it is almost unbearable to watch. The River does however also contain a surprising amount of camera movement, an element that is entirely done away with in Goodbye Dragon Inn. The symbol of uncontrollable water appears here as the link between the family's several troubling agendas, and one can't help but see that, on a broader scale, it helps Tsai flow smoothly from one film to the next, carrying the same themes and images down the river.
Posted by Carson Lund at 8:28 AM