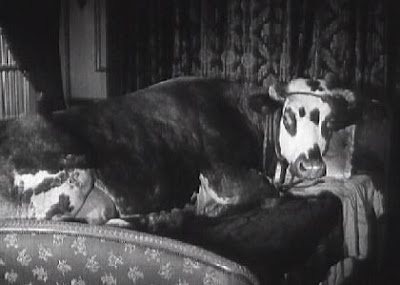 Age of Gold is an unparalleled early example of surrealist filmmaking, and indeed a landmark of cinema in general, in which Luis Buñuel cracked open his thematic toolbox in as over-the-top a manner as possible. An Andalusian Dog (Un Chien Andalou) - his previous collaboration with surrealist painter Salvador Dali - was technically his first film (albeit with a short running time at 16 minutes), but whereas that film favored the poetics of irrationality, Age of Gold follows a thin storyline and makes several anarchic statements that were wholly absent from the former. One can actually grasp at the several meanings apparent in any given image from the film and tie them together as one coherent, if broad, commentary, as was not the case in the general euphoria of Un Chien Andalou's images, which mainly arose out of Dali and Buñuel's dreams and contained only scant, inconsequential meanings. The film is essentially the first true Buñuel film, less a product of Dali's uncompromising imagination and more of Buñuel's own sensibility, indicated by Buñuel's declaration that Dali only imagined a very small portion of the scenes in Age of Gold.

The society that Buñuel is targeting with the film is metaphorically evoked in the opening scenes which demonstrate the lives of scorpions with an instructive voice-over. Scorpions are creatures that smugly refuse the company of others during solitude, devour creatures lower than them with nonchalance, and appear genuinely intimidating. High society in Buñuel's France does not stray far from these oppressive traits. The film's protagonist, a mustachioed man with a magnetic attraction towards the glistening daughter of a clergyman, is perpetually a victim of this society, caught first in a mud bath making love to her beside religious furor led by the Majorcans, a symbol of the dominating upper class (so dominating in fact that before this, a troupe of bandits fell defeated simply for deciding to approach and attack them). He also is dragged ruthlessly around urban France by two authorities, during which he imagines the woman's advertised fashion poses as desirous sexual behavior, until he finally slips free, booting a blind man in the chest while he's at it.

In doing so, Buñuel greets for the first time his distinguished theme of desire, although it is understandably portrayed most frankly here. Once the hero finds his way into the bourgeois gathering that makes up for nearly three quarters of the film, he at last meets back up with his lover only to find his erotic appetite not entirely satisfied; an obligation and the mounting pressure of the elite sitting nearby listening to a classical music performance force him to abandon his female (leaving her to her own devices sucking sensually on the toe of a garden statue) and explode in rage in an upper story room (firing inanimate objects out the window). The film concludes with perhaps its most controversial stretch: a demented staging of "120 Days of Sodom" which features a Christ-like figure surfacing from an orgy to the repetitive clamor of the drums of Calanda. Of course there are times when Buñuel's images simply emerge out of an interest in the absurd and shocking, for instance the appearance of a cow seated like a pet atop the object of desire's bed. Moreover, this gives the film its surrealist badge, and it works splendidly as a trip through the uninhibited subconscious. It's enough of an accomplishment that Buñuel had the audacity to kick down the door to what is socially, politically, and religiously acceptable and cause public outrage in response.
Posted by Carson Lund at 12:13 PM