The Commuter (2018) A Film by Jaume Collet-Serra 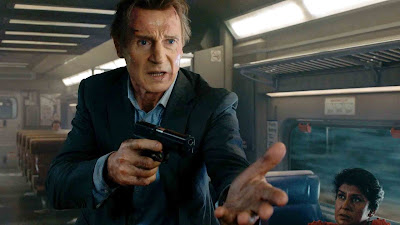 "For The Commuter, director Jaume Collet-Serra shrewdly casts longtime collaborator Liam Neeson, who recently announced (again) that he's retiring from action movies, as a middle-class man struggling through a sudden layoff. In what's surely no coincidence, the justification that Neeson cited for his retirement to reporters at last year's Toronto International Film Festival—'I'm sixty-fucking-five'—has found its way into The Commuter's dialogue almost verbatim. 'I'm 60 years of age,' pleads Michael MacCauley (Neeson) when given the axe by his boss at the Manhattan insurance firm where he's worked as a salesman for more than a decade, implying that he's not yet old enough to weather his remaining years without financial stability. Where the real Neeson appears to be resolute in his decision, MacCauley is a bundle of nerves as he's booted from the deceptive comfort of a high-rise office building to the grimy swarms of a New York gripped by recession-era anxiety."