The Voice of the Moon (1990) A Film by Federico Fellini 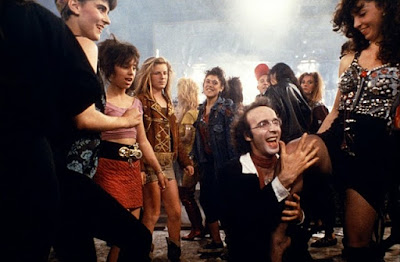 "Somewhere deep in the foggy Italian countryside, in an abandoned barn in the middle of the night, Michael Jackson's 'The Way You Make Me Feel' booms over a sound system for the dancing pleasure of a mob of leather-clad Gen X-ers. On the evidence of The Voice of the Moon, this was an aging Federico Fellini's vision of a world under the spell of globalized pop music and youth culture, where the new and the hip is a pervasive bug filling every crevice left by the old and the archaic. When this endearingly absurdist illusion manifests itself around the three-quarter mark of the film, however, it's a sense of euphoria, not cynicism, that prevails."

Full review of Fellini's swan song, now out on Blu-ray from Arrow Video, continues at Slant.
Posted by Carson Lund at 1:04 PM