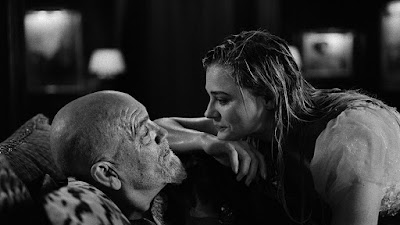 "Fittingly, the perennial question of whether art and artist can possibly be detached from one another looms heavily over I Love You, Daddy, which finds C.K. alter ego Glen Topher tormented by the sudden involvement of his teenage daughter, China (Chloë Grace Moretz), with an illustrious film director, Leslie Goodwin (John Malkovich), who also happens to be a rumored sexual predator—a simultaneously cerebral and ingratiating type who splits the difference between Woody Allen and Roman Polanski. A terrific Malkovich is fully at ease under a goatee and a sarong, investing every one of Leslie's highfalutin proclamations with a strange brew of sociopathic detachment and charitable curiosity. Slyly repelling any villainous narratives surrounding himself, Leslie is defined by an inscrutability that drives C.K.'s prosperous TV writer—and us—up the walls and fuels the film's anguished interrogation."

Full review of Louis C.K.'s new (and now not-to-be-released) film I Love You, Daddy is up at Slant Magazine. Note: I filed this piece shortly before a NY Times exposé was published outing C.K. as a sexual predator. I stand by my review, but there's certainly discomfort in having it out there, knowing that in some way pieces like this enable a Hollywood system that has historically supported men like C.K.
Posted by Carson Lund at 11:40 AM