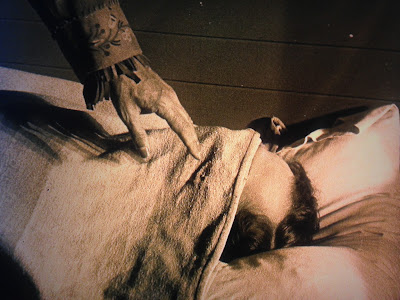 "Chronicling a journey through a man's conscience as much as across the heat-cracked landscape of the Gold Rush-era Southwest, Wagon Tracks is a stark morality tale that nonetheless garnered a Los Angeles Times decree as Hollywood's 'great desert screen epic.' The designation makes sense insofar as the rugged location photography, captured on the parched earth outside Los Angeles by early John Ford cinematographer Joseph H. August, offers a healthy spread of grandiose high-noon expanses and indelible campfire tableaux. That said, what most distinguishes this parable of manifest destiny is the compactness of its drama, which narrowly squares its attention on a principled frontiersman's agony over the matter of who shot his brother."

Reviewed a new Olive Films Blu-ray over at Slant Magazine.
Posted by Carson Lund at 12:58 PM