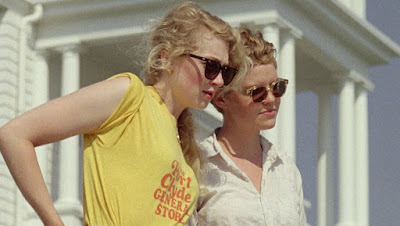 "Among the films to emerge in recent years to exhibit the influence of Jacques Rivette, Bingham Bryant and Kyle Molzan's For the Plasma wears its reverence for the French director most transparently. It gives us a coastal Maine setting vibrating with an air of the unreal; two female protagonists who, while tasked initially with one project, gradually become embroiled in other clandestine pursuits signifying some slippery conspiracy; a chain of scenarios involving mapping, tracing, and analyzing; and well-dressed businessmen with apparent connections to a larger, just-out-of-reach intrigue. The film's two leads resemble Rivette muses of yesteryear, with frizzy-haired, monotone Rosalie Lowe evoking Bulle Ogier and the boyish Anabelle LeMieux inviting comparisons to Juliet Berto circa Out 1. Eventually, one even goes boating."

Review continues here.
Posted by Carson Lund at 10:50 AM