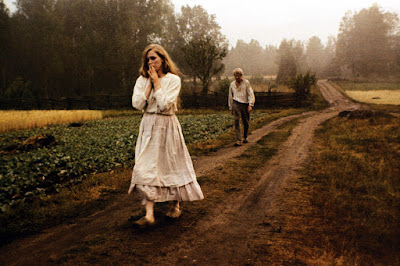 "'We're the best of friends.' That's the endearment that a married couple, played by Max von Sydow and Liv Ullmann, whisper to one another in Jan Troell's The Emigrant. For anyone familiar with von Sydow and Ullmann's collaborations in the filmography of Ingmar Bergman, it's a deeply moving moment as much for its narrative context—Ullmann's character is suffering from seasickness aboard a ship to America as a storm beats against her cabin and fellow peasants wail outside the frame—as for its metatextual implications. The two actors sparred, trembled, and agonized together on screen so routinely under the gaze of the famously penetrating Swede that a comparatively blissful moment almost registers as a glitch, even as it doubles as a validation of the pair's fruitful working relationship. It's hard to imagine any fan emerging from the scene, sensitively prolonged by Troell in intimate close-ups, with dry eyes." Review of an excellent new Criterion Collection disc continues at Slant.
Posted by Carson Lund at 2:48 PM