The Front Page (1931) A Film by Lewis Milestone 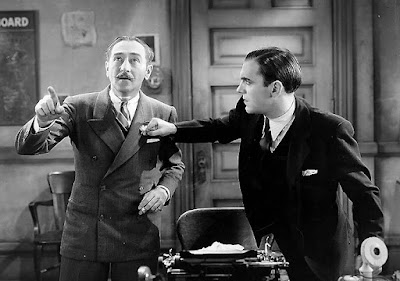 "Key to the 1930s newspaper comedy is the disjuncture between the hermetic bubble of the press room, where typists fire away at their machines and local stories get barked back and forth, and the vast, abstracted, presumably filthy world that lies outside it. The Front Page, the film that many credit as the subgenre's catalyst, puts this internal/external split front and center. Lewis Milestone's direction emphasizes the closed-off quarters of the Chicago news office to such a stifling degree that the camera almost never leaves. On the rare occasion that it does, a preponderance of frames within frames—shots through car windows, compositions that place concrete walls all around the subjects—underline the idea that the newspapermen who work in this 'round-the-clock industry can never really escape it. In a telling shot that gets repeated throughout, the team of fast-talking reporters reacts to something on the street below their elevated office and Milestone tracks from inside to outside, at which point the men are seen boxed in by the window frames." Full review of a new Kino Classics Blu-Ray of The Front Page available at Slant.
Posted by Carson Lund at 11:18 AM