Cemetery Without Crosses (1969) A Film by Robert Hossein 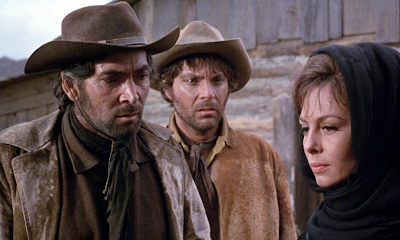 "If Cemetery Without Crosses feels subtly but unmistakably different than other westerns, that's because it is: It's the lone French western to emerge from the genre's European (though mostly Italian) overhaul in the mid '60s. This geographical and cultural novelty adds another layer of pretext to the film—importing and performing a popular filmmaking mode from another country, and indeed even offering its own spin on the spaghetti westerns of Sergio Leone (who, in a telling gesture of artistic cross-pollination, guest-directed one scene). Hossein, who stars in his own movie as a mysterious lone rider lured back into violence by an old flame, was a popular actor in France at the time (Jules Dassin's Rififi being one of his celebrated roles), and with Cemetery Without Crosses he uses his star persona to both point toward the icon-driven nature of the classical American western and ultimately undercut the narrative implications of that tradition." Full review of the new Arrow Films Blu-Ray courtesy of Slant Magazine.
Posted by Carson Lund at 10:40 AM