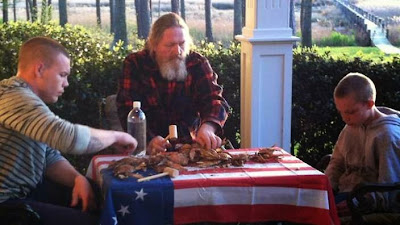 "Suiting its self-consciously strange, decidedly non-commercial bent, Young Bodies Heal Quickly aims to function more as provocation than big statement, but its lack of dramatic specificity places it in a precarious middle ground between exacting character study and ethereal parable. Like so many road movies before it, the plot jerks into motion with a murder, the accidental result of just another day horsing around in rural Maryland. The older brother picks a fight with a pair of young female four-wheelers, and the younger brother, attempting to stop the violence, lands a wooden bat on the backside of one girl's skull. It's an arresting scene in its sense of ferocious randomness, captured with more deliberate handheld sloppiness from seasoned low-budget DP Sean Price Williams, but what follows quickly reorients the movie's approach, shifting it from vérité to Bressonian remove." Full review at Slant Magazine.
Posted by Carson Lund at 9:51 AM