The Grand Budapest Hotel (2014) A Film by Wes Anderson 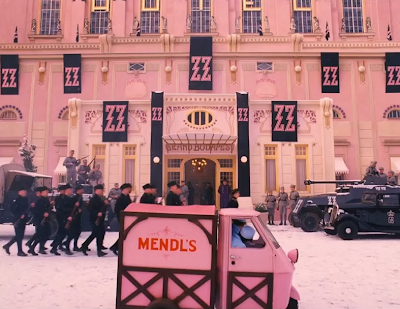 (Note: This is more a series of somewhat disconnected notes and observations around The Grand Budapest Hotel than it is a formal review with plot synopsis and comprehensive coverage. It's best read after viewing the film—if at all, of course.)

Cultural theorist Arjun Appadurai wrote about a concept he called “nostalgia without memory,” which he defined as a new phenomenon of globalization in which the markers of one culture escape from their historical, geographical context and become another culture’s past, resulting in a vague nostalgic longing for an experience that the participants of that culture have not directly accessed. His point was made in a specifically post-colonial context (the flaunting of American symbols by Filipinos), but the human core of his argument – an indefinable feeling of longing for a past that you never experienced and which can only be witnessed through cultural detritus – is something that haunts The Grand Budapest Hotel.

Here, Anderson’s nostalgia is for a world prior to a descent into fascist homogenization—specifically a decadent early 20th century sensibility when institutions still could have a measure of flamboyance and style. His titular hotel becomes the embodiment of this utopia, a fleeting vision of cultural excellence tucked away, at least at first, from the corrupting forces of the outside world. Gustave H., who presides over the alpine institution with a punctilious attention to detail, is an obvious director surrogate, and, in a generous touch, all of Anderson’s most notable regulars (Owen Wilson, Jason Schwartzmann and Bill Murray) appear in minor roles as the concierges across the film’s several timelines. Having crafted elaborate mini-universes in film after film, the hotel represents simultaneously the most idealistic and most self-conscious expression of the pure, untainted world Anderson’s films and characters have strived for.

What gives the film such poignancy is that its utopia is acknowledged as something elusive and illusory. Anderson erects four layers of temporal and psychological remove – girl in the park (modern times?), novelist (80s?), his younger self (60s?), and the older incarnation of lobby boy Zero Moustafa – to separate himself from the story proper, which takes place in the fake northern European region of Zubrowka just before the onset of WWII. He also peppers his script with reminders of the impermanence of life: the film’s final line, narrated by the novelist who wrote the tale of meeting the hotel proprietor, is devastatingly concise: “it was a charming old relic, but he never did see it again” (paraphrased). Compromised by the rise of evil in Europe – here manifested as a fascist police state that ends the film festooned with logos landing somewhere in between the Zissou emblem and the swastika – the hotel can’t maintain its fanciful identity. Grim historical realities (real or imagined) have hovered just beyond the contained, bittersweet surfaces of Anderson’s cinema before; here they are shown protruding into the plot.

Described as “too decadent for modern tastes” by Zero in his old age, the hotel of the 1930s is an elegant getaway carefully decorated in welcoming shades of pink, purple and red. By contrast, the 60s iteration is a crumbling, orange-hued downgrade more in line with brutalist design tendencies than the Victorian qualities of the original (a sly visual joke shows “Boy with Apple” – the fictional artistic masterpiece that is so valued in the 30s and plays a key role in the plot – askew on the wall behind the concierge desk). That even this renovation looks opulent by today’s institutional standards points to Anderson’s fundamental idea about the aesthetic sterilization and increasing cultural neglect that runs alongside supposed historical “progress.” 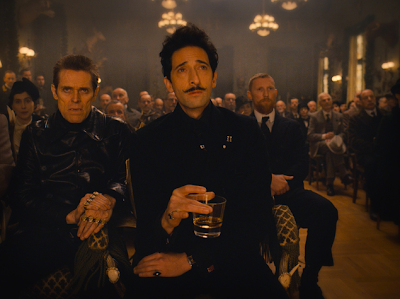 The Grand Budapest Hotel represents the logical, highly advanced live-action extension of the frame-by-frame thinking of Fantastic Mr. Fox. Animation seemed to really get Anderson’s gears churning, forcing him to think on an atomic level more than ever before; every frame counted in the film’s mathematical design. If Moonrise Kingdom, aesthetically Anderson’s loosest movie since Bottle Rocket, was a slight move away from that level of control, TGBH finds him back on that wavelength in an extravagant big-budget context. Anderson may be orchestrating the movement of bodies and objects rather than miniatures, but the dexterity of his direction is no less staggering; this is a film that feels timed to a metronome. (I kept thinking of a Kevin Barnes lyric: “We've got to keep our little click clicking at 130 B.P.M., it's not too slow.”) Scenes pile atop one another, details accrue, and comic motifs weave in and out, all set to the near-constant time-keeping pulse of Alexandre Desplat’s score. Perfume sprays and cable car squeaks witnessed in the diegesis become part of the symphony, which is only the most conspicuous example of the harmonious fusion of music and drama here. The less tangible impression is of long stretches of verbose dialogue timed to a stopwatch. I wouldn’t be surprised if each shot has at least 30 alternate lives sitting on the cutting room floor due to being a few frames out of pace.

The result of this rhythmic command is a mode of comedy that’s heavily reliant on pacing. Some of the film’s most clever details emerge out of slight disruptions to an established tempo. When the police arrive at the hotel to charge Gustave H. with murder, the camera stays for an extended moment in the room he and Zero leave in order to catch the seemingly inconsequential detail of the lobby boy briefly returning to hang something up. Later, during a hysterical prison escape, there’s a visual gag regarding exceedingly long ladders; in each case, Anderson waits until the ladder passes fully through frame to cut to the next shot. Then there’s the tall prison inmate whose torso blocks our vision every time he approaches, forcing a framing adjustment that throws off the balance of the scene. If these moments achieve their humor through a sudden lag in cadence, the film’s climactic alpine chase sequence is hilarious for the opposite reason: it’s impossibly fast, sending an otherwise speedy movie into comical overdrive.

All of which is to say that Anderson’s sense of rhythm and tempo now matches the great purveyors of silent comedy.

A minor note: Saoirse Ronan’s quiet presence is extraordinary. That fourth-wall breaking close-up of her on a merry-go-round, carnival bulbs swirling behind her and sending ripples of reflected light across her face, nearly stops the film dead in its tracks. It’s TBGH’s equivalent of Margot Tenenbaum arriving off the train in slow-motion. 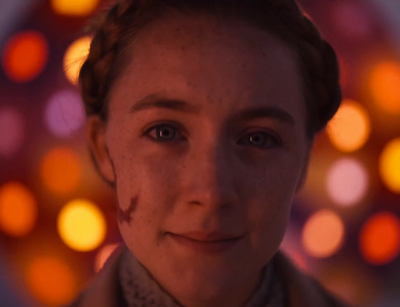