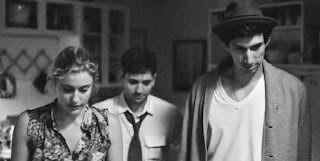 In an American film culture crowded with evocations of drifting twentysomethings searching for a sense of stability and meaning, the latest character drama by Noah Baumbach, Frances Ha, seems at first glance a retread of overly familiar territory. Frances (Greta Gerwig) is an eccentric New Yorker who can't sustain a job, an apartment, or a romantic partner. She struggles to pay her rent. She is prone to fits of spontaneity, to impromptu vacations and last-minute plan changes. But for Noah Baumbach, who has set himself apart from his contemporaries with a humbling, nonjudgemental curiosity for his characters and an intuitive understanding of everyday interactions, this tired scenario is just part of another milieu waiting for detailed observation and empathy. Frances' "flaws" are not simply treated as lazy fuck-ups; each shortcoming is assigned its own practical reason for being. The film's characters are never less than real people, inspiring neither the seesaw between self-pity and self-aggrandizement that characterizes a much-touted show like Girls nor the simplistic anti-social comedy of discomfort that has marked the mumblecore movement of the past decade. Frances Ha is a compassionate, complex drama about people trying to find footing in their own chaotic lives.

It's also an uncharacteristically lighthearted film in the context of Noah Baumbach's career, which has variably been subject to criticisms of misanthropy – even, I should add, from myself. In my review of Greenberg, a film I liked very much with some reservations, I wrote that "it would be interesting and indeed a sign of maturation if Baumbach could transcend his own niche, which currently displays a rather narrow worldview." I was referring to Baumbach's penchant for compulsively limiting his characters' futures to something dismal and weighed down by the past, which I nonetheless respect as a committed aversion to sentimentality. Frances Ha, however, finds a cozy space between pessimism and melodramatic simplicity, even as it concludes on the most explicitly joyous moment in his body of work: a jubilant Gerwig directing her gaze longingly off screen at her newly reunited best friend Sophie (Mickey Sumner), proclaiming with utter conviction that "she's my best friend!" as a bouncy soundtrack leads into the film's almost too-twee finale (Frances failing to fit the full length of her name into a slot in her locker at a dance studio, revealing the movie's title).

Shot in placid monochrome on location in New York City, San Francisco, and Paris and doused in Delerue, Baumbach obviously has the French New Wave on his mind. At one point, we even glimpse a poster of Francois Truffaut's Small Change (1976) on the walls of one of Frances' temporary dwellings. The debt is both obvious and substantive: Frances Ha echoes the spirit (restless, witty, self-conscious), the narrative (drifting young people in urban environments), and the technical crudeness (the Canon 5D Mark II being a contemporary equivalent of the Bolex or the Cameflex in terms of size and efficiency) of Godard and Truffaut's early films, even sharing deeper thematic resonances with a less fashionable New Waver like Eric Rohmer (specifically the film's interest in characters leading one stable reality, being tested by another, unstable reality, and finally returning to the first reality). These inspirations have always been at the core of Baumbach's cinema, but just as Margot at the Wedding's gloomy island setting betrayed more than a little reverence for Bergman, Frances Ha's air of homage comes repeatedly to the fore.

Reminiscent of these older films yet still central to Baumbach's style is the film's rapt focus on friendship. More than a tale of Frances' romantic failings, her existential crossroads, or her struggles within a bum economy (and it is all of these things successfully), Frances Ha is about the impassioned, shifting, uncertain but never indifferent relationship between Frances and Sophie. The two describe themselves as "sexless lesbian lovers" in the early stages of the film, and Frances never misses an opportunity to regale someone of their shared histories coming from the same town and the same school, but different post-collegiate life trajectories (Frances want to become a dancer despite her graceless physicality and Sophie enters into a superficial marriage that finds her living briefly in Japan) gradually lead them apart. As Sophie haphazardly distances herself geographically from all she has known in pursuit of a socially respectable adult identity, Frances regresses back to odd jobs at her alma mater and sojourns at her parents' home.

In writing, this scenario sounds schematic, and indeed the film's narrative shape has been traced countless times before. But Baumbach's unassuming direction, Jennifer Lame's fleet-footed editing, and lively performances suffuse the film with momentum and charm. Baumbach shoots much of the action in roomy medium shot, accommodating for Gerwig's physical spontaneity and for the most part refusing to underline key emotional progressions. This comfortable, respectful distance – neither dwarfing nor suffocating – is coupled with an editing rhythm that responds intuitively to tonal shifts in the narrative. The film opens with an exuberant, breathless montage catching bits and pieces of Frances and Sophie's goofy rapport with one another before slowing its pace considerably as the two break apart. This strategy leads to the film's beautiful, economical evocations of aimlessness, such as a shot of a displaced Frances trudging beside the Seine as Bowie's "Modern Love" blazes incongruously on the soundtrack (echoing Carax's Mauvais Sang (1986)), or a mind-clearing long take of an empty forest that slowly reveals Gerwig in the back of the frame talking to her mother on the phone. In such instances, Frances Ha breathes the rhythms of a quarter-life-crisis without attempting to diagnose or objectify this existential juncture. It understands that just beyond every moment of hopeless boredom is one of frenetic chaos, giddy excitement, or blissful friendship.