We Won't Grow Old Together (1972) A Film by Maurice Pialat 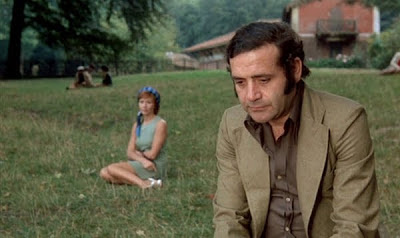 Maurice Pialat's second full-length feature We Won't Grow Old Together is a devastating exploration of a slowly disintegrating romantic affair that is about as brutally honest about the self-destructive interdependency of relationships as any film ever made. As is typical of French cinema of this era, it concerns a brutish, self-involved artist type and his ethereal, sophisticated partner, a tendency seemingly reflecting an autobiographical realm for filmmakers like Godard, Truffaut, and of course Pialat. But whereas Godard and Truffaut's early romances are tinged with a certain swagger, Pialat's work is defined by its serene neutrality. We Won't Grow Old Together takes as its subject the relentless coiling and recoiling of a relationship, with characters variably looking villainous and sympathetic, and Pialat's camera remains a curious, impartial observer, never quite passing judgment even during the lovers' more explosive fights. There's an unknowable complexity to human relationships, Pialat understands, and his respectful approach preserves this truth.

Things get even more complicated in adulterous relationships, which We Won't Grow Old Together proves – imperceptibly at first – to be studying. Jean (Jean Yanne) is married to Françoise (Macha Méril) but has been involved with a mistress named Catherine (Marlène Jobert) for six years. Françoise's screen time is radically truncated in favor of Jean and Catherine's, making it appear initially as if Jean and Catherine in fact married and Françoise is the mistress (that Françoise embodies a level of acceptance and even support for her husband's extramarital activity is an idiosyncrasy I can only interpret as being part of a different mid-century French mindset). But Pialat's choice to focus on the relationship of unmarried lovers is pivotal: this is a situation in which no formal agreements have been made and only emotional rather than concrete stakes are on the line. Such a relationship superficially grants a lack of concern for one another's feelings, and Jean takes this to the extreme by assuming a degree of license for psychologically and emotionally abusive behavior. For Pialat, this arrangement is fertile ground for emotional honesty.

The film begins with Jean inviting Catherine to the Camargue region where he is visiting for one of his several odd jobs as a cameraman. (Jean is, as so many New Wave protagonists are, a filmmaker and a cinephile, and his sporadic references to great directors are the vehicles for Pialat's own cinephilia.) On this trip, Jean treats Catherine like swine (or, as he puts it, a rat) for no discernible reason, showering her with bitter remarks and disturbingly direct (albeit untruthful) summaries of her personality. We learn that Catherine is an aspiring actress with inconsistent success, and Jean's cruel behavior seems to stem as much from his inability to possess her artistically as it is to do so personally. During these spiteful rants, Pialat's detached camera (either remaining wide or fixed in eye-level two shot, but only rarely relaying information in the shot-reverse-shot formula) makes plain the angelic composure of Catherine in contrast to the animalistic tendencies of Jean, which is not so much a passive submission to Jean's vitriol as it is an assertion of her own strength. Among its many other compassionate qualities, We Won't Grow Old Together is a celebration of Catherine's wisdom and resolve.

Lest it seem unwise that Catherine remain involved in such a problematic relationship, let me point to the ways in which Pialat displays an understanding of the complexity of human behavior and how breaking free from long-term relationships is never as easy as simply walking away. After a certain length of time watching resolution follow psychological combat, it becomes clear that the film is adopting a structure of repetition: Jean explodes at Catherine, Catherine deflects, Jean returns to her to offer cool tenderness, and the cycle repeats. The closest the film comes to schematism is in a too-clever cut from Catherine declaring her wish to never see Jean again (or something to that effect) to a shot of Jean picking up Catherine from a business meeting presumably only a day or two later. Aside from this rather calculated effect, Pialat allows great space – through pauses, through cresting and falling tension, through wordless sequences of narrative cushioning – for the vulnerable emotional landscape between the two to develop organically. The film does not follow a tight-knit timeline either: one moment, the lovers are conversing in Jean's car in Paris; the next, they're at Catherine's mother's (Muse Dalbray) seaside cottage. Dissolution and reconciliation, as unwise a cycle as it may seem given the destructive circumstances, is occurring at a naturalistic pace that is only obscured slightly by Pialat's steady fascination with the process of break-up, which manifests itself in an elliptical cutting rhythm that often forgoes the chunks of time the two spend apart to focus on moments of connection. 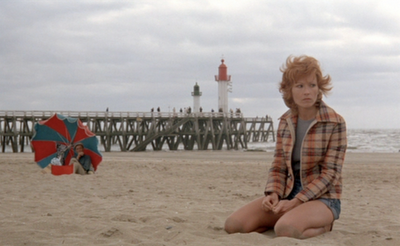 Pialat balances Jean's aggression with scenes of comparative serenity that, if not quite capable of justifying the continuation of this affair, at least pose high points that suggest why Jean and Catherine got this far in the first place. Of particular note is the section of the film spent by the sea, where the neutralizing effect of the ocean and Catherine's parents seems to illuminate an otherwise subsumed affection between the two that is crystallized in a lovely scene of late-night waltzing. Suggested by a single long take of Jean and Catherine in the middle of a crowd, the scene shares the rejuvenating ambiance of a similar moment in Claire Denis' 35 Shots of Rum, but unlike Denis' climax, which seems to crystallize undercurrents in the rest of the film, the peace and quiet rendered here is only fleeting. When they return to the cottage, Jean makes a sexual advance on Catherine during a comfortable embrace in bed and upon rejection finds himself tearing her shirt and throwing another fit. It's harsh and disruptive, but utterly plausible in the rugged emotional terrain cultivated by Pialat throughout the film.

We Won't Grow Old Together pulls a fascinating paradigm shift in its third act by placing sudden emphasis on Jean independently coming to terms with the cruelty of his behavior. Faced with a Catherine whose patience is wearing increasingly thin, Jean must consider the question of whether or not making a concerted effort to resolve issues is worthwhile. Françoise returns crucially in this section to side wholeheartedly with the abused Catherine, even as she calmly directs her husband towards an overdue resolution. Here, Pialat peels back Jean's rigid surfaces to reveal a clumsy, fundamentally sensitive beast underneath. It's the kind of radical openness and enduring compassion that cinema rarely has the time, energy, or intelligence for, and it transforms the film from an insightful study of a romantic relationship to a broader, more devastating investigation into human frailty. I can't think of a shot that could better clarify this than We Won't Grow Old Together's perfect parting gesture: an image, repeated from earlier in the film, of Catherine flailing about joyfully in the ocean, overtaken here and there by a wave. It's an impression of happiness that will likely haunt Jean forever, representing a kind of emblem of the casualties of his behavior even after any specific memory of Catherine has faded.