Bluebeard (2009) A Film by Catherine Breillat 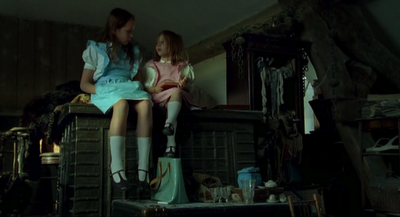 The films Catherine Breillat has made after Anatomy of Hell have marked a compelling and cohesive direction in a career otherwise defined by scattershot provocations. Her career trajectory now loosely resembles David Cronenberg's; both begin with abrasive, explicit hammers to the cerebellum (a mode Cronenberg pulled off with greater success) and eventually switch gears suddenly, making way for talky period dramas that only appear sober in relation to the ornery visuals that preceded them. In Breillat's case, this transition has yielded fruitful results, and Bluebeard is yet another assured and thought-provoking effort alongside the restrained and mysterious The Last Mistress (my favorite of the three) and the deliciously surreal The Sleeping Beauty. These films share a singular approach to fairy tales and period detail, a detached, self-consciously unreal presentation of history that meshes elegantly with their essayistic, analytical nature.

Like its follow-up, Bluebeard operates on two levels: in Sleeping Beauty, it was a whimsical hundred-year dream and an unhinged reality, and in Bluebeard, it's a scene of two sisters reading Charles Perrault's titular fairy tale and a visualization of the story. Having gathered their ideas about the social institutions Perrault tackles in his cautionary tale (courtship, marriage, sex) merely through an uneven mix of watered-down official explanations and fragments of hearsay, the sisters explore and discuss the text in their dusty attic like kittens suddenly presented a new, curious object to play with. The younger of the two, Catherine (Marilou Lopes-Benites), handles the material with the easy confidence expected of a child with such a minimal grasp of the topics it deals with (she believes homosexuality to mean the love that consummates a marriage), while the older sister, Marie-Anne (Lola Giovannetti) - perhaps because she's within a stone's throw of puberty - urges her sister to stop reading even as she hesitantly, fearfully listens in. The dynamic of naïveté and apprehension existing in this situation is matched by Breillat's dichotomous presentation of the fairy tale setting, a place of stiff mannerisms and postcard-perfect compositions interspersed by the occasional hyper-sensual image: a ladle entering a bubbling broth in tight close-up, a beheaded foul mechanically flailing about as its body perishes, the barbaric Bluebeard (Dominique Thomas) devouring a massive hunk of meat, three girls hanging above a floor skimmed in blood. Shots like these spike Breillat's otherwise hermetic, controlled atmosphere, and generally correspond to some psychological or emotional development both in the sisters reading the story and the sisters within the story. Not that there's much difference; by giving them variations on the same names - the sisters in 17th century France are named Marie-Catherine (Lola Créton) and Anne (Daphné Baiwir) - it's clear that Breillat means to suggest the universal impact of the fairy tale, the sense of identification naturally triggered in young readers. In this regard, the spunky, assured Catherine is mirrored by the confident, gorgeous Marie-Catherine, while the frightened Marie-Anne gets her surrogate in the form of Marie-Catherine's jealous, ill-tempered older sister Anne. Sibling rivalries, Breillat argues, have featured the same core components across generations.

In the tale of Bluebeard proper, Marie-Catherine and Anne are students in a convent whose father has recently died, forcing them to return home to their grieving and impoverished mother (Isabelle Lapouge). On their trip, they catch a glimpse of Bluebeard's mansion, a towering, isolated castle on a hill that reflects the man living in it. Word trickles down to these girls that the women Bluebeard marries are never seen again once they enter his grounds, and this news provokes the expected terror and curiosity in the older and younger sister, respectively. One of Bluebeard's messengers approaches the poor, fatherless family offering stability and happiness, the implication (unchallenged by the mother) being that another man must fill the patriarchal void left by the deceased father in order for the young girls to achieve any kind of upward mobility in this strict society governed as much by gender as it is by wealth and possessions. Soon enough, Marie-Catherine is living with the behemoth Bluebeard, though the relationship dynamic does not play out as predicted; one of the first things Marie-Catherine does is request her own room small enough to prohibit Bluebeard from entering, a cunning, lightly seductive ploy to assert her power in this male-dominated zone. 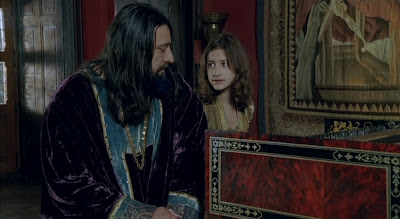 Indeed, it's Marie-Catherine's smarts and charm that allow her to subvert, for quite some time at least, Bluebeard's oppression. The mere sight of her dainty figure juxtaposed against Bluebeard's vast, imposing frame suggests an absurd degree of dominance only augmented by the cartoonish scale of the interiors, but in the face of Marie-Catherine's fortitude Bluebeard appears tender and oafish. Shades of Beauty and the Beast are inherent in Perrault's original, and I suspect Breillat intends to gesture towards them only to eventually diverge in the opposite direction of that openly romantic sensibility. If the relationship between Beauty and the Beast is ultimately open and honest, defined by a willingness to seek the ideal, Marie-Catherine and Bluebeard's is so entrenched in pre-destined social roles that it plays like a long test in which both are constantly navigating the treacherous waters of the other person, searching for untrustworthy qualities even as they hope not to find any. Bluebeard's final test of Marie-Catherine's character is to have her hold on to a special key while he's out of town, meanwhile forbidding her from the entering the room it opens. What ensues is no less shocking for its sense of inevitability. It's a confirmation of the enslavement of these individuals to the overarching sexual politics of their environment.

Breillat formalizes the cyclical nature of the denouement by literally repeating shots over and over, all the better to reflect the same ideologies of marriage and gender being taught to young girls again and again. To cement the impact of the story on the minds of the contemporary sisters, Breillat first has Catherine appear in the fairy tale world performing Marie-Catherine's behavior and eventually intertwines the final act of the tale with the girls' own trajectory. As such, the building tension between Marie-Catherine and Bluebeard is not cut off prematurely as it may appear to be, but is rather extended and completed by the scene between Catherine and Marie-Anne. Encroaching violence spills over into their psyches; Catherine delights in her sister's discomfort, and Marie-Anne, reaching a climax in her awareness of romantic inequities, falls, literally, into adolescence, through the space left by a missing floorboard in the attic. It's a transition that, as in The Sleeping Beauty, is violent and disorienting.