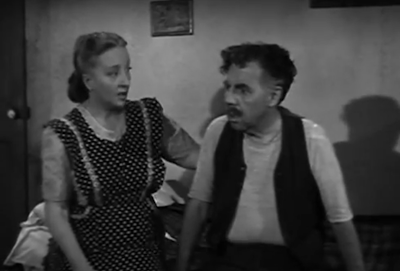 When Ramiro (Fernando Soler), the rich drunkard in Luis Buñuel's The Great Madcap, wakes up from an intoxicated stupor to find himself dressed in rags and surrounded by dusty, cement walls, he resembles Lon Chaney Jr. awaking to the shock of misplaced hair and fangs in The Wolf Man, or Bela Lugosi finding much to his dismay that a scientific experiment has given him thick black fur in The Ape Man, or any other B-horror character emerging in unexpected new form after a night's sleep. The only difference is that it's not hideous physical deformities that cause Ramiro's horror and disgust but rather a sudden shift in material wealth and social class, as if he had taken one wrong turn and wound up in the slums indefinitely. In the context of the film, it turns out his experience of poverty is only fleeting; he eventually discovers that his family, fearing that he might descend into alcoholic madness, has merely played a prank on him to inject some much needed doses of humility (their wanton gamesmanship is no less a trivialization of the poor). But like many of the Spanish director's bold conceits, this one has an inherently charged political connotation: the privileged bourgeoisie always possess a knee-jerk smugness towards the lower rungs in the social system, as well as a denial of the existence of economic hardship so powerful that issues of poverty might as well be a surreal fabrication.

One imagines this disorientation to have been something like the feeling Buñuel himself had when suddenly forced in the midst of public backlash following L'âge d'or to stop making features, and subsequently when he re-emerged nearly twenty years later to begin working on commercial Mexican fare. The Great Madcap is the second of these efforts (following the light musical Gran Casino) and the first to point convincingly towards Buñuel's future, even if it's a somewhat rigid and lopsided screwball comedy, a film with only fractions of the satiric bile and mad logic he dropped in L'âge d'or and would eventually unload later in his career. Hints of these tendencies are most apparent in the film's absurdly broad setup, which begins with Ramiro getting bailed out of jail and segues into his reintegration with his ungrateful family. No one in the family - not Ramiro's marriage-obsessed daughter Virginia (Rosario Granados), his spoiled son Eduardo (Gustavo Rojo), or his two scheming, deadbeat brothers Gregorio (Francisco Jambrina) and Ladislao (Andrés Soler) - has fully absorbed the impact of the recent death of Ramiro's wife, even as it's launched Ramiro himself into an alcoholic fit. They continue to shamelessly feed off of their father's wealth and resources. 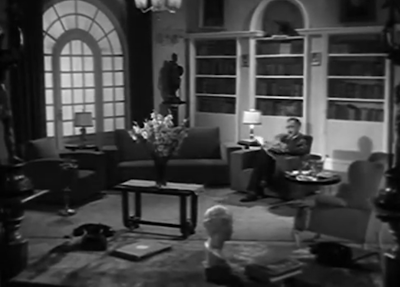 During these opening scenes that establish the family and their regular routine of debauchery, Buñuel abandons subtlety in favor of wide strokes at upper-class complacency. Vignettes around the mansion include the family butler Juan justifying the theft of his Ramiro's cigars by claiming that he feared they would dry up, Eduardo pining for a new luxury car after supposedly destroying his previous one, and Ramiro fielding various requests for money. At work, Ramiro has taken to drinking in an attempt to forget his grief and has received blunt criticism from his peers for it, but his economic and professional status has allowed him to indulge regardless. In this early stage of the film, everything takes place indoors on boxy, conspicuously cheap sets, a logistical necessity that helps to emphasize the sense that the accoutrements of a wealthy lifestyle are ultimately synthetic, superficial, and fleeting; stripped suddenly of their luxuries, the family would resemble ducks with their heads cut off, totally ignorant of how to exist organically in the exterior world amongst other people. In one hilarious wide shot, Buñuel frames Ramiro and his well-dressed friends stumbling drunkenly to sappy orchestral music, the idea being that even within their familiar surroundings, they're already clueless.

The family's subsequent prank on Ramiro is therefore tinged with devilish irony, ostensibly designed to teach the patriarch human values that they themselves lack. Without the knowledge the family possesses that all will naturally return to "normal," Ramiro, after shaking off his dreamlike shock, inevitably descends into depression and makes a ridiculously botched attempt at suicide. Aiming to jump off the roof of a building in a poor district of Mexico City, he only falls a few feet before being braced by a bit of scaffolding and rescued by a construction worker named Pablo (Rubén Rojo) who insists that if he were to hit the ground from such a height it would only result in a life in a wheelchair that would arguably be worse than death. That Ramiro falls for Pablo's heroic rescue disguised as an obvious lie does little to bolster his appreciation of life and love though; soon after, when he overhears a conversation about the prank and fumes at his family's insensitivity, he responds by launching a trick of his own in which he purports to have actually lost his fortune, meanwhile continuing to live in his mansion and overseeing his family's newfound poverty. It's a mean-spirited turn of fate engineered by Ramiro that he passes off as his own attempt to teach his family members a sense of dignity and humility; the difference is that they gradually come to embrace their modest means of living, finding small sources of success and happiness. 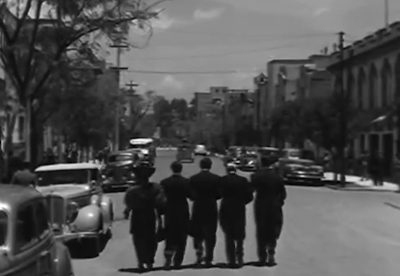 Despite the ludicrous nature of these twists and turns, there's a fundamentally simple-minded core to The Great Madcap, an element of moralistic pandering inherent in its script that belies even Buñuel's subtle suggestions that the problems with humanity are too broad and diffuse to be reduced to class distinctions (after all, nothing proves capable of shaking the family's place in the upper-class, but their pettiness largely remains even after some breakthroughs). Buñuel sees the major issues in the film's ensemble of characters to be an absence of love and appreciation towards others and a blindness towards diversity, issues too deep-seated to be cured by loopy plot devices, but the film nevertheless implies that Ramiro's family has been taught a lesson through their involuntary hardship. Virginia, initially set upon a marriage to the wealthy Alfredo (Luis Alcoriza), changes her mind when confronted with her love for Pablo, a romance that transforms her initially narrow worldview. Pablo's near-rejection of Virginia on account of his discovery that she is in fact rich adds a blip in the streamlined nature of the film's moral, offering a lower-class attitude nearly as reductive as that of the financial elite, but it's treated merely as a momentary reaction to shock rather than a bottomless aversion to a group of people and therefore doesn't signal as the locus of Buñuel's energy in quite the same way that his skewering of privilege does. For the most part, there's a black and white dichotomy at the heart of the film that is occasionally saved by the sheer hilarity of Buñuel's investment, but otherwise threatens to reduce the film to a blunt parable.

If the script's spiral into easy moralizing is its greatest flaw, Buñuel's stiff visual style often fails to shift the attention. Some of Buñuel's stylistic tics - his method of starting a scene on a minor detail before dollying back to reveal the entire space, his habit of bunching bodies together in comical medium shot - emerge in striking ways, usually to underline the way that objects have defined the wealthy lifestyle or to emphasize the smallness and dysfunctional nature of the characters, but the film's default mode is unimaginative wide shots that exist seemingly for no other aesthetic reason than to capture all of the often busy staging in one fell swoop. (An early instance of effective camera movement and cross-cutting follows Ramiro as he makes a mess out of his daughter's wedding recital, and it's predictably one of the most dynamic scenes in the film.) But directors like Buñuel tend to couple weak decisions with convincing ones, and as such, The Great Madcap's combination of rigid studio setups and freer on-location sequences anticipating Los Olvidados' primal vérité offers a fascinating counterpoint to the more schematic choices. When we see children run through the background of a frame, it alone sends a ripple of anarchist energy through this otherwise commercially contained, if frequently funny, product.

Thanks for the recommendation, though I do like to keep the comment boards focused on the film at hand. That said, I did see part of Love Exposure once and didn't understand what the fuss was about - I thought it was pretty sloppy and grotesque, but that was just an impression I got while taking a quick break from my volunteering position at the Boston Underground Film Festival.