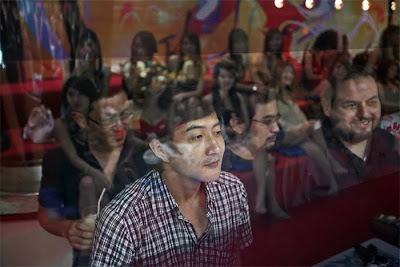 ...I think what Mizoguchi wanted to say in the final shot (of Street of Shame (1956)) was: ‘Starting from here, it's going to be so unbearable that there's not even a film.’ After this closed door, a film is no longer possible. It's terrible, so don't come in."


-Pedro Costa, "A Closed Door That Leaves Us Guessing"
When watching Michael Glawogger's Whores' Glory, the concluding film in the globetrotting Austrian filmmaker's trilogy of transcontinental labor, I was intermittently reminded of a transcript of an inspiring lecture given by Pedro Costa to a school of Japanese film students. In it, Costa spoke of the philosophical and ethical divide between commercial cinema and cinema of truth, analogizing the whole argument to the idea of a door left open or selectively shut. Costa's language is curiously vague for the most part (or at least the translation is), perhaps intentionally so, but what I sense him dancing around is the notion of an ethical line - in no matter what kind of film is being made - that simply cannot be crossed. A film should only show so many details, and in fact it becomes more truthful, and more significant, when it eschews certain aspects of the lives of those onscreen that would in some ways be too intensely private to show, that would inevitably steal a part of the soul of the subject. Enter a film like Whores' Glory, which seems to thrive on tiptoeing across this line, for the most part keeping the door shut but occasionally dipping its feet in the other room. And, given my profound agreement with many portions of Costa's sublime speech, I find myself troubled by the speculation as to what extent Glawogger's few crossings of the line so dutifully established by the structure of his own work actually damn the film as a whole.

For clarification, Whores' Glory is an insanely comprehensive, thematically focused, brilliantly framed, tonally consistent, and refreshingly non-judgmental three-part look at prostitution in separate milieus: Thailand, Bangladesh, and Mexico. Glawogger somehow managed to gain extremely intimate access to a casual urban brothel in Bangkok, a grungy and claustrophobic red-light district in Faridpur, and finally a ghostly drive-in motel expanse just beyond the border of Texas known mysteriously as The Zone, and he codes each section with its own subtle variation on the same aesthetic of vibrant, compulsively composed cinéma vérité. The film's lack of an explanatory voice-over or a clear editorial point-of-view, as well as its ambivalence regarding the definitions of documentary and fiction (unafraid to pit reenactments and stagings alongside more "authentic" fly-on-the-wall footage), all situate it firmly within the same kind of postmodern Direct Cinema practiced by Costa as well as Glawogger's Austrian contemporary Ulrich Seidl, yet there's also an uncommon expressive streak running through Whores' Glory, a desire to use the editorial tools at the disposal to the filmmaker (a soundtrack consisting of mostly P.J. Harvey and CocoRosie tunes, dynamic color and compositional arrangement) to heighten atmosphere. 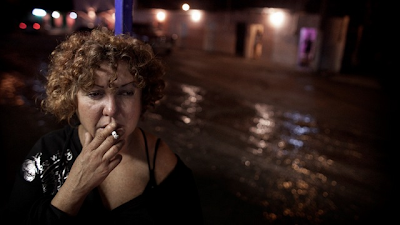 In most cases, that's precisely what Glawogger's stylistic tics do: heighten atmosphere. They don't reduce the lives of the destitute, dispossessed, or less fortunate to graphic displays. Glawogger's particular kind of keen compositional sense - basically an ability to stumble upon striking framings without appearing to set out with that intention when a take begins (his camera is almost always moving, whether handheld or on track, quickly or slowly) - is more about discovering something pre-existing that is beautiful than it is about arranging a subject and its surroundings in a flattering manner. Whether or not Glawogger actually does rearrange elements in the frame, and to what extent, is beside the point, because one gets the feeling that the prostitutes in Whores' Glory are not trivialized or overtly glamorized by the cinematography that contains them. Nor are they by the music that often accompanies the images and gives the film such elegant momentum, but the music does translate a melancholy perspective to the audience and sometimes threatens to derail the otherwise undemonstrative approach. For instance, it's hard to hear P.J. Harvey sing the words "all around me people bleed" or "the city's ripped right to the core" (both from "The Whores Hustle And The Hustlers Whore" off of her 2000 album Stories from the City, Stories from the Sea) and not attribute them to Glawogger's own stance on the matter, which, sympathetic as it may be, suggests an exotic imposition of perspective, a kind of generalized reading of a community.

That reading becomes increasingly problematized by the nature of the film's emotional structure, which begins with the brothel that is easiest to swallow in terms of the level of shocking images on display, and moves gradually into thornier terrain from there. Bangkok's "The Fish Tank" is a business that operates in a very male-centric fashion, dividing its architecture quite firmly by separating the male and females by a pane of glass behind which women are advertised. In Faridpur, the women have more agency, and the entire environment is much more open, encouraging males and females to co-exist in a free market. Mexico differs from both the previous scenarios; its women work entirely on their own, divided into different motel rooms, and they do their "marketing" free of any "pimps" or "mothers." Glanced at quickly, it seems that the relative levels of dehumanization and squalor intersect with one another across the timeline of the film, which starts in a comfortable environment where women are literally numbered and transitions to a grungy, bleak place where individualism reigns. Really, each location - as well as any similarity and difference between them - is just too complex and multi-faceted to be summarized by a pop song, even one by an artist as complex and multi-faceted as PJ Harvey, CocoRosie, or Antony Hegarty. 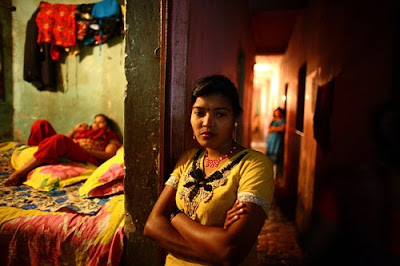 Costa might call this use of music an instance of a film trying to "open the door," to allow the spectator to see himself/herself in the work rather than the truth of what's onscreen. I might agree. There are scenes in Whores' Glory that are wrenching and painful (a Faridpur mother's blunt, honest prediction of the rest of her very young daughter's life, a working girl in the same district asking the camera candidly why this is the path required of women) as well as scenes that are joyous and charismatic (a retired Mexican hooker's over-explicit and hilarious recollection of old jobs (which she recites entirely with her breasts indifferently exposed)), and Glawogger does not need to rely on music to convey the enormity of the human behavior in such instances. The film works well as a loving portrait of these women as people capable of their own personalities, desires, and problems irrespective of their profession, especially when it devotes the same kind of fascination to the actual labor in their lives. Indeed, one feature of Glawogger's film that is so unheard of in films coming even remotely close to the topic of prostitution is an earnest consideration of the job as a job, which is every bit as taxing and devotional as any other career.

Returning to Costa's idea of absence, then, it seems adequate that given Glawogger's unlikely interest in the politics and lifestyle of prostitution that he might benefit from skipping over the actual act itself, both as a sign of respect to the women and as a matter of augmenting the impact of his own film. That's exactly the case for three-quarters of Whores' Glory, but, in a build-up that is almost pornographic in nature, the film finally reveals sex in one of the final scenes in Mexico. The scene is not exploitative in its camerawork by any means, but the very presence of it seems to cheapen the integrity of the work, at the very least dulling its power. This is not some moralist statement arguing for chastity in cinema. Not at all. Quite simply, it's an aesthetic belief. Whores' Glory loses something by revealing that which is so protectively omitted throughout the film. One women in Faridpur seems to comprehend this idea even more so than Glawogger. Followed by the filmmaker to her room earlier in the film, she suddenly turns and remarks: "I'm going to close the door now."