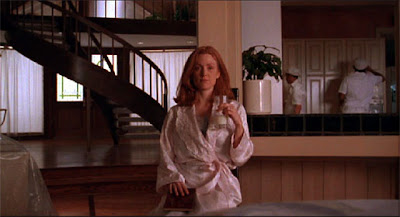 At the core of Todd Haynes' Safe is the idea that the human body is a cage housing fragile, valuable material, and that it's constantly threatened by the harsh and jagged environment around it. When that cage and its components becomes vulnerable for any number of reasons, it stands no chance against the elements. This is precisely the process of disintegration that Haynes documents in his second feature, and it reinforces every aesthetic decision that is made in the first half of the film: the uncomfortably intimate mic'ing technique, wherein tiny microphones seem to rest within the shirts of performers and capture every fidget, swallow, or scratch in precise clarity; the distant, geometric framing that reinforces the endangerment of the individual in the context of larger spaces; the nearly ubiquitous offscreen presence of terror-mongering radio broadcasts; and perhaps even the repeat appearances of sweet, luxury foods like cake and milk, the frequent consumption of which can be undesirable for the digestive system. Haynes makes the audience especially sensitive to even the most innocuous external stimuli (in one shot even a bedroom chair glows with malign purpose), as well as to the internal bodily functions that deal with these forces. It's all a way of framing the supposed "environmental illness" of his main character, the bored, vacant San Fernando Valley housewife Carol White (Julianne Moore).

It doesn't take long to discern the absurdity of this alleged "environmental illness" and begin to identify the metaphorical territory Haynes is working within. But in Safe, it's far easier to realize that Haynes is aiming for metaphor than it is to pinpoint the exact nature of those hidden resonances. Carol wears white throughout a good portion of Safe's first half, one of the first and most salient tip-offs to her hypersensitivity to the outside world and consuming desire for sterility. Also, when asked how she's doing by an equally uninspired suburban housewife or by her skeptical husband Greg (Xander Berkeley), Carol always responds with a timid, clearly half-hearted "well...good," indicating that she's deeply troubled. Haynes applies some of the standard tropes of the horror genre and its repeated emphasis on the clueless female protagonist - consistently having Carol walk her way into uncomfortable scenarios, composing reaction shots that suggest something garish out of frame only to reveal simple domestic items, stranding characters in huge rooms where anything could lurk in the shadows - so that he can undermine them at every turn, forcing the audience to position Carol's rattling psyche as a direct result of her boring, stifling milieu. 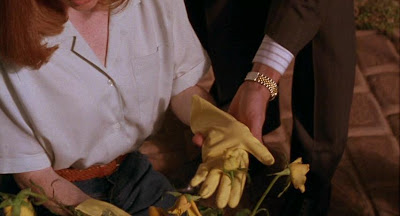 As an openly gay filmmaker, Haynes has been exploring these kinds of victimized figures throughout his fascinating career, and in this homosexual context, Safe becomes a charged allegory for the self-perpetuating anxieties of being forced by societal standards to live the "normal" life, a subservient dynamic that the film insists ends only in misery and isolation. The film is structured on the surface as an enlightenment narrative and on the subtextual level as a maddening descent into obscurity, away from any semblance of civilization or happiness. As Carol becomes increasingly vulnerable in her bright, slick domestic environment (displayed in the kind of Sirkian vibrancy that Haynes would expand upon in Far from Heaven), she in turn seeks any method of medical assistance that can ease her discomfort, shortness of breath, and spontaneous vomiting. When conventional doctors fail to see any indicators of sickness and her husband's attitude shifts precariously from revolt to irritation to sympathy (Berkeley's performance is a quietly virtuoso one), Carol's search becomes progressively extreme until it's clear that what she is really seeking is a full-blown escape from her suburban life. As a result, she finds herself attracted to an informercial for a New-Agey self-help clinic set in the middle of the desert called Wrenwood, which boasts to have found the simple cure for the types of "environmental illnesses" plaguing people like Carol.

At Wrenwood, Carol appears to have found a refuge where she is given space and treated with affection by likeminded peers. The head of the clinic, the seemingly benign and respectful Peter Dunning (Peter Friedman), speaks in calming, inspiring tones about his own healing process from the contaminating factors of reality, referring specifically to pollutants but more broadly to social structures, politics, and media. His teaching and nursing at Wrenwood is decidedly laissez-faire, and he encourages his patients to take the same approach to their own acts of personal rejuvenation; at one point, he even states proudly that he has finally ceased reading the newspaper, a blunt declaration of insularity delivered like a presidential keynote address. Haynes' detached, probing camera, however - always distant and wolf-like, glimpsing all the nuances and details that Carol misses - gradually unravels Dunning's thin facade, revealing him to be little more than a nihilistic hippie and a shameless opportunist. One shot in the second-half of this tantalizingly bifurcated film - shortly after Carol has been relocated from an airy cabin with porch-like screen windows to a circular metal cage resembling both an outer-space vessel and a womb (both offer striking potential interpretations) - catches a view of Dunning's modern mansion sitting atop the peak of the valley Wrenwood is nestled in. One senses that Dunning has built his home there not for convenience or pleasure, but merely to reinforce a messiah-like image of himself to his clients. 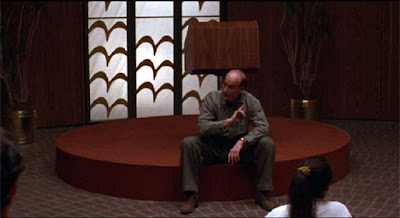 Carol never seems to realize this though, and the film becomes increasingly unsettling as she warms up to Wrenwood, eventually appearing to be at relative peace with herself in this stale, limiting community. Whether or not her husband buys into the mumbo-jumbo about a full healing and return to ordinary domesticity supplies the film with potent ambiguity; Berkeley and Moore's scenes together at Wrenwood possess a morbid awkwardness, as if he is slowly realizing his complicity in the act of gradually burying his own wife alive. In the second-to-last scene of the film, Carol, at the encouragement of Dunning, gives a birthday speech to her environmentally ill peers about how good she feels at the clinic and how much she believes she has improved since leaving her San Fernando Valley existence. In the pale desert cafeteria and under Dunning's vaguely ominous scrutiny, it's staged as a personal breakthrough, but Haynes' stiff mise-en-scène still renders it cold and lifeless, perhaps even more disengaged than at an earlier at-home-mom get-together in the film's first half, where at least there was color and non-diegetic sound to spice up the atmosphere. Any epiphany here is mired by the indistinct rhetoric of Dunning, by his shallow understanding that to retreat entirely from society and relevance is to find yourself. Even Carol herself makes an unintentional effort to prove him wrong in an enigmatic final-act moment when an implied love interest (James LeGros) prompts her to finally proclaim self-love in front of her small, dingy mirror. Perhaps people are necessary after all.

Safe is a scathing critique of the false promises and damaging hidden side effects of supposed "cures" for "abnormalities," which Haynes might identify personally as AIDS. It's not hard to draw a line from Dunning's preachy spiritualist to a clueless conservative posing the idea that homosexuality is a disease that can be cured through self-reflection. But its greatest strength is that it is also many other things: a metaphor for political manipulation and the widespread dumbing-down of civilians, a plea for the equal rights of women in a masculinized society, a cautionary tale about the necessity of exercising freedom in your own life choices, an argument for active engagement in the world, particularly in those things that are readily available to you such as family and community, and a chilling dissection of both the numbing plainness and the ubiquitous hazards in the modern world. Despite his many peaks, Haynes has not made a film this viscerally affecting since.
Posted by Carson Lund at 6:39 PM

Fabulous piece here! I love this film and have for quite some time. I still feel like it might be Haynes's best film and also contains Moore's greatest performance. I'm never usually a big fan of hers but she's outstanding here in my opinion. This film really doesn't have a satisfying conclusion, but I think that's partly the point, right, as you alluded to the ending is probably intentionally a forced attempt at some sort of personal reconciliation. It's easy to see that she's still not right.

Jon, thanks! In its own way, I find the ending extremely satisfying. It's such a haunting close-up that communicates all the resolution you need: Carol is dead to the world. She cannot go down anymore.

I actually find Moore's performance unremarkable. She's definitely functional in this role, and works best as a kind of instrument in Haynes cerebral mise-en-scene, but during the few times that she has to capital-A act, such as when she has crying fits and seizures, it's a bit annoying. That's probably my one complaint here. I guess there is the final close-up, which she does do a terrific job with.

Yeah I guess it's the definition of "satisfying conclusion" that is up for interpretation. Cinematically it works for sure. Moore usually bothers me in other films, but not in this one for some reason. Ha nice to know you don't have to particularly enjoy her performance here to like the film.

This is one of my absolute favorite films, and I think it's still Haynes' best. You do a great job of tackling the many ambiguities of the film, which is a strange kind of horror film, an exploration of reactions to AIDS, a parable for homosexual ostracization from society, and so much more. I love all the horror movie moments in the first half, like when Carol walks into a room and reacts with the kind of horrified expression usually reserved for a dead body dangling just offscreen, when in fact the furniture store has simply delivered the wrong color chair. The Sirkian aesthetic in the first part is dazzling, but here it merely sets up the much more spartan and chilling aesthetic of the second half, when Carol tries to escape her boredom and alienation and instead only finds a different form of self-destruction.

I disagree about Moore, I think she delivers a very subtle and well-realized performance here. I would especially point to all the moments between Carol and her husband, which often reveal the full extent of Carol's submissiveness in some very subtle ways, like how when she's asked to speak about her illness she instinctively looks to her husband, looking for him to speak for her instead.

Ed, now that you point it out, there are definitely a few scenes that Moore nails. She does seem to really grasp the timidness and nervousness of Carol, and that shows through in the scenes you mention. Unfortunately, for me I came away remembering those instances of shrillness that I found too forced rather than the more subtle physical behavior and facial expressions she performs.

I can tell you're quite an expert when it comes to films. And seems to me like we have a few directors in common. The last month I reviewed Happines, and now I've just reviewed The Last Picture Show on my blog: www.artbyarion.blogspot.com

Feel free to check it out.