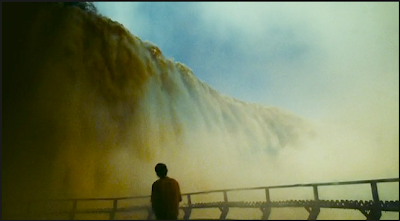 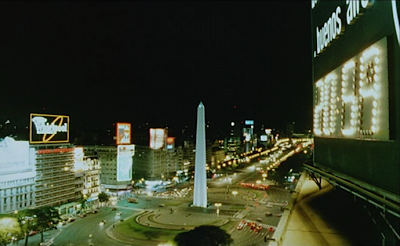 Although Happy Together is only one of two of Wong Kar-Wai’s films to be set almost exclusively in the Western Hemisphere, it perhaps more pointedly concerns the Hong Kong Condition than any of his Hong Kong-set films. The year of its release is of fundamental significance; 1997 was the year that Hong Kong would forgo its position under the colonial rule of Britain and return its sovereignty to mainland China. Curiously enough, as a colony of Britain since it was ceded in 1841, Hong Kong is a space associated more with Britain than with China, and it possesses a destabilized historical and political identity that could only be further confused by its belated assimilation into Chinese culture. As such, issues of identity and stability abound in Wong’s film, and its plot of two young gay lovers relocating for a vacation in Argentina right in the midst of this national event is a fittingly exaggerated concession of spatial displacement. Buenos Aires, conveniently, is a port city much like Hong Kong, a place of heedless immigration and expatriate activity - indeed, the mirror image of Hong Kong as implied by Wong's upside-down shot of the city late in the film. From this contextual foundation, Wong builds a film about the search for connection and meaning in an environment that seems incapable of offering such rewards with people who seem blind to them.

Happy Together’s abstracted representation of Argentina - all time lapse, claustrophobic interiors, and heightened colors - becomes a surrogate for 1997 Hong Kong, where transients have been assigned a newfound sense of identification, just as Ho Po-wing (Leslie Cheung) and Lai Yiu-fai (Tony Leung) assert themselves into the Argentinean milieu that is simultaneously strangely familiar and foreign. The lovers go to the city in the first place to visit the Iguazu Falls, a vast waterfall canyon that comes to represent an unattainable oasis as their relationship gets increasingly unstable, breaking out in fits of rage and jealousy that keep them confined to a tiny, dilapidated apartment room within the city. Wong bookends the film with a magnificent aerial shot of Iguazu, its dark mist billowing from the gulf in between. It's very likely the same image used twice, but it nonetheless transforms from something that is sublime and seductive to something forbidding and impersonal, a powerful indication of how turbulent Ho Po-wing and Lai Yiu-fai's journey is and how much intimacy Wong is able to capture in the process. Like their own native city, the location has become warped and unreal, no longer possessing its initial magic and seemingly inhospitable to life. The lovers' relationship is plagued from the beginning of the film by bitterness and jealousy, and only fleetingly interrupted by rare moments of compassion and physical contact. Wong’s extratextual context suggests that the trauma of the lovers is due largely to a missing basis of stability. Both men’s families are out of the picture, underlining Hong Kong’s larger issue of social division and individualization, and one gets the sense that Ho Po-wing and Lai Yui-fai would completely disappear were it not for their frail connection to each other. They're both true wanderers, lonely souls without a clear idea of what they are searching for or what they want out of each other. While Lai Yui-fai internalizes his disappointments, Ho Po-wing returns almost nightly bragging about his sexual encounters and ordering treatment for his cuts, bruises, and broken bones, symptoms of a dangerous and unfaithful lifestyle. In many of the film's finest scenes, Leung and Cheung deftly convey the schizophrenic tendencies of a relationship without defined boundaries, swapping mid conversation to become the powerful or the powerless. Wong's sympathy generally leans towards Lai Yui-fai, the more sensitive of the two, but he invests compassionately in the rebellious, traitorous Ho Po-wing too, who finds himself alone in their Argentinean apartment without Lai Yui-fai late in the film, one of the many instances in Wong's filmography of characters connecting through absence. So often it is distance - not proximity - that denotes intimacy.

This sentiment is stretched to a subplot involving Lai Yui-fai's co-worker at a tourist-friendly Chinese restaurant in Buenos Aires named Chang (Chen Chang), a character who is only introduced late in the film at a time when Ho Po-wing is at his most emotionally distant. Lai Yui-fai, despite his intentions of indifference and overwhelming feelings of heartbreak, relays an instant, if hesitant, connection to Chang. Their time together is limited to the fast-paced kitchen environment where they work and where Chang regularly stays overtime to survive financially, but when Lai Yui-fai cooks him dumplings one night it immediately recalls his similar nurturing of Ho Po-wing in his time of injury. It's a relationship that never moves beyond the platonic (there are the minor details, too, that prove Chang is straight), yet there is an undeniable charge in their shared moments, especially considering Chang is hyper-sensitive to Lai Yui-fai's emotional state given his unusual condition of heightened hearing and defective sight. As is so typical of Wong's films however, potential connections are swiftly extinguished as people are separated geographically, succumbing to the flow of the impersonal globalized environment. Still, in a poetic epilogue intercut with Ho Po-wing's embrace of a Iguazu-themed lamp that sits in the lovers' apartment throughout the film, feelings of attachment are memorialized across spaces, as Chang listens to a tearful voice recording of Lai Yui-fai in a remote region in the south of Argentina and Lai Yui-fai visits Chang's family business at his home in Taipei. Material evidence of connection trumps connection itself. 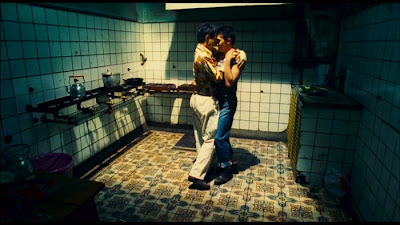 These memorials also point to a potent longing for a paradise, for something beyond the ordinary (family, new locations, love), which can be linked to Hong Kong prior to British colonization. Such a backwards-looking perspective necessarily shrouds the future in uncertainty, leading to Ho Po-Wing and Lai Yui-fai’s failure to commit. It’s as if in setting his film in a foreign land, Wong is suggesting that 1997 marks the complete and utter disappearance of Hong Kong as an independent culture and the reinvention of the city as something alien even to longtime inhabitants. The lovers feel a desire to leave because they feel the growing disconnect from permanence and tradition. Not only is Hong Kong displacing itself from the country that afforded it the luxuries of capitalism for over a century, it is also attaching itself to a country that is now comparatively less developed in the avenues of technology and economy. Therefore, a radical illusion of a temporal shift occurs: the future, represented by Hong Kong’s vast technological gridlock, is returning to the authority of a politically distinct and technologically slower China, emblematic of the past. All of this leads to a heightened fracturing of time, which has forever been Wong’s visual forte. Happy Together, despite adhering to a linear narrative approach, utilizes an editing system that implies a disruption of chronological time, jumping occasionally from the urban squalor of Argentina to the waterfall at Iguazu, or taking jarring stylistic leaps such as from black-and-white to color, or from film noir to romance. The outside world is reduced to a blur, whipping by these characters in their walled-off torments, either right-side-up or upside-down.

Ho Po-Wing and Lai Yui-fai’s romance becomes an allegory for the turbulence of this uniquely global city, comprising as it does an initial level of comfort, then a prolonged era of confusion and frustration, and finally a complete extinguishing of affect, a disappearance of the entity. But Wong does not view this new phase with total cynicism; rather, his perspective is surprisingly light and forward-thinking, shedding the melancholy weight of the narrative proper at the end to muse on the possibility of new connections. (The inevitable subject of the film’s title perhaps has more to do with Lai Yui-fai and Chang’s tenuous relationship than with the unstable romance at the center of the plot.) While Hong Kong threatens to reduce the characters to ghosts without identities wandering in a limbo state between constancy and progress, they have continued to deal with these conditions by leaving, splitting apart, regrouping, and starting anew; always restless, Wong's lonely figures are at the very least striving for something meaningful.
Posted by Carson Lund at 11:57 AM

Argentina can totally be represented that way. Usually, tourists that come from totally different countries are surprised to see that people in Argentina are not sad as tango show, but happy and ecstatic. I was able to see the way they behave since I stayed in Argentina for a year when I was young. I had rented this Buenos Aires real estate and I made really good Argentinean friends. They are super positive human beings, hard workers and enthusiastic about life. Nothing that happened in the past makes affects them, they always look forward a new, exciting future. If you go, you realize that after being there for 3 days!