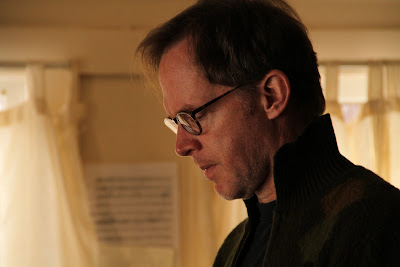 About four months ago in the introduction to my new "Screening Notes" series, I hinted towards a film I was working on that was getting in the way of watching movies. The good news is that that film is now finished and I'll have more time to focus on writing. Seriously, seeing other films while attempting to dive into your own project can result in some serious cognitive dissonance.

Anyway, because it was such an all-encompassing project that consumed my attention for the better part of five or six months, I'd like to share it here. It's called Bardo, and it's about a composer (the titular character) who is struggling with tinnitus while attempting to finish his final masterpiece. The story is inspired in equal parts by Beethoven and Tchaikovsky, the former of which faced harsh ringing before finally going deaf and the latter of which had a troubling and tense social life. I worked as cinematographer on the film, but it was really a deeply collaborative effort between myself and three other talented friends and colleagues. The film was shot on 16mm, making it the first time in my life I have actually shot a full project on film. We're all very proud of the finished product and would love to hear anyone's thoughts on it!

Bardo can be found here.
Posted by Carson Lund at 2:06 PM