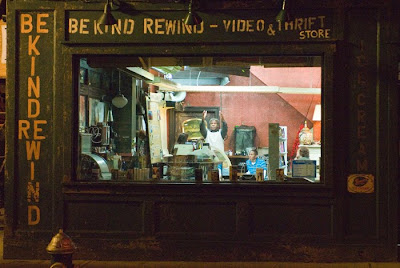 Let it be known: Be Kind Rewind marks the first instance on this blog of me so thoroughly doubling back on an old post, deleting it, and rewriting my evaluation. Rarely have I found a first assessment so off base after a second viewing. My instincts usually land me somewhere in the ballpark, but what seemed like an uninspired trifle that was too cute and contrived in its dewy cultural critiques the first time around (and salvaged only sometimes by flashes of humor) stood out as an enormously heartfelt celebration of folk culture wrapped up in nearly flawless, well-paced entertainment the second time. Also, as pure comedy, Gondry's fifth feature is a gem, hysterically held together by the perfectly cast duo of Jack Black and Mos Def. Black, bumbling and discursive as ever, plays the self-congratulatory Jerry Gerber, the "star" of a series of abbreviated fan-produced blockbusters made at a modest little New Jersey video store, and Def is his dramatic foil Mike, a hesitant, proper employee at the store who is all too fearful of corrupting his reputation with Mr. Fletcher (Danny Glover), the store's veteran owner who is on a business trip in an attempt to pillage the airtight wisdom of a corporate video store. Jerry and Mike are forced to "remake" the numerous Hollywood movies in the store when a robbery-gone-wrong at the local power plant finds Jerry literally magnetized (a playful, absurdist touch), thus unintentionally erasing the VHS tapes that still comprise the entire catalog.

In terms of general narrative sweep, this is a relatively straightforward, by-the-numbers feel-good movie; that is, one in which the underdogs (Mr. Fletcher, Mike, and Jerry) combat a series of misadventures to stick it to the big guns of the media industry (Sigourney Weaver arrives as an uppity enforcer) that threaten to punish them for copyright infringement. It's ultimately only a humble, tentative triumph, nothing that would get their names in the news as cunning revolutionaries against corporate oppression, but a triumph nonetheless. All of their homemade movies, which gradually become the talk of the town, are instantly steamrolled by Weaver's comrades, forcing them to make their most audacious leap of faith. They devise the plan to produce - with the assistance of the various townies who have become regulars at the store - their own original short film based on the life and times of Fats Waller, a legend of the uptown Jazz movement of the roaring twenties who maintains nostalgic value for Mr. Fletcher. In doing so, they're making a small, if substantial, effort towards swimming upstream against the inexorable, often tyrannical flow of mass media, and making a case for the individual over the machine. What reeks of predictability and didacticism is more than redeemed by the tremendous amount of heart and tongue-in-cheek charm throughout. It doesn't take itself too seriously, and doesn't pin itself down to one all-encompassing, negative view of mass culture. 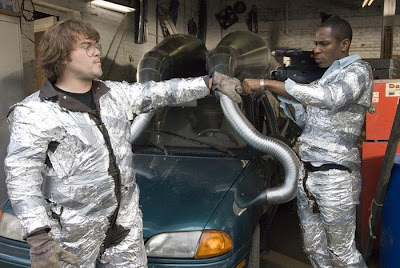 In fact, while on the one hand Gondry is lambasting the impersonal nature of mass media and the ways in which it often cultivates a passive audience, he is also celebrating the lasting spark that such films can and frequently do induce. Jerry and Mike know these movies so well that they can fire through a faithful, albeit superficially ridiculous, interpretation of them in under a day and with boundless enthusiasm. What's more, their customers can rent these movies, notice the boorish discrepancies from the original, and still come back for more, enraptured and unexpectedly impressed by the scrappy layman's versions, stirring up as they do fond memories of the source movies themselves. Beneath this is a reassuring statement from Gondry that whatever the box-office profits of a big-budget feature, whatever the high-falutin' intentions of a major production studio, that it is ultimately the audience who owns the movies in the long run, the vast majority who form potent mental imprints of their individualized experiences of the media. It's an uplifting view of culture, antithetical to the widespread pessimism regarding the "death of movies and art", and nowhere is it more evident than in Gondry's beautifully rendered climax. For all the film's silly, nonchalant humor, the final scene is pure pathos. As the destruction crew waits impatiently outside, the town gathers together in the video store to screen their finished Fats Waller film. The projector's flicker (partly produced by the machine itself and partly a result of Mike and Jerry's foolhardy aesthetic decision to place a household fan in front of the lens to conjure the look of an old-fashioned film) dances across the faces of the rapt audience, alternately laughing and crying at the various roles they played in the film. Gondry's utterly aware of how cheesily meta the scene is, but it's genuinely moving anyway.

Be Kind Rewind's films-within-a-film ultimately owe more to Gondry's faux-DIY visual style than the commonplace look of the film itself, but I can take this small compromise as a necessary move from an indie eccentric attempting to make a message movie about mass culture products from within Hollywood. That's not to say there's an unforgivable shortage of imagination at work here; the shoddy special effects that Jerry and Mike employ to their adaptions, like pizzas behind people's heads to suggest blood, night vision to appropriate evening fight scenes, or numerous cardboard miniatures, are priceless. And Jack Black's performance is one of his most memorable, as it usually is when he's this unhinged. Stumbling around the sets like there is serious cash at stake, his larger-than-life swagger and sense of stray filmmaking knowledge ("you know, you gotta wet the ground!") is hilariously measured. The film is further proof that Gondry is not entirely impotent when reduced to his own material, still capable of crafting charming, emotional works.
Posted by Carson Lund at 9:39 AM