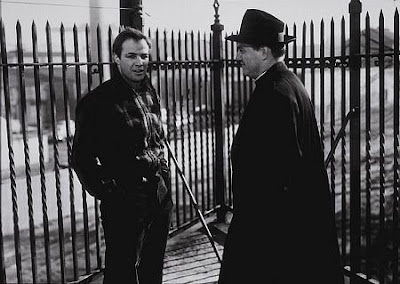 On the Waterfront marks a rare instance where we explicitly know a filmmaker's intentions in creating a film. Elia Kazan testified during Anti-McCarthy trials against some of his colleagues whom he was certain of Communist activity and was subsequently accused of betrayal. The road to this declaration was of course a difficult one that wore heavily on Kazan's conscience, and this is precisely what he details in On the Waterfront. Although he loosely cloaks it in a true story of a longshoreman who similarly betrayed the corrupt union he worked for, the film is really Kazan's saving grace, an elaborate attempt at using cinema as a means for self-liberation.

In this sense, Marlon Brando, who plays the role of an ex-fighter notoriously accused of being a "bum", really plays the director. When Terry Malloy (Brando) becomes unwillingly involved in the murder of a fellow dock worker, Joey Doyle, he finds himself caught between the persuasive hand of Father Barry (Karl Malden), who urges for him to testify against the Union, and the loyalties of his brother Charley (Rod Steiger) and Johnny Friendly (Lee J. Cobb), the fraudulent boss/closet gangster responsible for both Terry's former success as a fighter and his subsequent career collapse. To complicate matters, Terry finds a love in the angelic Edie (Eva Marie Saint), Joey Doyle's sister whom Terry feels guilty towards. Budd Schulberg's screenplay has all the makings of a deft melodrama but Kazan infuses it with heavy doses of neorealism. The interplay of character motivations makes for some engaging viewing; Terry's aforementioned interior battle of guilt, brotherly allegiance, and thirst to prove himself a well-meaning man, Edie's uncertain attachment to Terry, Father Barry's hard-nosed pursuit of justice, and Johnny Friendly's crooked predilection towards evil.

What binds it all together is the acting, most famously Brando's. His virile, hardened, yet gentle mannerisms foreshadow 50 ensuing years of outsider characters involved in mob business, namely the players in Scorsese films or Brando's own later turn in The Godfather. Frequently, Brando can transmute the notion of a sparring conscience into one downplayed facial expression or shrug. It is also true that he is often improvising in front of the camera, doing so with great comfort and grace. Although Kazan gets strong performances from nearly every other actor surrounding him (James Westerfield is a highlight as one of Terry's fellow workers who is supplied with several hysterical lines), the attention is always on Brando without being overwhelmingly one-sided. If any element has not aged well however, it's the grand and uplifting finale and Leonard Bernstein's intrusive score, which cuts into dialogue scenes with haphazardness. Given that the real longshoremen failed when testifying against his corrupt union, Terry's triumphant rise from a beating ("Am I on my feet?") feels enormously romantic. All criticisms aside, Kazan's cogent direction, Brando's show-stopping performance, and Boris Kaufman's stellar lighting justify On the Waterfront's stature as an American classic.
Posted by Carson Lund at 10:32 AM

I find this comment humorous, but I'm unsure of whether you're for or against the HUAC. The question is, are you for or against American movies? Do you think the HUAC destroyed On the Waterfront, because this film was made years before 1983.