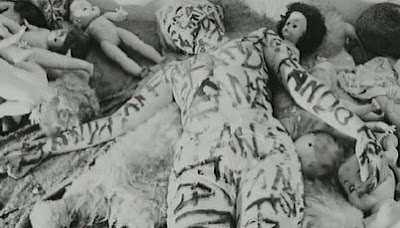 Cult surrealist Alexandro Jodorowsky's debut film Fando Y Lis caused riots upon its release in 1968, and subsequently became lost for 30 years. It's discovery is a crucial step in getting a full Jodorowsky triple whammy, when placed alongside 1970's El Topo and 1973's The Holy Mountain. The film is the initial signs of blasphemous life (save his previous short film La Cravate) from one of cinema's most insane provocateurs. Jodorowsky's characteristically mythic storytelling - kitschy imaginings of the ancient etchings which his films often form their shape around (in Fando Y Lis' case, the opening credits closely resemble the graphics that open Zelda: Windwaker) - involves a hapless couple, both of whom have survived bizarre childhoods, traversing the world's rubble in search of the spiritual city of "Tar". "Tar" promises spiritual ecstasy, as it's the last remaining city after all were destroyed, and eternal happiness for the damaged (and in fact never even translucent) relationship of Fando and Lis.

Their trip is relentlessly burdened by ludicrous freak-shows that rummage through the rocky landscape and a sadomasochistic rivalry that always trumps the borders of reality. As the film progresses, the two sink further and further into madness, as Lis' desperate cries for Fando (which recall Gelsomina's for Zampano in Fellini's La Strada) become more and more inane. A laundry list of sight gags is available in Fando Y Lis, and as with most of Jodorowsky's work, attempting to commit to language the breadth of visual originality present in his preposterously hilarious images would most certainly ruin the indescribable feelings they evoke. Here his camera style is at its most primordial; the overexposed, high contrast black and white hand-cam shots differ greatly from some of the eye-popping cinematographic calculation that emblazoned The Holy Mountain, but one can still sense Jodorowsky's presence behind the camera. There are his obtuse zooms, bird's eye view observations, and deliberately nonrhythmic edits. Not to mention the soundtrack, while naturally rougher around the edges than in his later work, is typically contradictory and irritating (a peaking track of what sounds like a cluster of buzzing bees accompanies a scene involving elderly woman at a dinner table aside the dusty environment).

Although Jodorowsky throws several ideas together in tangled webs in his films (in Fando Y Lis, there is a generous helping of elementary symbols such as eggs or white ponies), there tends more often than not to be a coherent schema. The city of "Tar" seems to have the general notion of a utopia, or a God, but throughout the film it is unattainable, much like "The Holy Mountain" is. Lis even states in optimism, "If Tar does not exist, then we'll invent it". Jodorowsky's films function as elaborate methods of pushing aside humanity's profound claims, so that one can attempt to enjoy the wonder and absurdity of life that already is ubiquitous. Whether Jodorowsky took beaver tranquilizers while directing his films or not, there is an undeniable wealth of imagination that imbues his unceasingly wacky world.
Posted by Carson Lund at 8:58 PM